The two-wheeler sector has been underperforming its peers on the volumes front for over five quarters now. 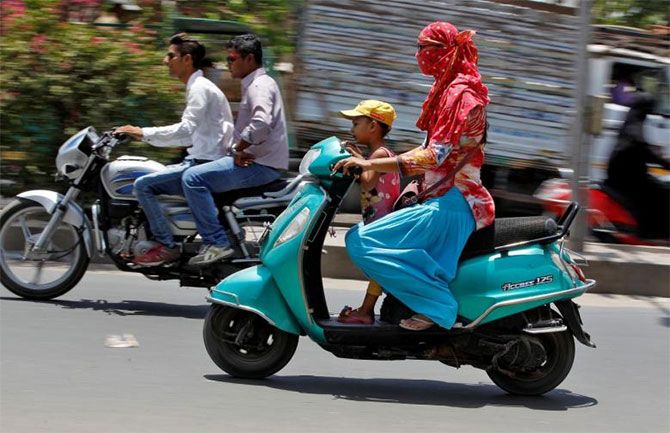 Even in the March quarter, Bajaj Auto and Hero MotoCorp posted a 17-24 per cent YoY decline in volumes, the sharpest in the listed auto universe.

What has aggravated the situation for two-wheeler companies, which get almost all their sales from the internal combustion engine or ICE-based units, is the traction for electric two-wheelers (EV).

Though it was a subdued showing over the year-ago period, brokerages point out there was an uptick in volumes on a MoM basis.

The ongoing wedding season and opening up of education institutes and offices are leading to good enquiries for the entry and executive segments in motorcycles, he adds.

Further, IIFL Research believes there are silver linings in the rural segment.

Money flow into the rural economy has improved, thanks to central government schemes, pick-up in rural disbursements by microfinance institutions and banks, and resumption of migration of workers to cities from rural areas, says the brokerage.

The recovery in the rural segment is critical for the two-wheeler space as it accounts for half the overall domestic two-wheeler sales.

Brokerage recommendations for listed majors — be they domestic-oriented, entry/executive dominant companies such as Hero MotoCorp, or export plays, such as TVS Motor and Bajaj Auto, or premium bike makers like Eicher Motor — are varied.

While the market leader, Hero MotoCorp has been a big underperformer over the past year, analysts expect it to do well.

It is the only two-wheeler stock that has generated a negative return, losing 17 per cent over the past year.

The returns gap with the peer index Nifty Auto and the Nifty over the past year is over 30 per cent.

In addition to the rural recovery, Sharekhan Research expects it to benefit from the premiumisation of its products, recovery in its stronghold segments of the economy, executive motorcycle, and aggressive products offerings in the premium bike and scooters segments.

Hero’s roadmap for EV is convincing, given its preparedness and investments in technology and strategic partnerships.

The company launched the Vida brand for e-mobility solutions in March 2022.

Even as the Street is positive about Hero MotoCorp, some brokerages have a ‘sell’ rating on premium bike maker Eicher Motor.

JM Financial points out the company was not able to get desired volumes traction despite new product launches and network expansion.

Supply constraints and new competition, too, may have been responsible for the lack of volume uptick for its products.

Despite similar headwinds (price hikes of 20-30 per cent over the last five years), premium bikes have not been able to replicate the success of their utility vehicle (UV) counterparts.

While the UV segment has grown at 14 per cent, the premium segment (bikes over 250cc capacity), including Royal Enfield (two-wheeler division of Eicher), has slipped by 4 per cent over the last five years, they point out.

It has a ‘sell’ rating due to lack of visibility/consistency in monthly wholesales of Royal Enfield.

ICICI Securities has downgraded Bajaj Auto to hold earlier this month as it believes that the stock is perfectly priced (post its rally) amid worsening outlook on profitability, rising fuel prices, and flattish demand outlook in key export markets.

Exports for two wheelers are showing signs of consolidation in the past 4-5 months, with volumes either stabilising or declining.

They expect exports to post 8 per cent annual growth over FY22-24 (after 23 per cent growth in FY22) as compared to 12 per cent growth for its domestic portfolio in the same period on a lower base.

The Street is positive on the prospects of TVS Motor. The stock is the top pick of Jefferies Research, which believes that in addition to strong volume growth from the domestic market, the company has good product capabilities in scooters and premium bikes.

They also say that there is scope for margin expansion as the company has the lowest margins among the listed bike makers.

While EVs are the biggest threat to the listed majors, Nirmal Bang Research highlights incumbent two-wheeler makers will clearly have the cost advantage over the new-age start-ups, owing to their high scale of operation, efficient procurement practices, and their ability to scale up the available infrastructure.