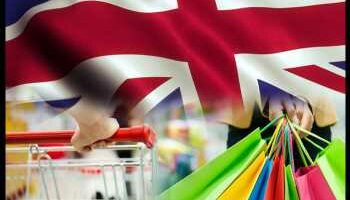 Retail sales gained 0.3 percent on month, in contrast to the revised 0.2 percent fall in June. Sales were forecast to fall 0.2 percent in July.

Overall sales volumes were 2.3 percent above their pre-coronavirus February 2020 levels.

Food store sales edged up 0.1 percent in July. Non-food stores sales decreased 0.7 percent because of falls in other non-food stores and clothing stores.

Automotive fuel sales decreased 0.9 percent with anecdotal evidence that the heatwave across parts of the UK may have reduced travel and sales, the ONS said.

On a yearly basis, the retail sales volume declined at a slower pace of 3.4 percent after easing 6.1 percent in June. Nonetheless, the pace of decrease was slightly faster than economists’ forecast of -3.3 percent.

Likewise, the annual fall in retail sales, excluding auto fuel, eased to 3.0 percent from 6.2 percent in the previous month. The expected rate of fall was 3.1 percent.

The GfK consumer sentiment index fell to -44 in August, the weakest since records began in 1974, from -41 in July.

“A sense of exasperation about the UK’s economy is the biggest driver of these findings,” Joe Staton, Client Strategy Director at GfK said. “These findings point to a sense of capitulation, of financial events moving far beyond the control of ordinary people.”

The major purchase index decreased by four points in August to -38, the survey showed. Meanwhile, the savings index rose five points to 18.