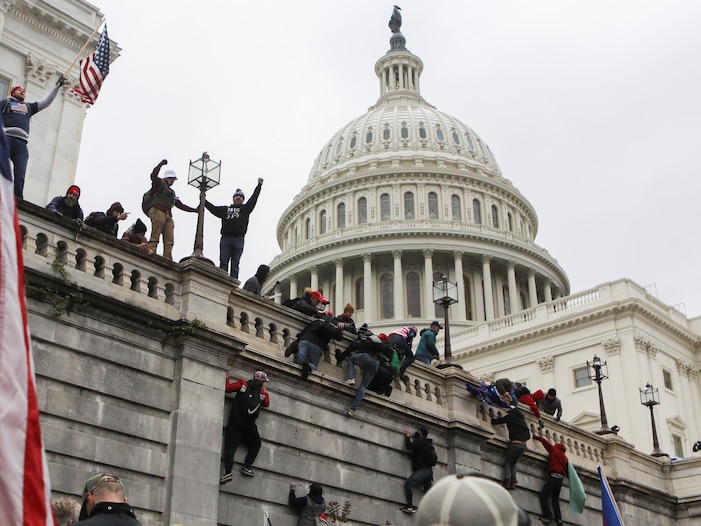 US stock futures rose on Thursday, as investors looked past the chaotic scenes on Capitol Hill on Wednesday towards a Joe Biden administration that will have a freer hand to boost fiscal stimulus after the Democrats won two key runoff races in Georgia.

Yields on 10-year US Treasury notes moved higher above 1%, as investors shifted out of safe-haven bonds, despite supporters of President Donald Trump storming Congress on Wednesday in an unprecedented spectacle during which a woman was fatally shot.

The market reaction to the violence was muted, with the S&P 500 and Dow Jones closing higher but the Nasdaq slightly lower.

The dollar index made minor gains of about 0.16%, but still traded at around its lowest since early 2018 against a basket of major currencies.

The VIX index – a market-based indicator of investor anxiety – rose more than 10% on Wednesday to around 26%, thanks to the tight runoff races in Georgia and unrest in Washington, DC. The index retreated overnight and was last down 6.34% to 23.48 in mid-morning European trading.

Analysts said the driving force behind market movements was not the protests, but the Democrats’ victories in Georgia, where Raphael Warnock and Jon Ossoff both unseated Republicans on Wednesday. The wins will hand the Democrats control of the Senate via Vice President-elect Kamala Harris’ tie-breaking vote.

“The Senate results mean that the so-called ‘blue wave’ scenario has finally come about, albeit via a tortuous journey, resulting in a slim Democratic majority in both chambers of Congress,” said Jim Reid of Deutsche Bank in a note.

“The main implication being the prospect of a substantially larger US stimulus package once President-elect [Joe] Biden comes to office, and giving further support to the reflation trade.”

US government bonds yields moved higher, as investors predicted that more stimulus would lead to stronger growth and inflation. Traders also anticipated that stronger fiscal support would mean the Federal Reserve would need to add less monetary stimulus in the bond markets.

The yield on the benchmark 10-year Treasury, which moves inversely to the price, rose 1.5 basis points to 1.058%, having recently crossed the 1% threshold for the first time since the coronavirus pandemic began last year.

Kristoffer Kjær Lomholt, chief analyst at Danske Bank, said the Democrat victories were “positive for reflation trades”. That is, bets on cyclical stocks such as financials and industrials that have underperformed during the coronavirus crisis and would be boosted by growth and inflation.

“It increases the chance of further fiscal easing near term, but most likely also limits how much Biden can raise taxes further down the road. This has been the catalyst for 10-year US Treasury yields moving above 1% for the first time since March.”

The continent-wide Stoxx 600 was up 0.1% but the UK’s FTSE 100 fell into the red after gaining almost 7% in the first three sessions of the year.

Halley said: “Markets will continue to focus on the potential [US] Democratic agenda, which should be broadly positive for cyclical sectors.”

UBS analysts said in a note: “Volatility over the prospects of a unified government will be short-lived and soon overshadowed by investor expectations for the winding down of the pandemic in the months ahead.

“We retain a positive longer-term outlook for US equities in general, and cyclicals and small- and mid-caps in particular, as the economic recovery accelerates in the second quarter.”

Read more Wall Street experts are calling Georgia’s runoff results ‘the first surprise of 2021.’ Here’s how 4 of them recommend positioning your portfolio for what could happen next.