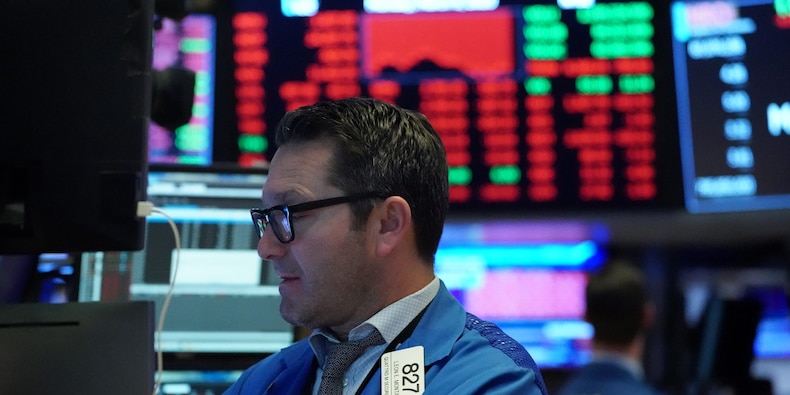 Biden is projected to be the next US president after taking the lead in Georgia and Pennsylvania on Friday, according to data from Decision Desk HQ. His advances in Pennsylvania, where President Donald Trump had been winning, put Biden above the 270 electoral votes needed to be named president-elect.

The election’s conclusion came after more than two full days of ballot counting and anticipation across the country. Republicans are still favored to maintain control of the Senate, creating the divided-government scenario investors warmed up to throughout the week.

Here’s where US indexes stood at the 4 p.m. ET market close on Friday:

Traders unwound bets on election outcomes as major stock indexes closed in on posting their best weekly gains since April. Energy and financial stocks fell the most, while the tech and consumer staples sectors gained slightly.

Premarket stock futures trimmed early losses after the government’s monthly nonfarm-payrolls report showed a stronger labor-market performance than expected. The US economy added 638,000 jobs in October, more than the 580,000 additions expected by economists surveyed by Bloomberg. The improvement was still smaller than the 672,000 job additions in September.

The unemployment rate fell to 6.9% last month from 7.9%, the Bureau of Labor Statistics said. Economists had expected the rate to hit 7.6%.

The report marked the sixth straight month of job additions since the coronavirus outbreak drove outsized losses in April. While the pace of recovery has slowed from its initial rebound, Friday’s reading suggested the economy was healing faster than anticipated despite a lack of new fiscal support.

Read more: Raymond James’ investment chief details why Joe Biden and Mitch McConnell are the perfect pair to drive markets upwards — and lists 4 sectors he thinks are primed for gains no matter who’s in power

“This loss of momentum is set to continue, and we do not anticipate payroll employment returning to its pre-COVID level before the end of next year,” said Seema Shah, the chief strategist at Principal Global Investors.

Soaring virus cases in the US threaten to further curb the bounce-back. The country reported more than 121,000 new COVID-19 cases on Thursday, becoming the first nation to report a single-day increase of more than 100,000. With advanced economies around the world reinstating lockdown measures as their case counts surge, similar actions in the US could freeze hiring activity.

Peloton tumbled after supply constraints disclosed in its quarterly report overshadowed Wall Street upgrades and strong earnings. The stock has been among the market’s biggest winners in recent months, but a product shortage ahead of the critical holiday season could slam revenue goals.

Aurora Cannabis spiked higher as the prospect of a Biden administration boosted pot stocks. Democrats had previously indicated they would aim to decriminalize marijuana at the federal level should they take the White House.

Read more: Richard Lawrence manages $6 billion and only buys 1 out of every 100 stocks he looks at. He details his simple 4-part recipe for sniffing out the market’s next big winner.

Bitcoin traded above $15,500 as its rally extended into Friday. The token sat as low as $13,270 earlier in the week but surged in recent sessions amid election volatility and strong momentum.

Spot gold swung as much as 0.6% higher, to $1,960.44 per ounce, as its own rally continued. The US dollar dipped to a two-year low against currency peers, and Treasury yields swung higher following the nonfarm payrolls report’s release.

Oil futures tumbled below the $40 support level on concerns that a virus resurgence would slam demand. West Texas Intermediate crude fell as much as 4.5%, to $37.06 per barrel. Brent crude, oil’s international benchmark, sank 3.9%, to $39.34 per barrel, at intraday lows.

The chief strategist at JPMorgan’s $2.3 trillion investing arm says the US elections could resolve a ‘polarized’ stock market amid sharp political divisions — and pinpoints 4 trades that are likely to benefit