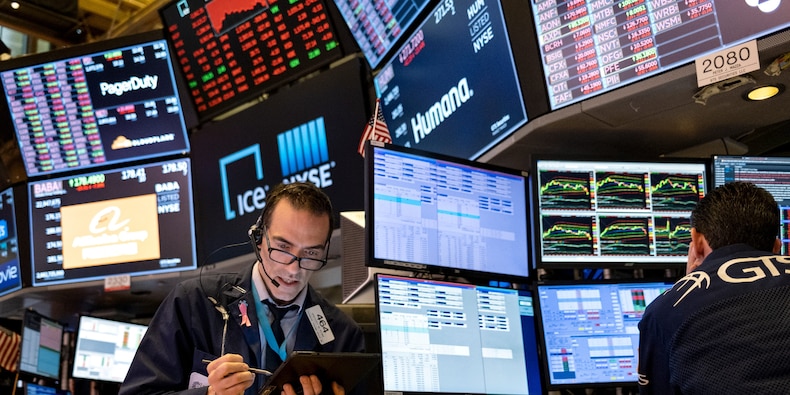 US stocks edged higher on Wednesday investors brace themselves ahead of President Joe Biden's unveiling of a multi-trillion dollar spending plan.

The bill will include major investments into a range of sectors, and investors are absorbing its potential impact on both inflation and earnings as a large part is to be funded with tax hikes on corporations. The bill is part one of two in Biden's overall infrastructure plan, with the second to be announced in mid-April.

Rising Treasury yields, meanwhile, continue to put pressure on stocks, especially high-growth tech names that soared during the year of the pandemic. The benchmark 10-year US Treasury yield rose to its highest in 14 months on Tuesday, as investors priced in expectations of higher inflation and a stronger US economy.

The US private sector added 517,000 jobs in March, according to ADP's monthly employment report Wednesday. Economists surveyed by Bloomberg held a median estimate of 550,000 payroll additions. This climb is the third straight monthly gain since payrolls shrank in December. The March gains are also the largest seen since October.

Here's where US indexes stood at the 9:30 a.m. ET open on Wednesday:

Stocks affected by the Archegos-linked selloff that roiled markets rallied. ViacomCBS and Discovery were both higher, as well as American depositary receipts of Chinese companies.

Goldman Sachs on Wednesday said it could begin to offer bitcoin and other digital-asset-related investments to its private wealth-management clients, CNBC first reported.

Ethereum developers defended a decision to destroy ether tokens and cut the fees paid to miners ahead of major changes this summer. The developers said the changes could boost the cryptocurrency's price.

West Texas Intermediate crude climbed as much as 0.12%, to $60.48 per barrel. Brent crude, oil's international benchmark, also rose by 0.42%, to $63.87per barrel. Both benchmarks are on track for weekly losses.

Gold slipped 1.47% to $1,687.47 per ounce. The precious metal slipped below $1,700 on Tuesday for the first time in three weeks, under pressure as long-dated Treasury yields and the US dollar both rise.