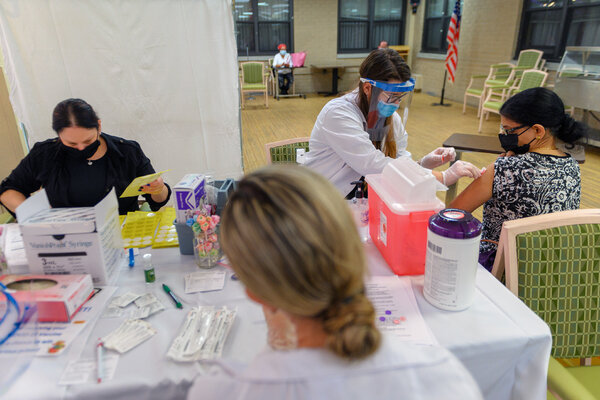 Walgreens has inoculated hundreds of thousands of Americans against Covid-19 this year using the vaccine developed by Pfizer and Germany’s BioNTech. But the pharmacy chain has not been following guidance from federal health officials about the timing of second doses.

People are supposed to get two doses, three weeks apart. Walgreens, however, separated them by four weeks because that made it faster and simpler for the company to schedule appointments.

There is no evidence that separating the doses by an extra week decreases the vaccine’s effectiveness. While the Centers for Disease Control and Prevention recommends a three-week gap, the agency says it is acceptable to separate the doses by up to six weeks if necessary.

But Walgreens’s decision, which it didn’t publicly announce, confused some customers and caught the attention of federal health officials. Kate Grusich, a spokeswoman for the C.D.C., said the agency had asked Walgreens to stop using a longer-than-recommended time period between doses.

The company’s vaccine-scheduling system by default schedules all second doses four weeks after the first. Doses of Moderna’s vaccine, which Walgreens is also administering, are supposed to be spaced four weeks apart. Using the same gap for both vaccines was “the easiest way to stand up the process based on our capabilities at the time,” Dr. Kevin Ban, Walgreens’s chief medical officer, said in an interview.

Now Walgreens is changing its system. Starting as soon as the end of the week, the pharmacy will automatically schedule people for Pfizer doses three weeks apart, Dr. Ban said.