What a U.K. Staycation Looks Like in a Pandemic

ISLE OF WIGHT, England — For the second year running, a hallowed rite for millions of people in Britain — decamping to the warmer climate of the Mediterranean — has been disrupted by the pandemic. The number of flights in and out of Britain are half their 2019 levels.

This year, the Isle of Wight, a small island off the south coast of England, has lured even more visitors to its sandy beaches, coastal walks and arcades. But pandemic restrictions, staff shortages and the often uncooperative British weather are challenging visitors and business owners this season.

Like many popular British vacation spots, such as Cornwall and the Lake District National Park, the Isle of Wight is suffering from a shortage of workers, especially in hotels and restaurants. One problem is that people have had to self-isolate for 10 days after being pinged on the country’s coronavirus tracing app. This constraint might ease beginning Monday because fully-vaccinated people will no longer be asked to isolate if they come into contact with someone with the virus. But there are more persistent restraints: Many workers have taken jobs in other sectors seeking more secure work. And Brexit hasn’t helped — the pool of European Union nationals working in Britain has shrunk by the hundreds of thousands.

As a result, small businesses on the island are unable to fully benefit from the rise in visitors. They are wary of overextending and not having enough workers to meet demand. Instead they are restricting how many people they serve and limiting the hours they are open. 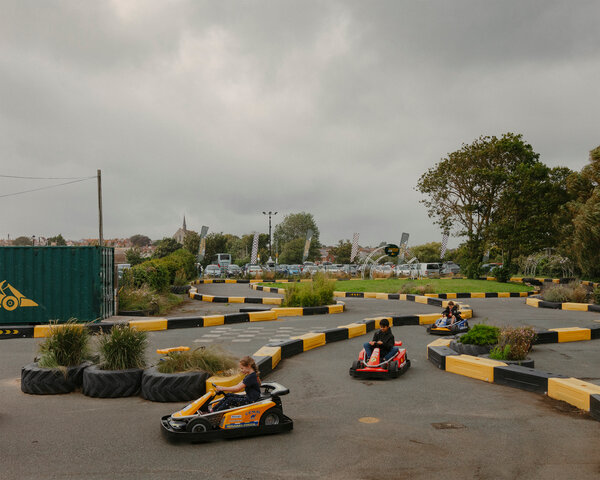 One of those business owners is Yvonne Richardson, who opened Bellamy’s Bistro 14 years ago in Sandown, on the southeast coast of the island. While coping with a small staff, she has had a busy summer.

Even so, with extra spaces between tables and longer turnaround times between diners to allow more time for cleaning, the restaurant is taking in less money than before the pandemic. Bellamy’s Bistro hasn’t been able to extend its hours to accommodate the extra visitors, either. Its kitchen is running from 10:30 a.m. to about 2:30 p.m., before reopening at 5:30 p.m. for two and a half hours. The restaurant is closed on Sunday nights and all day on Monday to give the team a break.

“Everywhere has had a bit of a problem with staff shortages,” Ms. Richardson said. “We’re quite lucky that our chefs come back to us every year. But getting extra staff would have been impossible.”

At Osborne House, a palatial summer residence built for Queen Victoria and Prince Albert in the mid-19th century, visitors waited in long lines because of Covid safety measures, such as timed and ticketed entry.

Newport, the main town on the island, is experiencing problems similar to many of Britain’s town and cities. Even as visitors increase, storefronts continue to close. The collapse of large retail brands and the shift to online shopping has hollowed out many high streets.

Ms. Richardson hopes that the revival of the British staycation — if it lasts — could revitalize Britain’s seaside towns. She also used to holiday regularly in Spain, the most popular British travel destination. In 2019, residents of the United Kingdom made 18 million visits there.

“Over the years where it got cheaper and cheaper to go to Spain,” she said. “But unfortunately the British seaside towns suffered for that,” she said.

West of Newport is the Calbourne Water Mill, a working flour mill with a restaurant, museum and cottages to rent. The property evokes the island’s deep history, with records indicating that mills operated on the site as long ago as the 11th century.

The mill’s owner, Sally Chaucer, said she had been busy accommodating new and longstanding customers since reopening in mid-July. Still, because of a smaller kitchen staff, the business has pared its food offerings. Ms. Chaucer said she had also reduced the workload for her small staff, like cutting the number of museum talks, so she’s not competing with other local businesses for workers. Entry to the mill’s property is currently half price.

The boom in staycations has made Ms. Chaucer optimistic. With new visitors discovering the island, she might expand into winter vacations and become a wedding venue. “It’s just a marvelous place to come and escape everything,” she said.