Why the arrest of Huawei's CFO matters

Ottawa (CNN)The Chinese government is pushing Canada to release Meng Wanzhou, the Huawei chief financial officer detained for violating US sanctions on Iran, as Ottawa braces for relations with Beijing to worsen and urges President Donald Trump not to politicize the situation.

Canadian government officials have asked for, and received, additional security at their diplomatic outposts in China, while Canadian companies that do business with China are bracing for lower sales and even a boycott of Canadian products.
The arrest has put the Canadian government — which has its own trade and other disputes with the Trump administration — in the awkward position of defending its role in honoring reciprocal law enforcement arrangements with the US, just as President Donald Trump has suggested he might be willing to drop the Meng case in exchange for a trade deal with Beijing.

The CFO of Chinese tech giant Huawei was arrested December 1 in Vancouver for violating US sanctions on Iran — the same night Trump was dining with Chinese President Xi Jinping during the G20 summit in Argentina.

China’s state-run media has repeatedly claimed that Meng’s detention appears to be politically or economically motivated. Trump’s suggestion that he could use Meng as a bargaining chip in trade talks — a flagrant breach of the US practice of separating politics and issues of the law — has complicated the situation for Canada and fueled outrage in China.

“The Chinese side strongly urges Canada to immediately rectify its mistakes, and release the detained Chinese citizen and truly guarantee their relevant legal and just rights,” Chinese Foreign Ministry spokeswoman Hua Chunying told reporters Sunday at a regular Ministry of Foreign Affairs briefing. “We strongly urge the US to revoke the relevant person’s arrest warrant immediately.”
Trump told Reuters in an interview last week that he might intervene in Meng’s case if it would help the United States and China reach a trade deal.
“If I think it’s good for what will be certainly the largest trade deal ever made, which is a very important thing, what’s good for national security, I would certainly intervene if I thought it was necessary,” Trump said.
That drew a rebuke from Canadian Foreign Minister Chrystia Freeland the next day. “Our extradition partners should not seek to politicize the extradition process or use it for ends other than the pursuit of justice,” Freeland told reporters.
China has detained two Canadians in the wake of Meng’s arrest. Last week, Freeland confirmed the detention of Michael Kovrig, a former Canadian diplomat now with the International Crisis Group, a nonprofit organization. A second Canadian, businessman Michael Spavor, has also been detained. 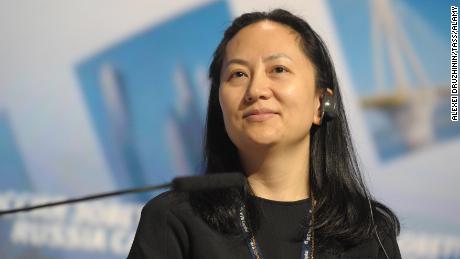 For now, China has directed its anger at Canada, but the standoff highlights the potential for increased tensions between Beijing and Washington.
The US has pending indictments against Chinese government hackers by the Justice Department for violating a 2015 pact by stealing American intellectual property and a cyberattack on the Marriott hotel chain linked to Chinese-intelligence gathering efforts that affected nearly 500 million guests.
“China is clearly being impulsive here, they’re lashing out and they’re not interested in building any political capital with Canada,” said James Zimmerman, a partner with the law firm Perkins Cole who formerly represented a Canadian couple detained by Chinese authorities in 2014 accused of spying.
“This plays very well to those nationalists in China who argue that arresting the Huawei executive was pushing China too far,” Zimmerman said.

Things could get worse

Many Chinese social media accounts are expressing outrage with Canada’s move to execute the arrest, even though Canadian officials, including Freeland, say Canada was just following the terms of its extradition treaty with the US. Freeland said that she’s talked with American Secretary of State Mike Pompeo about the case.
Officials from Global Affairs Canada told CNN that relations with China could get worse.
“It has been very public, as you know, and it has been on social media and the Chinese government has been openly critical of the detention of Ms. Meng, so we have in general informed our personnel in Beijing and in our consulates … to take extra precautions,” one official said.
The Canadians have registered their concerns with the Chinese authorities, officials tell CNN.
“Part of our dialogue with the Chinese authorities has been around the notion that under international law it is actually the host country that is in charge of our security,” the official said. “We have made them aware of our concerns and they have stepped up security.”

However, the Chinese government says there’s no comparison between the Canadians held in Chinese custody and Meng’s arrest in Vancouver.
Comparing the detention of the Canadian men in Chinese custody to the arrest of the Huawei CFO, Hua said of the Canadians that, “no matter what ridiculous pretexts they come up with, covering up under the appearance of being legitimate, cannot cover up their ignorance for the real facts and their contempt for the rule of law and people around the world are ridiculing them for this.”
Source: Read Full Article