Save articles for later

Add articles to your saved list and come back to them any time.

Joe Biden may be the ultimate victor in a race for the presidency that has split America down the middle, but experts say the shadow of Donald Trump is likely to linger over the nation's outlook on the world for years to come.

With the bitter battle in its final throes, the Democrat has planted one foot in the White House by cutting a far different persona to the multilateralist senator who welcomed China into the World Trade Organisation in 2001. 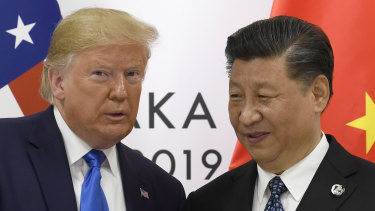 The US and China have had a difficult relationship during the Trump administration. Credit:AP

China's leader Xi Jinping once welcomed Biden to Beijing in 2013 as an "old friend", but such bonhomie now looks unlikely as bashing the US's prime economic rival was one of the few things the two candidates agreed on during the campaign.

Biden's manifesto instead stressed he would "stand up to the Chinese government's abuses". Perhaps almost as significantly, the man who originally supported both the North American Free Trade Agreement and the Trans-Pacific Partnership – both torn up by Trump – also pledged to "use taxpayer dollars to buy American and spark American innovation".

Such sentiments have prompted trade experts to question whether the likely ascension of the 77-year-old to the most powerful office will herald a renewed blossoming of international trade relations.

The trade war between China and the US since 2018 has resulted in import tariffs on goods from both nations jumping to 20 per cent. Bank ING estimates that China's exports to the US will have fallen 23 per cent or $US122 billion ($168 billion) compared to 2017 by the end of the year with trade flowing in the opposite direction down 24 per cent or $US45 billion.

The US is not going to go into a burst of trade liberalisation. They are not going to ease up that much on China. In fact, Biden may be better than Trump in organising a coalition against China.

Simon Evenett, professor of international trade at Switzerland's University of St. Gallen warns that Trump's stronger than expected performance at the polls – even despite his likely defeat – is "bad news for any enlightened trade policy, for the simple reason that a large number of people have endorsed his viewpoint".

He says: "First term Democratic presidents are rarely adventurous on trade. This will make Biden even more cautious of doing anything aggressive on the liberalising front. What you might get is an even tamer first term.

"There is a remarkable convergence at the political level and among the population in the US to a much more anti-trade, anti-China position. There has been a wholesale shift in thinking in Washington and scepticism about China, its promises and its trajectory.

"Biden's language will be less inflammatory but the hard-core identification of US commercial interests and the perception that China is a threat to them will not change."

The effect of the trade wars has been hugely magnified by a COVID-19 inspired trade slump that is expected to knock 10 per cent off global trading volumes in 2020, according to the International Monetary Fund's latest economic outlook. But the report noted that "the bulk of the distortionary tariff and non-tariff barriers" instituted around the world over the last two years remain in place. The latest figures from the Global Trade Alert database showed three times as many restrictions on trade put in place by countries so far this year compared to liberalising measures, at 1610 against 554. 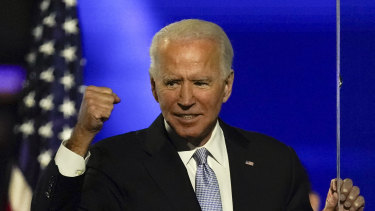 Experts aren’t expecting Joe Biden to ease up on China.Credit:AP

Despite the focus on tariffs, ING's international trade analyst Joanna Konings says subsidies – again exacerbated by COVID-19 – are also being used more commonly as governments look to give a leg-up to domestic companies. She says: "The issue of subsidies has been creeping up. A subsidy is also a trade barrier and we are trying to find our way into a world after coronavirus where firms are competing properly with each other again."

The idea of Biden the "Buy American" champion looking to overturn that in the short-term seems unlikely. Alan Winters, professor of economics at the University of Sussex, warned: "The US is not going to go into a burst of trade liberalisation. They are not going to ease up that much on China. In fact, Biden may be better than Trump in organising a coalition against China."

When finally confirmed in office, the Democrat will also be closely watched for his approach to the WTO. Trump plunged the body into further limbo in October by vetoing the Nigerian consensus candidate of the body's other 163 nations, Ngozi Okonjo-Iweala, in favour of the South Korean trade minister Yoo Myung-hee.

The organisation, which declined to comment, was due to ratify its choice during a virtual meeting on Tuesday but veterans of the body suggest the meeting could be adjourned to avoid a vote which could deepen the split with the US. That could mean months of limbo after the departure of previous chief Roberto Azevedo in the summer until the potential arrival of Biden in January. Stuart Harbinson, a former WTO official who served as senior adviser to Azevedo's predecessor as director-general, Pascal Lamy, said it was "quite difficult to see a way out of the jungle".

He added: "New administrations have thousands of things to sort out – political appointees like the US trade representative. I don't think the WTO will be very high on their list of priorities when it comes to tackling the most urgent issues. It could take a while for the shape of US trade policy to become clear, maybe even months."

Trump shut down its highest dispute resolution mechanism, the appellate body, by blocking the appointment of new judges last December. But the US's concerns with the WTO long pre-date the Republican, such as frustration over the lengthy decision making process of the appellate – a "court" which the US insists it does not recognise – as well as China's designation of itself as a "developing country" entitled to special treatment under WTO rules.

As president, Biden is unlikely to walk out altogether, according to Harbinson, but he will be keen to rein it in: "The US has complained of a creeping judicial activism and are saying they didn't sign up to that. A lot of members have sympathy with that. Biden might be thinking about developing constraints on the appellate body."

For the UK in particular, the chances of an immediate Brexit deal look less likely as Biden's team remember Boris Johnson's previous remarks about a "part Kenyan" president in Barack Obama, as well as the approving labelling of the PM as "Britain Trump" by the American original. The split Congress may also see the lapsing of the Trade Promotion Authority next July, the fast track route which allows an administration to get deals through both houses on a simple yes-no vote.

Whereas Trump would be "moderately well-disposed" towards a UK-US trade deal, Biden "will not be at all bothered", Winters adds. Even if Biden makes overtures towards the WTO, he could pursue a strategy of "picking people off one by one". "It is important to remember that the US has never liked international courts. If you go right back to 1947 and the signing of the General Agreement on Tariffs and Trade [a WTO forerunner], the US had a very bilateralist view of trade: you talked with someone and you bartered concessions with them. The multilateralism that the GATT started to evolve towards was not something that the US administration took to terribly comfortably. They went along with it because of geopolitics, really."

Biden's liberalisation is a case of back to the "old normal" according to Evenett: "Before the Second World War, the US was a nation that did not like foreign entanglements. After that they felt they had no choice and the rise of the Soviet Union solidified the outward engagement. Now what you've got is Americans turning around and saying, 'Maybe George Washington was right, maybe we should avoid foreign entanglements.'"

Hence hopes for a grand new era of international co-operation may be misplaced under Biden. He warns: "We're going to have to find ways to keep multilateralism alive without the US. The US isn't necessarily going to be blocking progress but it is not going to be an instigator. We are going to have to entice them in or work around them."

A concise wrap of the day on the markets, breaking business news and expert opinion delivered to your inbox each afternoon. Sign up for the Herald‘s here and The Age‘s here.