WTI oil prices took a breather last week to close at $73.80 per barrel after seeing blistering gains the week before as traders’ concerns about the strength of global demand growth came to the fore and supply worries eased slightly on the back of U.S. inventory gains and rising OPEC output. Platts reported that OPEC oil production rose by nearly 100,000 barrels per day (bpd) in June to 31.99 million bpd – despite falling production from Libya, Iran and Venezuela – thanks to Saudi Arabia increasing output by 380,000 bpd to an 18-month high.

According to data from Platts, Libya saw its output fall to 700,000 bpd in June, down from 955,000 bpd in May, and well below the 1.0 million bpd output achieved in February this year, as a militia called the Libyan National Army occupied and blockaded the country’s eastern crude export terminals. The oil market seems worried that Saudi, with spare production capacity of around 2.0 million bpd, might struggle to compensate for falling supply from so many other OPEC members simultaneously, putting a bid in oil prices.

Next week sees a host of oil market reports from the EIA, IEA and OPEC. First up on Tuesday is the Short-Term Energy Outlook from the EIA. In last month’s report, the EIA said that it expects OPEC crude oil production to average 32.0 million bpd in 2018 and increase slightly to an average of 32.1 million bpd in 2019. EIA stressed that the increase in production in 2019 is expected to occur despite falling production in Venezuela and Iran.

The EIA made its forecast before problems kicked off in Libya this month, so traders will likely focus on any changes to these expectations in the latest update. Previously, the EIA said that it assumes these decreases will offset increasing production from Persian Gulf producers, primarily Saudi Arabia. If the agency now thinks that Saudi is not entirely up to the task of neutralizing the falling output from Libya as well, this could propel oil prices higher.

[If you’re interested in finding the best broker for your trading needs, check out Investopedia’s  stock broker reviews and forex broker reviews.]

In the middle of the week, the oil market will get a glimpse of OPEC’s expectations and analysis of the oil market. In last month’s report, OPEC published a feature article outlining the group’s concerns about market developments in the second half of the year. Specifically, the cartel said that global economic activity has slowed in the first half of 2018, with growth below expectations in the major OECD economies.

OPEC currently sees demand for its crude averaging 32.1 million bpd in 2H18, down by 0.5 million bpd from 2H17 but in line with other forecasts from bodies like the EIA. The market will be looking for OPEC’s updated signals as to the direction of global demand for the rest of 2018 and into 2019.

The week is rounded out by the IEA’s oil market report. In last month’s report, the group provided its first estimates of 2019 oil demand in which it said that a solid economic background and an assumption of more stable prices are vital factors to global demand increasing by 1.4 million bpd in 2019. Risks to these assumptions include possibly higher prices and trade disruptions, with some governments considering measures to ease price pressures on consumers.

Market focus is likely to be on the supply side again, with concerns about the state of Libya’s output. Last month, the IEA said that, even if Saudi plugs the Iran and Venezuela supply gap, the market will be finely balanced in 2019 and vulnerable to oil prices rising higher in the event of further disruptions. Now that Libya appears to be adding to these further market disruptions, traders will be keen to see how this changes the IEA’s market narrative.

Oil’s technical picture remains favorable to market bulls. Prices found support this week above $73 per barrel, and the recent consolidation could be a pause to an additional upward price movement this week depending on market developments.

Technical indicators and moving averages are all green on the daily and weekly price chart. On the weekly chart specifically, oil has completed what traders call a three outside up bullish reversal pattern. This pattern is a reliable addition to the completed engulfing pattern. A bullish engulfing pattern occurs in the first two candles, with the third candlestick confirming the bullish trend.

The risk to the bullish narrative now is momentum, which may not currently be in oil’s favor. Prices have already fully recovered following a retracement to the 61.8% Fibonacci level of the bullish price run from early February to mid-May this year. Traders may be reluctant to push prices any higher in the absence of the next piece of market-critical news on the supply or demand front. The psychological price level of $75 per barrel may also be a factor working against an aggressive upward price move for oil this week. 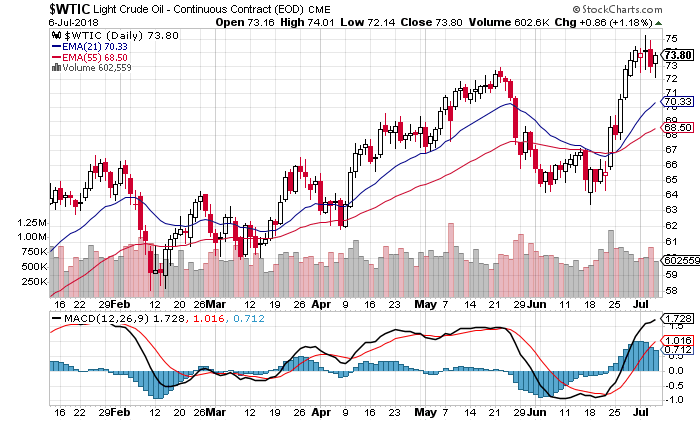 Disclaimer: Gary Ashton is an oil and gas financial consultant who writes for Investopedia. The observations he makes are his own and are not intended as investment or trading advice. Price chart courtesy of StockCharts.com.