Disney is on its best winning streak in five years, and some say the rally could continue

“Look at a weekly chart. You’re making what we define as a nice ascending triangle which is a continuation pattern and usually these kinds of patterns resolve themselves in the direction of the preceding trend,” Johnson explained on CNBC’s “Trading Nation” on Thursday. 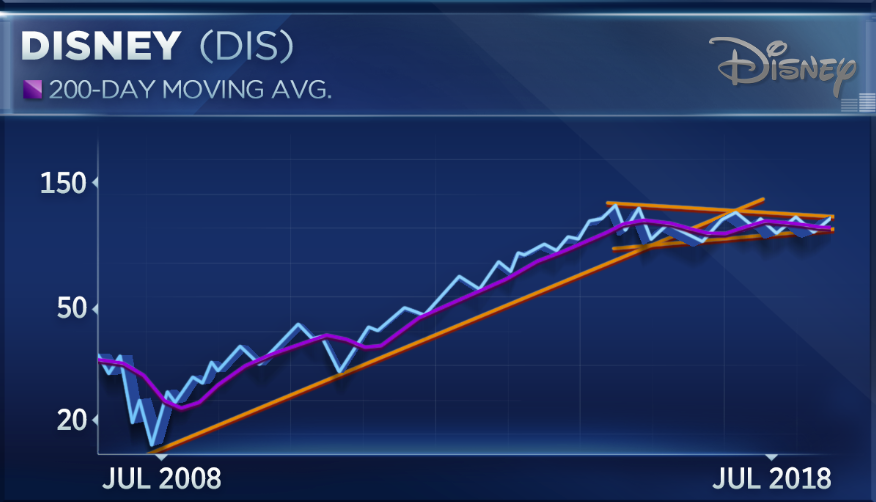 An ascending triangle pattern, a common bullish signal among technicians, is formed by linking two trend lines – the first measures a level of resistance and the second a series of higher lows.

“In Disney’s case I would expect the stock to continue to precede higher and I can actually see based on the size of the setup, I move into about $140, $145-ish type range. So still meaningful upside from these levels,” said Johnson.

A move up to $140 represents a massive 25 percent increase from current levels.

The options market is also suggesting a bullish bias among investors, according to Stacey Gilbert, market strategist at Susquehanna.

“We’re also seeing activity where investors are buying upside calls across Disney options and it’s not just one maturity. It’s several of them,” Gilbert said on Thursday’s “Trading Nation.” “The focus tends to be around that $120 strike.”

However, the expensive cost of options is above average, adds Gilbert, meaning there might still be some volatility expected in the stock.

“We look at spreading out the options given the volatility levels where they are,” suggests Gilbert. “So maybe buying one call and selling a higher call strike to get that upside exposure but reduce some of that volatility risk.”

Disney ended Thursday’s session with its ninth straight day of gains, a streak not seen since September 2013.

Not a Scientific Survey. Results may not total 100% due to rounding.