Former regulator met privately with KPMG while firm was under scrutiny

A former audit-industry regulator who advises one of the largest firms on audit quality was also one of two board members willing to meet privately in 2015 and 2016 with KPMG LLP, which was under significant scrutiny by the regulator because of chronically poor audit inspection results.

Former Public Company Accounting Oversight Board member Jay Hanson testified in March during the trial of David Middendorf, the former KPMG National Managing Partner of Audit Quality, that Jeanette Franzel, another board member, was his companion for pre-board meetings with KPMG beginning in 2015, while the firm was being heavily monitored for its high number of inspection discrepancies. 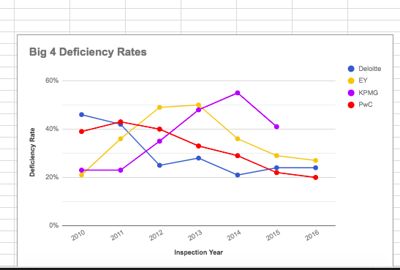 Middendorf was on trial with Jeffrey Wada, a former PCAOB inspector, for using audit inspection data stolen from the regulator by Wada.

Hanson, testifying in Middendorf’s defense, told the court that sometime after he started with the PCAOB board in 2011, he was approached by a member of leadership of another firm with a request to meet prior to the firm’s biannual scheduled meeting with his board colleagues to share his personal views on what he thought was “most important to get out of the meeting.”

After having several meetings like that with other firms, he made it known to all the firms that he was willing to talk with them before the meeting, via a phone call or personal meeting, and KPMG decided to take him up on that offer in 2015.

Hanson’s testimony about Franzel’s participation in meetings with KPMG was consistent with that of Middendorf and Thomas Whittle, the former KPMG national partner-in-charge for inspections, who said Hanson was accompanied to pre-board meetings with KPMG leadership by another PCAOB board member. He testified that it was general guidance at the regulator that for meetings between board members and audit firm leadership of any kind, it was advisable to have another board member or staff representative of the PCAOB accompany the board member.

Franzel said in a statement to MarketWatch, “My purpose in attending any pre-board meetings with firm personnel was to convey my personal views and concerns related to the state of audit quality and affirm their commitment to making improvements to audit quality.”

Franzel is one of three people appointed to a panel by EY in January, after a one-year cooling off period for “practicing” before the PCAOB expired. The objective of the EY panel is to get an outside perspective on aspects of its operations, culture or strategy that relate to audit quality. Franzel left the PCAOB in January 2018 shortly before the SEC and Justice Department filed civil and criminal charges against the former KPMG partners and ex-PCAOB professional for the regulatory data theft.

A spokesman for EY told MarketWatch, “We are delighted that Jeanette Franzel is a member of EY’s Independent Audit Quality Committee. Throughout her distinguished career in public service, and as a certified public accountant, Ms. Franzel has consistently demonstrated the highest levels of professionalism and integrity. Her insights and experience are of great value to EY as we deliver on our commitment to the highest quality in audits. EY and Ms. Franzel are aware of the ethical requirements resulting from her role as a former PCAOB Board member, and we are confident of her and our ongoing compliance with those obligations.”

The Securities and Exchange Commission fined KPMG $50 million in mid-June for using stolen PCAOB inspection information to cheat on audit inspections. Five former KPMG officials — Middendorf, Thomas Whittle, and David Britt, along with Brian Sweet and Cynthia Holder who came to KPMG from the PCAOB and one former PCAOB official, Wada — were charged last year in the case alleging they schemed to interfere with the PCAOB’s ability to detect audit quality violations at KPMG.

Whittle changed his plea from not guilty to guilty on all five counts last October and agreed to cooperate with the prosecutors. Whittle, Middendorf and Sweet are all now awaiting sentencing. Cynthia Holder also pleaded guilty and was sentenced to eight months in prison last Friday. Former KPMG banking partner David Britt is pending trial.

To read: Ex-partner at KPMG convicted in ‘steal the exam’ scheme

The SEC revealed a much larger scandal at KPMG when it fined the firm in June. KPMG auditors, including some senior partners in charge of public company audits, cheated on internal tests related to ethics, integrity and compliance training that had been mandated by a 2017 SEC enforcement action against the firm. In addition, for a period of time up to November 2015, some audit professionals, including one partner, manipulated the system for their exams to lower the scores required to pass.