Investors are deserting Europe, put off by its bizarre handling of the pandemic

European Commission President Ursula von der Leyen has invoked the nuclear option of the Lisbon Treaty. By threatening to activate emergency powers under Article 122 she has told the world that Europe is no longer a safe place for private capital or inward investment.

A regime that behaves like this is liable to impose capital controls without compunction, or block energy flows through the interconnectors, as has been threatened three times already (I keep count). And as we have seen, anything can be politicised, even random stochastic blood clots. Will global pharma ever build a plant again on EU territory after this episode? 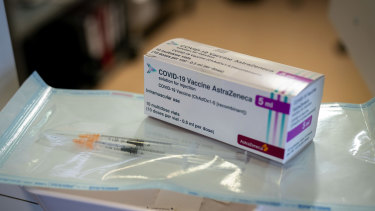 Coronavirus-ravaged countries such as Germany and France will resume their rollout of the AstraZeneca vaccine now, but the chaos in handling the pandemic is hurting investor confidence in the region.Credit:dpa

“We want to see reciprocity and proportionality in exports,” said Mrs Von der Leyen. Delicious. The EU is currently refusing to reciprocate temporary UK waivers to smooth post-Brexit trade flows or to reciprocate on bare-bond equivalence in financial services.

If these daily antics from Brussels and Berlin continue, the eye-wateringly large capital outflows from the eurozone that have already been occurring may accelerate into something closer to outright capital flight.

HSBC says outflows reached half a trillion euros in the fourth quarter, an annualised pace of 20 per cent of GDP. It quickened to €250 billion ($384 billion) in the single month of December.

The scale is breathtaking. It happened before the vaccine debacle condemned Europe to an extra quarter of economic recession and social despair.

“Relative to GDP, these outflows were the largest we have seen going back 20 years,” said Paul Mackel, the banks’ currency chief. Hedging contracts have prevented this setting off a disorderly slide in the euro, but that does not change the fundamental picture.

You can interpret these outflows in many ways but one thing they are not is a vote of confidence in eurozone growth and recovery, or indeed the political management of the EU. The exodus is likely to gather pace this quarter as American reflation and the vast funding needs of the Biden treasury suck capital out of the global system.

But the accelerant is what the German vice-chancellor calls the vaccine “sh– show”, made more destructive by the failure of every major EU state to heed the lesson from Britain and to let the B117 variant run rampant. The waning epidemic from the old variant and the rising epidemic from the new variant created an illusory stability in case numbers. Epidemiologists issued warnings. Politicians again refused to listen.

French President Emmanuel Macron is close to admitting that his political gamble has failed and that greater Paris will have to be shut down within days. He took a “Jupiterian” decision to keep France open, overruling his scientists, his health minister and his premier. He now owns a disaster. What baffles me is that an astute technocrat – au fait with numbers, curves and lag effects – could misread the data so badly.

The consequences of a mushrooming third wave in an unvaccinated population, with no herd immunity until September, is to protract what Keynes called the “long dragging conditions of semi-slump” for many more months, inflicting such damage that the recovery may be sickly even when it finally comes.

While the US is spending $US2.8 trillion ($3.6 trillion) or 13 per cent of GDP in fast fiscal relief – two thirds this year – the EU has nothing of the kind. The Recovery Fund is for rebuilding later. “It is a medium-term investment plan. It doesn’t do much in the short term,” said Lorenzo Codogno from LC Macro Advisors.

The Recovery Fund will in theory dish out €87 billion later this year in grants and loans (less relevant) if recipients meet all conditions. That is just 0.7 per cent of GDP. It is why the European Central Bank’s Isabel Schnabel has warned that the fund may be “insufficient”, opening a political Pandora’s box.

There is fiscal stimulus worth 2 per cent of GDP at a national level but the Atlantic gap is huge. Washington is “going big” even though the US output gap will be closed by June, so big that the OECD now thinks America will regain its pre-pandemic trajectory by next year – along with China in this elite club.

Yet Europe is “going small” even though the output gap in the eurozone is still a dire 8 per cent of GDP, reaching 10 per cent in Italy and Spain (IIF data). It is Atlantic decoupling like never before in modern times.

If these daily antics from Brussels and Berlin continue, the eye-wateringly large capital outflows from the eurozone that have already been occurring may accelerate into something closer to outright capital flight.

The story that has yet to gain media traction is cross-Channel decoupling. It is no longer implausible to imagine Britain leaving Europe far behind over the course of 2021, a remarkable thought given the counter-story in the British lay press is that post-Brexit trade has been a calamity.

Markets have shrugged off the 41 per cent collapse in exports to the EU in January, deeming it transient noise. One cannot infer much from trade flows that month – except that firms were not ready, and the EU aims to be bloody minded. Companies had stockpiled before and were holding back afterwards in case of border chaos. Only if these patterns continue into March will there be serious grounds for alarm.

For now sterling is in rude good health. The pound has hit a one-year high of €1.17 against the euro this week and is nearing the top end of its post-referendum trading range. Bank of America says the pound is undergoing a “cyclical rehabilitation”. Fears that inward investment would dry up have proved unfounded. “There are clear signs of pick-up in flows into UK Plc,” it said.

There has been steady buying of sterling during New York opening hours by US funds. Japan’s giant life insurers and pension funds are scooping up gilts. RBC Capital says they purchased a net $US5.5 billion of UK bonds in January alone, the highest in five years.

BNY Mellon, the world’s top custodian bank with $US25 trillion under watch, says its iFlow data is detecting a marked shift into UK assets by global fund managers. “It is not just a one-off story after the Brexit deal. It has been going on since last year. Funds are rotating back into UK equities,” said Geoffrey Yu, the bank’s Europe strategist.

The UK will reopen and return to growth months before the eurozone. The measurement distortion that overstated the UK’s economic contraction by roughly 2 per cent of GDP last year will flatter growth this year with a mirror-image distortion on the way back up.

All the stars are aligning for what the Bank of England’s Andy Haldane calls a “coiled spring” recovery. That does not in itself validate Brexit, but the spectacle of cross-Channel decoupling will profoundly change the global discourse on Brexit.

The real test comes later during the hard grind of the 2020s. But my hunch is that the first year of independence will be much better than almost anybody expected.