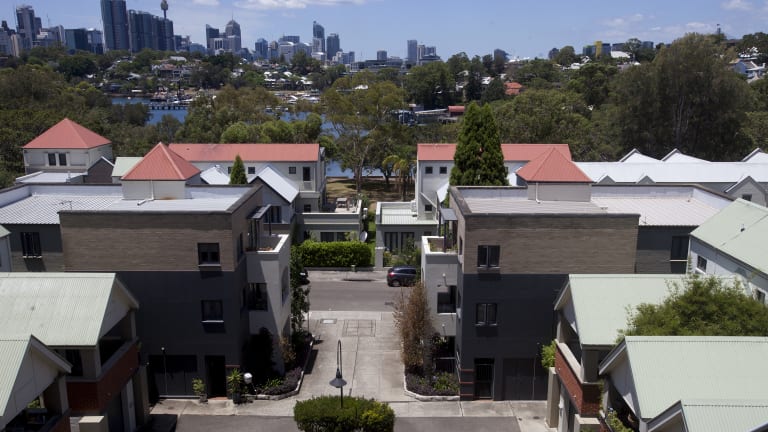 House prices are coming down.

In case there was not enough to worry about, the Reserve Bank of Australia this week issued a report on the worrying level of household debt. In the past three decades, debt has risen faster relative to income in Australia than almost any other country.

The risk to the economy from rising household debt has long been understood but the surprise twist in the past year is that the price of houses, the assets which back up the majority of that debt, are now falling. Only about half the houses offered for auction each weekend are selling and property developers are struggling to sell new apartments. That has changed the maths on debt.

Last year when house prices were rising at 10 per cent a year, piling on ever more debt to buy a house or investment property seemed like a no-brainer. Now, that one-way bet is not such a sure thing and some people, especially investors, who bought at the peak, could find themselves "under water" if they try to sell out.

The environment stirs up memories of the US housing bubble that led to the global financial crisis a decade ago. Banks lent too much without checking their customers' ability to pay back the loans. When house prices started to fall, the speculators and deadbeat borrowers who were overstretched defaulted and the wave of bad debts brought down big US banks and sent shock waves around the world.

That is the doomsday scenario but there is no reason to press the panic button yet. The obvious good news about the fall in house prices over the past year is that it has made houses cheaper for many to buy. Of course wages are not booming but they are rising faster than house prices. As the ratio of income to price shifts, more first home buyers, who have been excluded for years, are now finding they can think about entering the market. Many people are still priced out, especially if they cannot access what has been called "the bank of mum and dad" but the millennials are for the moment gaining back some ground on the baby boomers.

Clearly the irrational exuberance that pushed up house prices had to end, and the past year is part of a natural correction. Equally it could also be evidence that some deliberate government policies designed to slow the riskiest forms of borrowing are working. If the regulators can slow down soaring house prices without driving them into a dangerous air stall, that will be an important achievement.

In the wake of the evidence at the banking royal commission of mortgage salesmen writing reckless loans to increase their own commissions, lenders are now under more pressure to check that borrowers can handle repayments.

Many property investors have been driven from the market by tough new rules which are designed to favour owner occupiers. Investors are considered higher risk because they are more likely to sell out quickly in a crisis and destabilise the market. Many of the foreign buyers, who dominated auctions only a year ago, are now staying away because of the higher taxes and tighter foreign investment rules brought in over the past few years.

If the ALP wins and cuts the generous tax concessions for capital gains and negative gearing it could also help remove some of the distortions in the market.

No one should be surprised then that house prices are falling but for now the RBA seems to be happy that the market is not about to collapse. Relatively strong population growth will keep a floor under house prices in Sydney and Melbourne and the good news this week is that more people are in jobs.

The RBA also points out that house prices are falling faster at the top of the market. That is reassuring because rich people typically are better able to handle volatility and ride out a short-term trough.

Yet there are risks because we have as a nation become so obsessed with housing as a magic store of wealth. When prices are rising, home owners feel rich. As prices fall, home owners feel the weight of their mortgages hang ever heavier around their necks. They could respond by spending less to find either forms of saving which can hurt economic growth.

Australians will have to learn that bidding up the price of each other's houses is not a long-term formula for wealth. Data this week showed that the average superannuation funds returned around 9 per cent to investors last year, putting housing in the shade. This could be a turning point in both the economy and our culture as the reality dawns that excessive housing debt is not a guaranteed way to make money.