Price pressures: Cost of living worries in Sydney at an 11-year high

Cost of living pressures have shot to the top of Sydneysiders’ worry list following sharp price rises for a raft of household necessities, surpassing concerns about healthcare, housing affordability and the environment.

Sydney’s consumer price index shows prices rose in 73 of the 87 expenditure classes monitored by the Australian Bureau of Statistics during the first three months of this year. 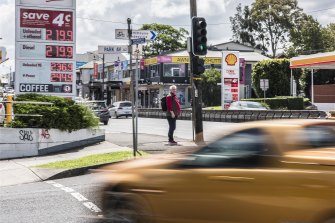 Cost of living has emerged as the biggest concern for people in NSW in the March quarter.Credit:Steven Siewert

Easily the biggest increase was for automotive fuel which rose 9.6 per cent in the March quarter and 33 per cent over the year – the biggest annual increase for that category in Sydney for more than 30 years.

Prices for a tranche of food and groceries items in the city also jumped, including vegetables (up 14.1 per cent over the year), beef and veal (up 12.4 per cent), oils and fats (up 9.3 per cent) and cleaning and maintenance products (up 4.9 per cent).

The expenditure classes – groups of similar goods or services, such as pharmaceuticals, restaurant meals or grocery items – are used to calculate the rate of inflation.

Cost of living emerged as the biggest concern for people in NSW in the March quarter, the Ipsos Issues Monitor shows.

The survey, which asks a representative sample of adults to select the top three issues facing the state, found 43 per cent ranked cost of living among their biggest concerns, the highest share in the 11-year history of the survey. Petrol prices (22 per cent) ranked among the top five worries in NSW along with healthcare (40 per cent), housing (39 per cent) and the economy (26 per cent). The environment, which was the nation’s No. 1 concern following the black summer bush fires in early 2020, now ranks seventh in NSW (16 per cent).

Soaring inflation and rising interest rates have ensured cost of living has dominated debate in the federal election campaign now in its final fortnight.

Sydney’s consumer price index rose 4.4 per cent in the year to March, the biggest annual increase in 13 years. But not everything became more expensive.

The price of electricity fell 4.9 per cent in the same period while prices for garments for women were down 3.4 per cent. Rent prices in Sydney fell 1.2 per cent over the year despite a 0.2 per cent increase in the March quarter.

Sydney had the lowest CPI growth among the capital cities in the year to March – inflation was highest in Perth (up 7.6 per cent for the year) and Brisbane (up 6 per cent).

AMP chief economist Shane Oliver said rents were one reason Sydney’s CPI has not risen by as much as other cities.

“Rental price growth has been weaker in Sydney and Melbourne than in other states,” he said.

The economic disruption caused the Delta and Omicron outbreaks, which was more acute in NSW and Victoria than other states, may also have helped keep inflation pressures more muted in Sydney and Melbourne than other capitals.

Differences in spending patterns mean some household types are experiencing more pronounced cost of living pressures than others.

The increase in living costs for age pensioner households in the year to March was 4.9 per cent while for households reliant on paid employment the increase was only 3.8 per cent.

The Morning Edition newsletter is our guide to the day’s most important and interesting stories, analysis and insights. Sign up here.