Revealed: why the government’s forecasts are always way off

Just to warm you up for the mid-year budget update on Monday, let me ask you: why do you think Treasury and the Reserve Bank have gone for a least the past eight years forecasting more growth in the economy than ever transpired?

Kieran Davies, a respected economist from National Australia Bank, has been checking. He says their mistake has been failing to allow for the decline in our “potential” growth rate since the global financial crisis in 2008.

Actually, Davies has checked only the Reserve’s forecasting record, not Treasury’s. But the two outfits use similar forecasting methods and use a Join Economic Forecasting Group to ensure their forecasts are never very different. 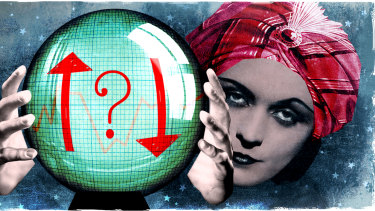 Treasury and the Reserve Bank have forecast more growth in the past eight years than has transpired.Credit:Dionne Gain

Sometimes (as now) the economy’s annual demand for goods and services doesn’t grow as fast as its potential to supply those goods and services is growing. This creates an “output gap” of idle production capacity, including unemployed and under-employed workers.

When demand picks up, the economy can grow faster than its potential growth rate for a few years until the idle capacity is fully taken up and the output gap has disappeared. Once that’s happened, the potential growth rate sets the speed limit for how fast the economy can grow. If demand’s allowed to grow faster than supply, all you get is inflation.

We know from the fine print in the budget papers that Treasury’s estimate of our present potential growth rate is 2.75 per cent a year. You can be sure the Reserve’s estimate is the same. This is often referred to as the economy’s forward-looking “trend” (medium-term average) rate of growth.

Treasury’s projections of growth over the rest of the next 10 years are based on the assumption that, once the economy has returned to its trend rate of 2.75 per cent, it will then grow by 3 per cent a year for several years until the idle capacity is used up, when it will revert to 2.75 per cent. (This projection of perfection is what allows the budget papers to include an incredible graph showing the budget surplus going on forever and the government’s net public debt plunging to zero by June 2030.)

Now, here’s the trick. Because the Treasury and Reserve forecasters have no more knowledge of what the future holds than you or I do, they rely heavily on a long-established statistical regularity called “reversion to the mean”. That is, if at present the variable you’re forecasting is above its average performance, the greatest likelihood is that it will move down towards the average. If it’s below average, it’s likely to move up towards the average.

So now you know why, for at least the past eight years, Treasury has forecast that, though growth in the economy is weak at present, within a year or two it will return to trend, and then go higher. When it turns out that didn’t come to pass this time, it’s still the best bet for next year. Fail and repeat. Although the Reserve revises its forecasts every quarter, it follows the same method.

In other words, when your forecasting method relies so heavily on reversion to the mean, if your estimate of potential growth is too high, it’s hardly surprising you’ll forecast more growth than you ever get.

But what’s wrong with the econocrats’ estimate of the potential growth? It could be in one or more of their estimates of growth in its three P components, but Davies’ checking shows it’s not population or participation, but productivity.

Davies says the MARTIN model shows that trend growth in productivity has slowed from 2 per cent a year in 2000, to 1.3 per cent in 2010 and to 1.1 per cent in 2019. This slowdown is not peculiar to Australia, but has occurred across the advanced economies.

Taking the median rate for those other economies, he estimates that the annual improvement in their productivity of labour per hour worked has slowed from 1.9 per cent in the 10 years before the crisis, to 0.8 per cent in the years since the crisis.

Davies’ equivalent estimates for us are similar: from 2.1 per cent to 1.2 per cent.

Okay, so why has productivity fallen? Labour productivity has two components: “capital deepening”, where investment in more capital equipment per worker makes workers more productive, and “multi-factor productivity”, which is the improvement that can’t be explained by anything but technological progress (not more equipment so much as better equipment, plus improvements in the way factories and offices are organised) and reforms to the structure of the economy (“micro-economic reform”).

Davies finds the overall decline is mainly explained by the weakest rate of improvement in multi-factor productivity in decades – that is, little technological progress, here or overseas – but also by investment in the stock of non-mining physical capital that’s only just keeping up with the growth in the supply of labour (which, I imagine, hasn’t been helped by our need for “capital widening” to provide equipment to all the extra migrant workers).

What Davies’ digging has really exposed, of course, is the econocrats’ refusal to accept that our economy’s caught in former Bank of England governor Mervyn King’s “low-growth trap”.