Suez Canal ship may be freed by Saturday

Can the US Navy help on the Suez canal? Gen. Keane explains

SUEZ, Egypt—Efforts to free a ship wedged into the bank of the Suez Canal, blocking traffic through the critical waterway, progressed significantly late Friday, people familiar with the operations said, raising hope among authorities that the ship could be dislodged as early as Saturday, and the canal cleared for the resumption of traffic soon after.

The late-night optimism came after a day in which the ship’s operator said it may take two to three more days to dig out the ship’s bow from the sandy and muddy bank that it crashed into earlier in the week. Dredgers worked late Friday under floodlights to remove hundreds of thousands of cubic feet of sand around the bow of the 1,300-foot Ever Given, operated by Taiwan-based Evergreen Group. An attempt to refloat the vessel earlier Friday wasn’t successful, according to the ship management firm for the vessel.

Fresh efforts at digging out the ship are “going well,” a person involved in the operation said. “We may get it moving earlier than originally thought.”

In a statement earlier Friday, Evergreen said a salvage team was continuing to clear sand and mud around the ship’s bow in order to try to free the vessel during high tide. It said it would take “at least two to three days to reach the required depth for the stranded ship to refloat.”

Earlier in the day, Yukito Higaki, president of Imabari Shipbuilding Co., whose group of companies includes the ship's owner, Shoei Kisen Kaisha Co., said at a news conference in Japan that workers had hoped to dislodge the ship by Saturday. More diggers are being brought in and salvage teams are making plans to siphon out fuel and ballast water to lighten the ship, according to one person involved in the operation. 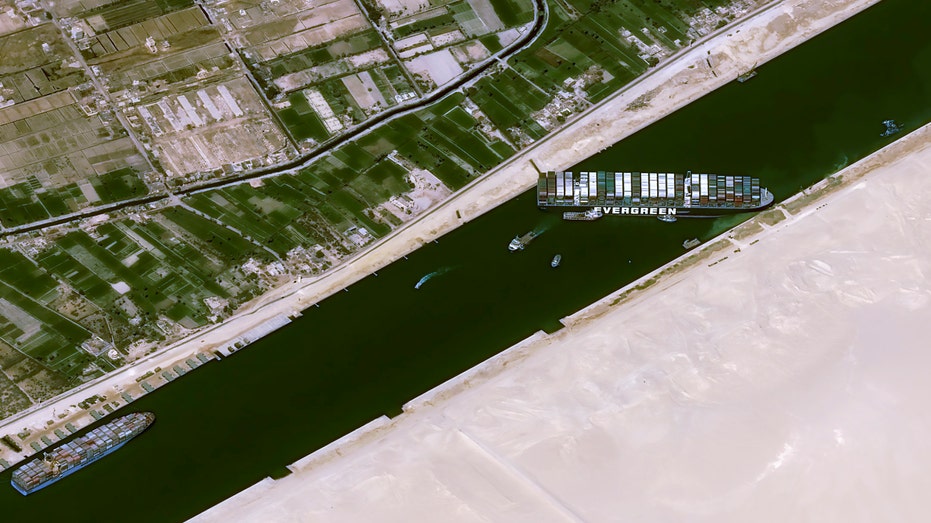 The cargo ship MV Ever Given stuck in the Suez Canal near Suez, Egypt, Thursday, March 25, 2021. The skyscraper-sized cargo ship wedged across Egypt’s Suez Canal further imperiled global shipping Thursday as at least 150 other vessels needing to pass

"It's a difficult process. The ship's bow is still wedged in the canal wall and there could be some structural damage," this person said. "If you try to yank it out, things could get worse and fuel could spill out. It's the worst place in the canal for such a big ship to be stuck."

The U.S. said it had offered unspecified assistance to clear the waterway, which connects the Mediterranean and Red Seas and is a choke point for as much as 13% of global maritime trade and 10% of seaborne oil shipments. While most of the immediate impact of the shutdown will hit European and Asian companies that use the route, the closure threatens knock-on delays and costs to U.S. importers and exporters, already struggling with port delays on the U.S. West Coast.

White House press secretary Jen Psaki said the Biden administration sees "some potential impacts on energy markets" due to the vessel blocking the Suez Canal. She said the White House was in close consultation with Egyptian officials, and the U.S. had offered its assistance. The waterway is also strategic for Washington — frequently used by U.S. and allied warships moving between Europe, the Mideast and Asia.

Meanwhile, the logjam of vessels waiting at both ends of the Suez Canal on Friday grew to 237, up from 156 the previous day, according to Leth Agencies, a shipping services provider. For days, as Egyptian authorities tried to clear the canal, shipowners and operators debated whether to reroute ships around the southern tip of Africa — potentially adding weeks and tens of thousands of dollars to the cost of voyages — or to wait for the canal to free up again.

SUEZ CANAL MAY JEOPARDIZE YOUR MORNING CUP OF JOE

Many shipowners have now decided to reroute. Early Friday, the Ever Greet, a sister ship to the Ever Given, was rerouted away from Suez and toward Africa's Cape of Good Hope, according to MarineTraffic, a shipping tracker. The vessel was sailing from Malaysia to Rotterdam.

"It was supposed to go through Suez…it's going [via] Cape Town now," said a manager at the Ever Greet's owner, Nissen Kaiun KK.

Two other container vessels, one headed from Rotterdam and another from the U.K., abruptly changed course from their earlier planned tracks through the Mediterranean, according to MarineTraffic. With no end in sight to the blockage, "we will see increasingly more operators take similar steps," a spokeswoman for Greek shipper Capital Ship Management Corp., owner of the Hyundai Prestige, one of the diverted container ships. A crude tanker and several giant tankers carrying liquefied natural gas have all changed course and are now heading to the Cape of Good Hope, according to ship trackers.

Shipping giant A.P. Moeller-Maersk A/S said 22 of its ships have been affected by the blocked canal, including two that it has now rerouted to the Cape of Good Hope. 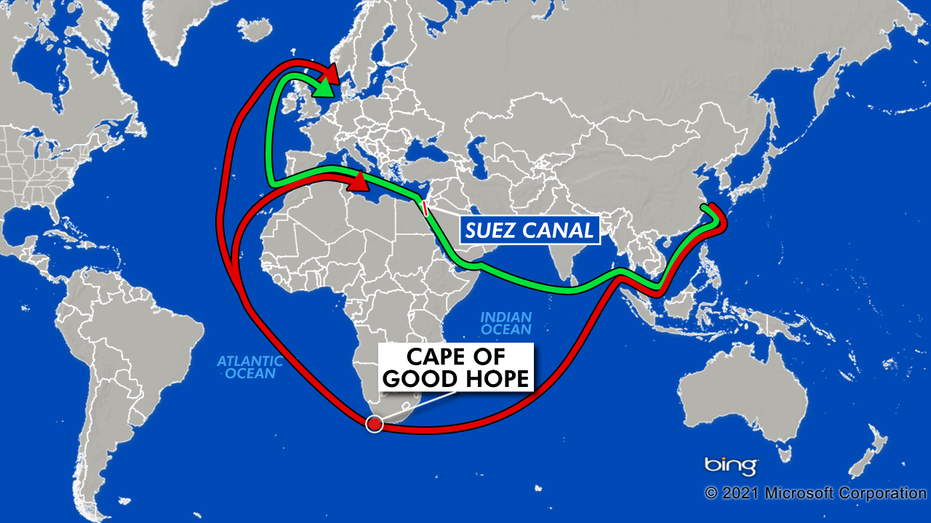 Most vessels that were already close to the canal are now crowding the waterway's two entrances. So far, most of these ships are holding tight. Analysts said the longer sailings will further scramble the world's carefully choreographed ballet of container-based shipping.

Beyond the effect on European and Asian businesses, importers in the U.S. could also feel an impact. Demand for containers and berthing space soared late last year and into this year, well before the Suez crisis.

Backups in container ports, especially along the West Coast of the U.S., have grown during a normally slack period in shipping demand. That has tied up inventories for weeks in some cases, as ships wait to reach berths while unloaded containers sit for long periods at packed freight terminals

.The Suez blockage "will drastically reduce global container shipping capacity and lead to further delays for American importers to get their orders delivered," said Lars Jensen, chief executive of Copenhagen-based SeaIntelligence Consulting. "This couldn't have come at a worse time because all ships available have already been deployed."

While customers around the world can expect delays, European ports are also girding for congestions once rerouted ships eventually get into port. Gateways like Antwerp and Rotterdam could see waiting times lengthen significantly, analysts said.

"The longer it takes to re-float the vessel, the greater the risk that we'll see serious bottlenecks in ports in Northern Europe, and the bigger the hurdle to clean up," Maersk told its clients.
The canal closure has alarmed companies that don't use the waterway. Russian steelmaker PAO Severstal gets the coal and iron ore it uses to make its metal from local sources, and the company doesn't send its finished product through the canal.
"But obviously, freight costs went up everywhere, and we need to calculate how that will affect us," said Alexey Kulichenko, the company's chief financial officer.