The day-trading frenzy that took over the investing world in the past week has dealt a slight blow to the trustworthiness of the stock market, but has yet to deter investors from staying the course, and in some cases, taking on some risk. Those are the findings of a recent survey of Investopedia’s daily newsletter readers from the end of Jan. 2021.

Our readers, like most active investors, were highly aware of the wild intraday price movements of highly shorted stocks, including GameStop (GME), AMC Entertainment (AMC), Tootsie Roll Industries (TR), and others.

In fact, 25% of those who responded to the survey purchased shares of one or more of last week’s high-flyers in the hopes of making some money, or “tendies,” on a quick trade.

Still, the ferocity of the backlash between day traders, hedge funds, and online trading platforms like Robinhood has eroded the trust of some investors. 42% percent say they trust the stock market less than they did six months ago.

Their loss of trust in the stock market has been coupled with their disappointment with online trading platforms that restricted traders’ abilities to purchase additional shares of some of those widely traded stocks in the past two weeks. Robinhood received most of the negative attention over the past several days as members of the WallStreetBets forum on Reddit and traders on other social media platforms blasted the company and its CEO for restricting their trading ability.

Sixty-two percent of our readers agreed that online brokers should not be allowed to restrict trading during periods of volatility, while less than 25% say they should. 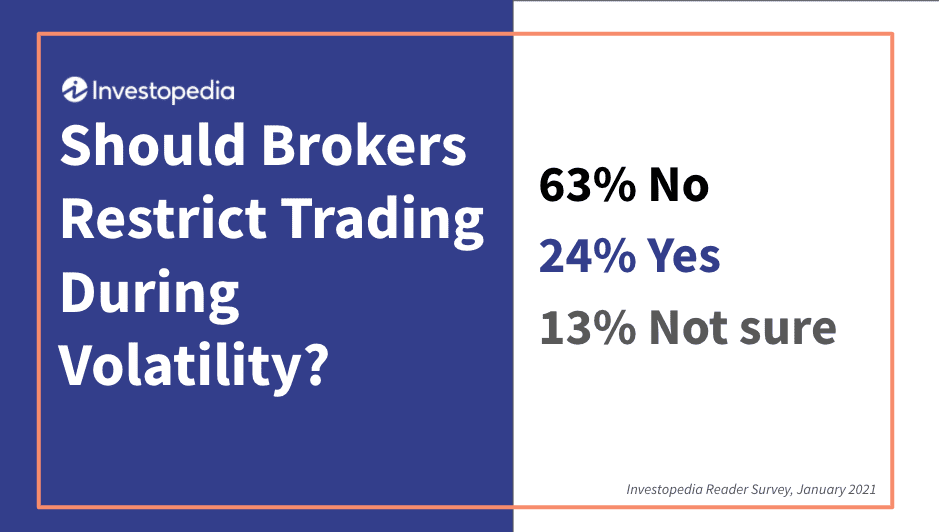 Even though their trust might be shaken, their bullishness is not. While tempered from past surveys, Investopedia’s readers remain mostly bullish on the future of the stock market’s returns and don’t plan to make major portfolio adjustments, according to survey responses. 41% say they’re “a little worried” and 27% say they’re “not worried at all.”

They’re Not Afraid to Get Messy

One quarter of respondents admitted to trying their luck with some of the most volatile stocks of the past week. AMC Entertainment was the top choice with 11% of respondents, followed by GameStop and Nokia.

Notably, this rivals the percentage of respondents who regularly report buying favorites like Apple (AAPL), Microsoft (MSFT), and Tesla (TSLA), suggesting the buying frenzy in late January made a considerable impact on trading behavior.

No word from our readers yet on whether they got out of those trades with a profit, or “tendies” as the traders like to call them these days.