There’s a growing sense of panic in China

There’s a whiff of panic in the air in China as its policymakers respond to the sharp economic downturn generated by the country’s zero tolerance approach to the outbreak of the Omicron variant of COVID-19.

On Monday, after a meeting of China’s State Council, they announced more tax rebates, a moratorium on companies’ social security payments, deferrals of loan repayments, new infrastructure spending and cuts to taxes on vehicle purchases. 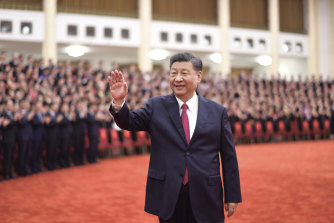 Don’t expect Xi Jinping to admit the COVID policy was a mistake, despite the social misery and economic damage it is causing.Credit:AP

The People’s Bank of China also announced an effective cut to the interest rates for first home buyers, reducing the rate they will pay from 4.6 per cent to 4.4 per cent, after a collapse in home sales this year. Last month home sales were down 46.6 per cent from a year ago.

The authorities had already been cutting interest rates and taxes and increasing infrastructure spending in response to an economic slowdown that, apart from the economic slump at the onset of the pandemic in 2020, is the worst the country has experienced in decades.

The rigid “zero-COVID” approach China has taken to the outbreaks of Omicron – and to which Xi Jinping is committed – is taking a heavy toll on economic activity.

Last week China released economic data that showed industrial production, the engine room of China’s economy, had fallen 2.9 per cent. Retail sales slumped 11.1 per cent, car sales halved and the urban unemployment rate (which excludes migrant workers) rose from 5.8 per cent in March to 6.1 per cent in April, just under the 6.2 per cent peak experienced in March 2020. Unemployment among urban 16 to 24 year-olds is at a record level of more than 18 per cent.

It is the severe lockdowns, particularly of major cities and ports like Shanghai, that are proving destructive, damaging factory activity, logistics and trade as well as – as the retail sales numbers underscore – domestic consumption.

Soaring prices for energy and agricultural products as a result of Russia’s invasion of Ukraine add another layer to the threats to China’s growth, as does the unresolved crisis in a property sector that has been the key driver of China’s growth.

Amid the plunge in home sales, and despite the interest rate cuts and central and local government efforts to ease restrictions and stimulate activity, the development sector remains distressed. Last week China’s third-largest developer, Sunac, missed a payment on a $US742 million ($1 billion) offshore bond.

The government’s targeted economic growth rate of 5.5 per cent for this year – the lowest in 30 years – is under threat absent a hockey-stick like turnaround in the second half of the year. The International Monetary Fund has already reduced its forecast for China’s GDP growth to 4.4 per cent and there are private sector forecasts of less than 4 per cent. There are also forecasts that the economy will shrink in the June quarter.

The extent of the downturn in China has implications for the global economy, given the size of its economy and its significance as a key driver of global growth in recent decades. 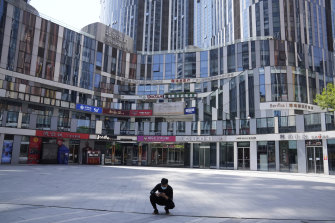 Officials continue to downplay the severity of the imapct of the lockdowns, despite scenes of empty streets in some of China’s biggest cities.Credit:AP

China’s role as the world’s largest manufacturing hub means the turmoil in its domestic logistics, including the disruptions to key ports, is adding to the supply chain woes that are a major factor in outbreaks of inflation in major economies at levels not seen for decades.

There is a very real risk of central bank-induced recessions in the US, Europe (which also has to deal with an energy crisis caused by the war in Ukraine) and elsewhere. China’s economic woes add to that risk.

Inflation rates at high single-digit levels in the US and Europe have triggered (or in Europe’s case will shortly trigger) increases in interest rates that will in turn adversely impact China and restrict to some degree its ability to respond to its domestic challenges.

Even if the authorities threw the policy kitchen sink at it, as long as the zero-COVID approach remains in place the economy is likely to remain challenged and economic conditions volatile and very dependent on the course of the pandemic.

The yuan has depreciated about 4.5 per cent against the US dollar in just over a month as capital is flowing out of China towards the increased rates now on offer in the US.

The Chinese authorities are very aware that lowering their own rates too aggressively to try to stimulate activity could turn what’s already a steady outflow of capital into a fully-fledged and destabilising capital flight.

There is little prospect of China relenting on its harsh approach to COVID, indeed the rolling out of thousands of permanent PCR testing kiosks suggests it is preparing to maintain the approach longer term. Citizens are unable to work, shop or move around unless they have a current negative test result.

The Communist Party’s five-yearly 20th National Congress is looming later this year, at which Xi expects to see his tenure as leader extended into an historic third term. Xi isn’t going to admit to a policy mistake of such proportions, despite the social misery and economic damage it is causing.

The authorities are, in fact, denying any material social impacts from the policy and downplaying the severity of the lockdowns, despite the pictures of completely empty streets in some of China’s biggest cities, including Beijing and Shanghai. 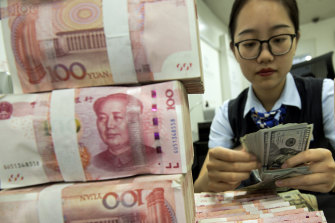 The yuan has fallen sharply against the US dollar as investors take their money out of China.Credit:AP

China isn’t going to be able to kickstart growth unless it can generate more domestic activity and, in particular, ignite consumption and property market activity. Some Chinese economists have been calling for straight cash handouts to households to and there is an expectation that there will be more fiscal and monetary stimulus as this year progresses and the national congress draws nearer.

China’s usual response to economic challenges is to boost infrastructure spending and it is unlikely that this time will be any different (which ought to underpin demand for Australian resources) even if it does little to address the structural issues confronting the economy.

The kind of massive and broad stimulus China unleashed in response to the outbreak of the pandemic in early 2020 and the 2008 financial crisis is unlikely because of the probable impact it would have on the yuan, capital flows and inflation.

Even if the authorities threw the policy kitchen sink at it, however, as long as the zero-COVID approach remains in place the economy is likely to remain challenged and economic conditions volatile and very dependent on the course of the pandemic.

That’s not an encouraging outlook for China, or the rest of the world.