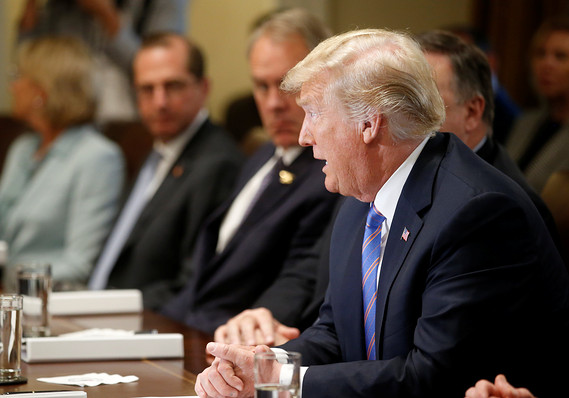 In public comments and over Twitter, President Donald Trump on Wednesday maintained that his Russian counterpart was upset over his administration’s policy and said Russia is no longer targeting the U.S.

TRUMP: NO PRESIDENT HAS BEEN AS TOUGH ON RUSSIA

Trump’s comments came as he is still feeling the heat from his joint press conference with Russian President Vladimir Putin, which drew criticism from across the political spectrum as well as the media. On Tuesday, Trump declared that he was supporting the findings of U.S. intelligence that Russia interfered in the U.S. 2016 election and said he misspoke in Helsinki.

After the cabinet meeting on Wednesday, Trump briefly spoke to the media. “We are doing very well, probably as well as anyone has ever done with Russia,” he said. “No president ever has been tough as I have been on Russia.”

On Tuesday, the White House enumerated that assertion — citing Trump’s signing of an executive order to review cybersecurity, increased coordination between the Department of Homeland Security and state and local governments relating to election security and integrity, the expulsion of Russian intelligence officers and diplomats, the ban on the use of Kaspersky Labs software on U.S. government computers, and new sanctions.

When Trump signed the new sanctions, he issued an unusual “signing statement,” saying it encroaches on the executive branch’s authority to negotiate.

Asked if Russia is still targeting the U.S., Trump shook his head and said, “No.”

Over Twitter, Trump made the case that his critics want the U.S. to go to war with the nuclear power, and that there’s potential for cooperation on North Korea and other matters.

Trump also tweeted out jobs growth numbers. His daughter and senior adviser, Ivanka, told the cabinet that the president will sign an executive order to expand vocational education.