It was enough to have investors choking over a breakfast of oat-based milk and organic, fairtrade muesli. Oatly, the Swedish company that has pioneered the market in milk that has never been anywhere near a cow, reported earlier this week that supply and distribution snaffles had hammered sales, sending the once high-flying shares crashing. Only a few days earlier, Beyond Meat, the American superstar of the alternative protein industry, also reported supply issues, and the shares tanked.

A coincidence? Not exactly. Sure, there are always problems at any business, and that is especially true of fast-growing companies pioneering a new technology. And yet, while there is plenty of demand for meat and dairy products produced without any help from animals, there are also huge challenges. The production system needs a lot of work. The corporate giants have moved into the market aggressively. And food is an industry with wafer-thin margins, kept afloat by subsidies and quotas. Investors have bet big on the sector, assuming food was the next sector ripe for disruption. But those bets are about to turn as sour as a six-month-old carton of non-plant-based milk. The bubble is going to burst. 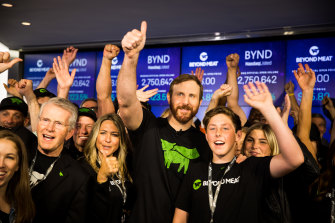 After an impressive debut, Beyond Meat shares have run into trouble. Credit:Bloomberg

Rewind a few months and Oatly was one of the hottest stocks in Europe. When the Swedish company floated on Nasdaq in May, it was valued at $US10 billion. The shares rose almost 50 per cent on the first day of trading, making it one of the stars of the alternative protein sector. Beyond Meat was an even more spectacular success. When it listed in May 2019, its shares almost tripled in value within a few days, making it the most successful IPO since the peak of the dot com bubble. Everyone wanted a slice of the company. An estimated $US3 billion of venture capital money was put into plant-based alternative proteins last year, triple the level in 2019, as everyone wanted to find firms that would emerge as the Apple or the Tesla of the new industry.

And yet it too has now run into trouble. Earlier this month, third-quarter results disappointed the market, with the shares sliding by 17 per cent in a single session, as it missed sales forecasts, reported steeper losses, and warned that higher than expected transport and warehousing costs would create even more red ink.

More seriously, Wall Street analysts started to question whether the market had already reached saturation. The shares are down by 37 per cent so far this year, and don’t show much sign of recovering any time soon.

Here is the difficult question, however. Is this just a bump in the road? Or is the whole industry now in serious trouble? True, we can understand the reasons why plant-based foods were suddenly all the rage. The number of vegans in the UK is estimated to have quadrupled over the past 15 years, and that is typical of most developed countries. Meat and dairy products are less and less popular all the time. And, of course, plant-based protein is a lot more climate friendly than the traditional farmyard sort (about a third of methane emissions come from meat and dairy livestock). Oat-based milk and pea-based meats are healthier, more humane and better for the planet as well. It is hard to work out anything not to like about that combination. It fits the zeitgeist.

No doubt plant-based proteins will turn into a major industry over time. And yet, like so many exciting technologies, it also turned into a bubble.

And yet, even once that is taken into account, the emerging industry still faces three big challenges. First, the technology and supply chains are a lot more troublesome than anyone first thought. It is easy for companies to blame “supply issues” right now, when deliveries of everything are getting snarled up, but it may also be a sign of deeper problems.

Creating plant-based milks, meats and cheeses, as well as the cultured fish and lab-grown proteins, all of which have attracted a lot of investment, may work fine in the lab, or in small-scale factories. But creating a worldwide system for mass production is far harder. No one should be surprised if not everything runs to plan.

Next, the corporate giants have started to move into the industry big time. The Swiss conglomerate Nestlé only rarely stirs itself to launch a new brand, but early this year it started up Wunda to take the fight directly to Oatly in the milk market. The company behind Kit Kat, Perrier and Nescafé can trace its origins back to the Anglo-Swiss Milk company, and clearly isn’t planning to give up the dairy market, alternative or otherwise, without a heck of a fight. 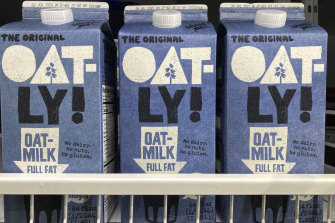 Its French rival Danone has already acquired the Follow Your Heart range of vegan mayonnaise and the Earth Island range of spreads, while Unilever this year partnered with the food tech company Enough to develop plant-based meat products. These are huge companies, with massive resources, and they have seen what Tesla did to the giants of the auto industry, and, quite sensibly, decided not to give up the future quite so meekly. If they can crush their new rivals in their infancy, they will.

Finally, food is a brutally competitive global business. It is characterised by wafer-thin margins, loaded up with subsidies, and protected obsessively by governments who fret about food security, and are often at the beck and call of their farming lobbies. It is going to be a hard industry to disrupt – the established interests have an awesome amount of power.

True, lots of us want to cut down on meat and dairy consumption. It is healthier, makes us feel better about ourselves, and it is better for the planet as well. There is lots of room for innovation in an industry that hasn’t seen much in the way of new thinking since chemical fertilisers and combine harvesters. No doubt plant-based proteins will turn into a major industry over time. And yet, like so many exciting technologies, it also turned into a bubble. That is now bursting – and a lot of investors will get burned in the process.