Why Australia’s economy is not a freak of nature

Time to liberate Australia's economy. It needs to be freed from folklore that's built up around the 27-year stretch sans recession. 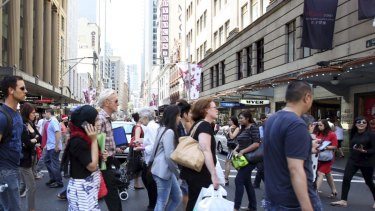 Australia’s economy has long been a curiosity to the rest of the world. Credit:Sasha Woolley

The reality is that the expansion waxed and waned during that period. Business cycles aren't dead Down Under, despite Federal Reserve Chairman Jerome Powell's only half-joking proposition in November that they are defunct in Australia.

It's waning now. That's good because once Australia's economy is seen as normal, subject to ups and downs, then standard policy prescriptions can be deployed. Few things are more standard than monetary policy, which has been on ice for more than two years.

It wasn't inconceivable that Reserve Bank of Australia Governor Philip Lowe would serve his seven-year term without moving interest rates up or down. Sure, rates could move higher at some point in the next few years, so most thinking went. Only recently did a few brave souls venture that borrowing costs could move down.

Lowe shook complacency this week in a typically thoughtful speech. He called time on the upward bias inherent in even the central bank's stance, shifting to neutral, meaning that a cut in rates is – in theory – as possible as a hike. Given that Lowe climbed down from a predisposition to hike, the bar to a reduction doesn't look massively high.

"If Australians are finding jobs and their wages are rising more quickly, it is reasonable to expect that inflation will rise and that it will be appropriate to lift the cash rate at some point. On the other hand… it is possible that the economy is softer than we expect, and that income and consumption growth disappoint. In the event of a sustained increase in the unemployment rate and a lack of further progress towards the inflation objective, lower interest rates might be appropriate at some point."

The course adjustment can be attributed to anemic household spending, linked to a slide in housing prices, and inflation's failure to ignite despite a fairly robust labor market. Too-low inflation is scarcely a local phenomenon; it's something many central bankers have wrestled with for years. There's also China, where a slowdown has rippled through Asia and beyond.

The Reserve Bank didn't invent the narrative of a death-defying economy. The absence of two consecutive drops in gross domestic product during the 2001 and 2008-2009 periods is to be praised. Many things were working in the country's favor then, not least China's rapid growth and its seemingly insatiable demand for resources. That looks sepia-tinged.

Australian politicians, past and present, and not a small number of business leaders also fanned the image abroad of the economy as something that needed to be taken to a lab for study. How many events in New York or Washington did I have to sit through where people burnished tirelessly – sometimes tiresomely – the long era without recession? I have never heard Lowe buy into this kind of propaganda.

He didn't say the sky is falling in his speech this week walking back the RBA's tightening bias. It's great that he called out some of the heavy-breathing that accompanied the International Monetary Fund's new forecasts and "overly excitable" media reporting of recent market gyrations. I'm all for perspective.

The lens through which the world views Australia could use some cleaning. This economy isn't a freak of nature. It isn't immune from global currents and domestic shoals that erode the outlook.

Almost normal. Let it be judged as a normal economy would, not as a legend.