Why Jerome Powell pivoted on inflation

Inflation has been building for months in the world’s largest economy. But it was over 13 days that Jerome Powell, the Federal Reserve chair, decided the central bank needed to get more serious about trying to choke it off.

The story of the latest Powell pivot — the abrupt move toward tighter monetary policy announced on Wednesday — shows a great deal about the decision-making approach of the man President Joe Biden has nominated for a second term as the nation’s top central banker. 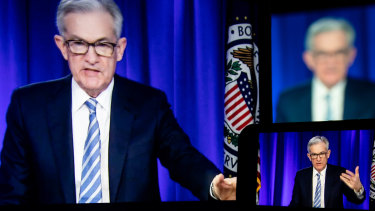 Jerome Powell at the news conference on Wednesday explaining the Fed’s move.Credit:Bloomberg

In short: He may stick to his chosen policy path in the face of public pressure as long as evidence doesn’t undermine his assumptions, but he’s willing to change course quickly when data emerges that suggests the world is different.

The Fed’s policy committee announced on Wednesday that it would speed up the end of the central bank’s bond-buying program and was likely to raise interest rates sooner than had been envisioned as recently as early November. The mantra of Fed officials through the summer months that inflation was likely to be transitory is now, officially, history.

More than usual in a Federal Reserve news conference, Powell narrated the events that caused his policy pivot.

Complaints about high inflation have been surging since the spring, but Powell and the Fed stuck to their view that it would fade and that they needed to move gingerly in pulling back on stimulative policies. That started to change with a piece of economic data on October 29 that is closely followed by economists but gets relatively few headlines — a surge in the employment cost index.

That surprisingly high number suggested that employers’ spending on wages and benefits was rising faster in the summer months than economists had thought. It put Powell on alert that inflationary pressures had the potential to be broader and longer lasting than the Fed had been expecting.

[Powell’s] first term as Fed chair has, in effect, been an embodiment of a quote possibly apocryphally attributed to John Maynard Keynes: “When the facts change, I change my mind. What do you do?“′

That, he said, made him consider adjusting plans for a Fed policy meeting five days later, to wind down the central bank’s bond-buying program faster than analysts expected. He and his colleagues on the Federal Open Market Committee instead stuck to the plan, but two more data points in the ensuing days were making clear that inflation risks were building.

First, on November 5, a robust employment report showed strong job creation and a rapidly falling unemployment rate. Then, on November 10, the Consumer Price Index showed a surge in inflation. That was enough for Powell. As colleagues began giving speeches and interviews in the days that followed, they made clear that a more hawkish approach to monetary policy was in the offing, which Powell affirmed in congressional testimony last week.

“I think that the data we got toward the end of the fall was a really strong signal that inflation is more persistent and higher, and that the risk of it remaining higher for longer has grown,” he said in the news conference. “And I think we are reacting to that now.”

The particular constellation of evidence that emerged from those three data points from October 29 to November 10 — since confirmed by other data releases — suggested that an inflation problem that once seemed mainly confined to automobiles, airfare and a handful of other products had become more broad-based.

And as employers pay more in wages and other costs to keep their workers, the possibility that they simply pass those costs on to customers in a self-reinforcing cycle of higher pay and higher prices has become more real. This so-called wage-price spiral was a feature of the sustained high inflation that lasted from the late 1960s to the early 1980s.

Central bankers always face a tension between underreacting and overreacting to the latest economic headlines. On one hand, if they react too quickly to incoming information, policy can become erratic, creating unnecessary market volatility and failing to see through temporary forces that buffet the economy.

But if they react slowly, it can create a risk of becoming out of step with the realities of the economy. Historical examples include when the European Central Bank increased interest rates in 2008 even as what would become the global financial crisis was starting to drag down the European economy.

In the worst case, it could drive the economy to bad results out of some mix of stubbornness, ego and a refusal to admit a mistake.

Powell’s strategy has been to set out a forecast of how Fed leaders believe the economy is likely to evolve, stick to his guns even in the face of outward pressure, but then be ready to change course abruptly if the evidence becomes compelling that the forecast was wrong.

That is also the pattern exhibited in an earlier Powell pivot, in late 2018 and early 2019, although that was a shift in the opposite direction from this one.

The Powell Fed raised interest rates four times in 2018, earning withering public attacks from President Donald Trump. And at its December 2018 meeting, almost all the officials gathered envisioned multiple additional rate increases over the course of 2019 to head off inflation.

In the days that followed, markets plunged and bond and other markets suggested the Fed had made a mistake — that the economy was not in position to withstand those rate increases. Powell abruptly changed tone in January 2019, and by the middle of the year was cutting rates rather than raising them.

In that episode as now, Powell resisted the accusation that the Fed had made a mistake. (“I wouldn’t look at it that we’re behind the curve,” he said on Wednesday. “I would look at it that we’re in position now to take the steps that we’ll need to take, in a thoughtful manner, to address all of the issues, including that of too-high inflation.“)

His first term as Fed chair has, in effect, been an embodiment of a quote possibly apocryphally attributed to John Maynard Keynes: “When the facts change, I change my mind. What do you do?”

As they weigh whether to confirm him to a second term or not, senators will ultimately be judging whether the Powell pivots, especially this most recent one, have been too fast, too slow, or just about right.