Why modern politics goads us to be greedy, and forget the needy

Mark, a voter in the Melbourne electorate of Higgins, told the ABC’s Virginia Trioli this would be the last federal election he’d be alive to vote in. So he’d decided his vote should not be for him, but for the younger generation coming after him.

He wanted to cast his final vote for the party that best represented young people’s aspirations for their future. So he went to the local high school and got permission to talk to the senior students. 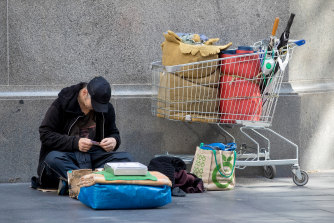 Poverty isn’t an unfortunate but unavoidable fact of life, it’s a policy choice, according to ACOSS.Credit:Getty Images

And which side did they pick? “It’s the Greens. And that’s the first and last time I’ll be voting for them,” he said.

It’s a sad commentary on modern politics that no mainstream politician would dare suggest we vote for them because they’d best advance the public interest. They know that we know their greatest interest is in advancing their own career so, to attract our votes, they offer bribes.

They’ve trained us to see elections as transactional, not aspirational. You want my vote? What are you offering? And is that better or worse than the other side’s offering?

That’s how, with climate change and so many other, lesser problems needing attention, we’re devoting most of this campaign to grappling with the great challenge of our age … the cost of living. Really?

I can’t be the only voter in the land whose comfortable lifestyle is not in any way threatened by the rising cost of living.

Now, I don’t blame people on low incomes with big commitments who really do struggle to get by for wanting to see what the two sides are offering that might make their lives easier.

But you don’t have to be struggling to tell yourself your life’s a struggle, and you wouldn’t mind voting for a pollie offering you a few more bangles and baubles.

I can’t be the only voter in the land whose comfortable lifestyle is not in any way threatened by the rising cost of living.

A reminder from Struggle Street would be timely. My co-religionists, the Salvos, release today a report on how their clients are faring, preparatory to knocking on your door the weekend after the election. (If you’re wondering, at present I hold the rank of backslider, but there’s still a lot of Salvo in me.) 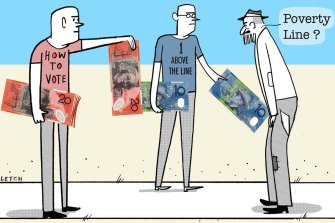 The Salvos took a random sample of 10,000 of the people who had attended their emergency relief centres in the past 12 months. More than 1400 people responded to the request to complete an online questionnaire.

The survey showed that, after paying for housing costs, 93 per cent of respondents were living below the poverty line, with almost two-thirds needing to ask for financial help from family and friends.

The high proportion of these people’s meagre incomes devoted to rent is their biggest problem, leaving too little for food and all the rest.

Although some respondents would be working poor, most would be on government support payments, including the parenting payment and disability support payment. Among these people, 60 per cent say they can’t afford medical or dental treatment when they need it, and well over half say they’re going without some meals. 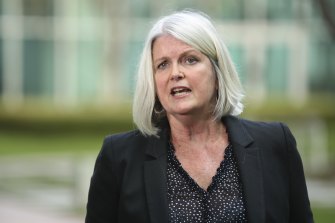 Dr Cassandra Goldie said that a boost to Jobseeker should be among the government’s top priorities.Credit: Alex Ellinghausen

Dr Cassandra Goldie, head of the Australian Council of Social Service, reminds us that poverty isn’t an unfortunate but unavoidable fact of life, it’s a policy choice. We have a system of support payments that’s supposed to keep people out of poverty, but choose to set the payment level below the poverty line.

A recent national poll of 1000 adults commissioned by ACOSS and conducted by Ipsos has found that 76 per cent of respondents say they couldn’t live on $46 a day, the present rate of Jobseeker. Two-thirds agree the rate should be above the poverty line, which is $70 a day.

When the first lockdown in 2020 prompted the Morrison government to almost double the rate of Jobseeker, the payment rose above the poverty line. People couldn’t believe how much easier their lives had become, and requests for help from outfits like the Salvos fell away – although many overseas students and other holders of temporary visas needed feeding.

But Scott Morrison’s Christian charity lasted only six months. In the end, the biggest permanent increase he could afford was $6 a day. Need for help from the Salvos has returned. In this campaign, however, Morrison has been able to promise various new benefits to self-funded retirees who, by definition, are too well-off to qualify for the age pension.

When Anthony Albanese abandoned Labor’s promise from last election to review the level of unemployment benefits, he pointed to the big budget deficit he’d inherit. I can see his problem. If he were to spend more helping people living below the poverty line, how could he afford the $9000-a-year tax cut he (like Morrison) has promised me and my ilk in 2024? He’s saving up.

Last word to my superior officer, the Salvos’ Major Bruce Harmer: “We’re calling on the next elected federal government to focus on the most vulnerable in society. Being able to meet basic living expenses should be the norm for all in an advanced economy like Australia, and not something we are still discussing in 2022.” Amen to that.

Cut through the noise of the federal election campaign with news, views and expert analysis from Jacqueline Maley. Sign up to our Australia Votes 2022 newsletter here.