Short sellers of Advanced Micro Devices Inc. have faced destruction in 2018, losing nearly $3 billion on paper in what one analyst contends is a prolonged “stealthy short squeeze.”

Shares gained for a seventh consecutive session Monday, surging more than 12% and hitting an intraday high of $27.30 after AMD unveiled its Radeon Pro V340 data center card on Sunday. In the past seven sessions, shares have rallied 39%. The last time AMD shares logged seven straight sessions of gains was a streak that ended on Nov. 21, 2016, which resulted in a 42% overall gain, according to FactSet data. Shares are also coming off their best week, with a 21% gain, since the company released its Epyc chip more than a year ago and are at their highest prices since 2016.

All told, short sellers have lost $2.7 billion as a result of AMD’s gains in 2018, according to Ihor Dusaniwsky, an analyst with financial technology and analytics firm S3 Partners.

“Most of 2018 has been a stealthy short squeeze for AMD short sellers,” Dusaniwsky told MarketWatch in an email. ”There was no one-day stock price spike that usually triggers a short squeeze, but rather it was a four-month steady thump of new year-to-date stock price highs that drove out 30% of the shorts since April.” 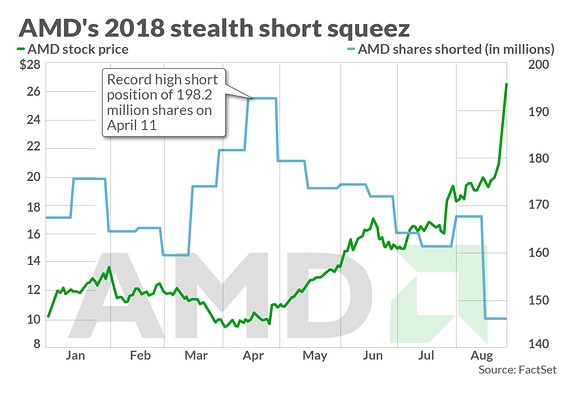 Short interest in AMD shares hit a record high in April, reaching 198.2 million shares, or more than 20% of outstanding shares. Short positions have fallen by 29.3 million shares, or nearly 18%, in August alone, costing short sellers $1.24 billion for the month.

AMD short interest is currently $3.32 billion, or 138.6 million shares shorted, making up 16.2% of the float, making it the third largest short in the world-wide semiconductor sector behind Nvidia Corp.NVDA, +1.86% with $3.77 billion shorted, and Intel Corp. INTC, +1.34% with $3.56 billion shorted, according to Dusaniwsky.

Of the 32 analysts who cover AMD, 13 have buy or overweight ratings, 14 have hold ratings, and five have sell ratings, with an average target price of $17.38, according to FactSet. AMD has produced profits in each of the last four quarters, after reporting losses in 12 of the previous 14 quarters, and recently reported its highest quarterly revenue since 2008.

Get the top tech stories of the day delivered to your inbox. Subscribe to MarketWatch's free Tech Daily newsletter. Sign up here.