Shares of Bank of America Corp. took a dive in early trading Tuesday, after a warning that growth in net interest income for the year will fall short of expectations, as a slowing economy caps longer-term interest rates.

The stockBAC, +0.10% slumped as much as 2.8% intraday before paring losses to be down 0.8% in active midday trade. It was one of just two of 68 equity components of the SPDR Financial Select Sector exchange-traded fundXLF, +1.35% that were losing ground on the day.

Volume of 55.2 million shares made the stock the most actively traded on the New York Stock Exchange.

B. of A. reported before the open first-quarter earnings that beat expectations, but revenue that came up short. The stock was down about 0.5% in premarket trading after the results, and just before the start of the post-earnings conference call with analysts.

Donofrio said with the economy expected to grow this year “more moderately” than it did last year, longer-term interest rates have declined and are expected to remain lower. As a result, he said net interest income (NII) for 2019 to be up “roughly half the pace of 2018,” according to a transcript provided by FactSet. See Bond Report. 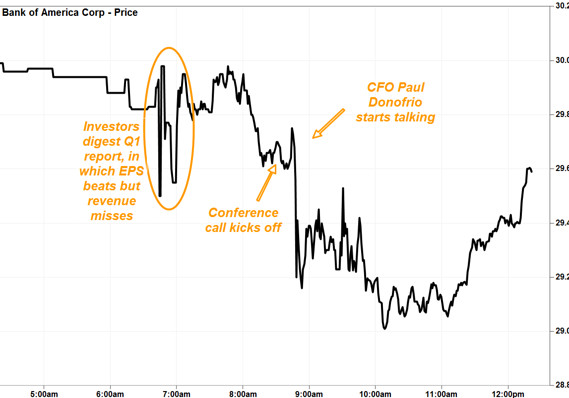 Donofrio continued to say 2019 NII growth is expected to be “roughly” 3%, assuming the yield curve remains flat and the Federal Reserve doesn’t not raise interest rates, as is widely expected.

Analyst James Mitchell at Buckingham Research reiterated his buy rating and $35 price target on B. of A.’s stock, but said he expects the NII warning to cap gains for now.

“Although not an overly material impact on forward EPS, particularly given better expenses and conservative credit cost assumptions, it is likely to weigh on the stock in the near term given investors’ perception that [Bank of America] is the most sensitive to U.S. rates among the large banks,” Mitchell wrote in an emailed note to clients.

See related: Here’s one sign in bonds that the U.S. is poised for a sharp economic slowdown in 2019.

B. of A.’s lowered NII guidance follows a similar warning from rival consumer banker Wells Fargo & Co.WFC, +1.94% last week, when Wells’ stock swung lower early trading after its CFO said on the post-earnings conference call that NII was expected to decline versus previous expectations of a slight increase.

Bank of America said it repurchased $6.3 billion worth of its common stock during the first quarter. The bank didn’t provide details regarding prices it paid, but the trading range during the quarter was $24.01 (Jan. 2 intraday low) to $30.14 (March 19 intraday high), and the volume-weighted average daily closing price (VWAP) was about $28.25.

Based on the VWAP, B. of A. may have repurchased about 223 million shares, or about 2.3% of the shares outstanding.