Caterpillar Inc.’s stock chart has produced a “death cross” on Tuesday, to snap the longest bullish trend-following streak in at least 46 years, as the list of bearish technical patterns that have appeared in the last month just got a little longer. 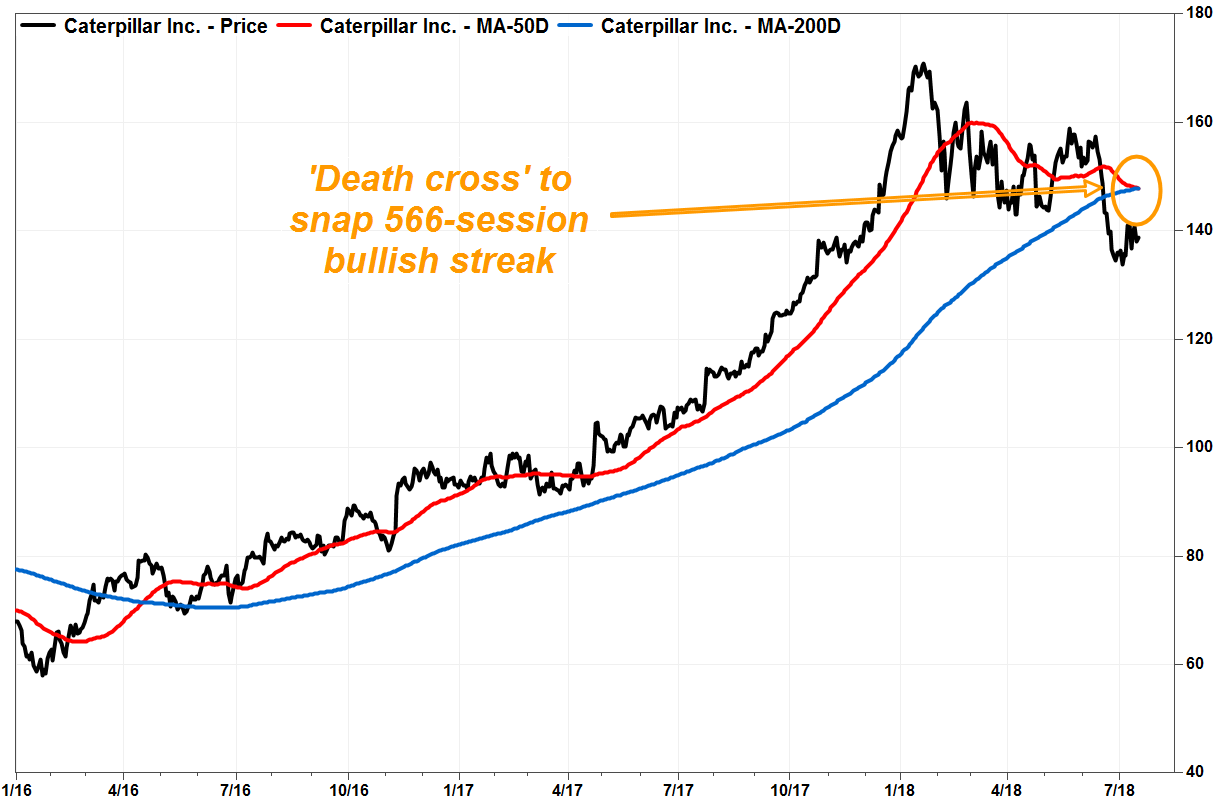 As the stock entered a bear market, when it shed 2.4% on June 25 amid worries over the collateral damage from escalating trade tensions, it also broke through a previous strong support zone from about $138 to $140, which stopped previous breakdown attempts in their tracks. 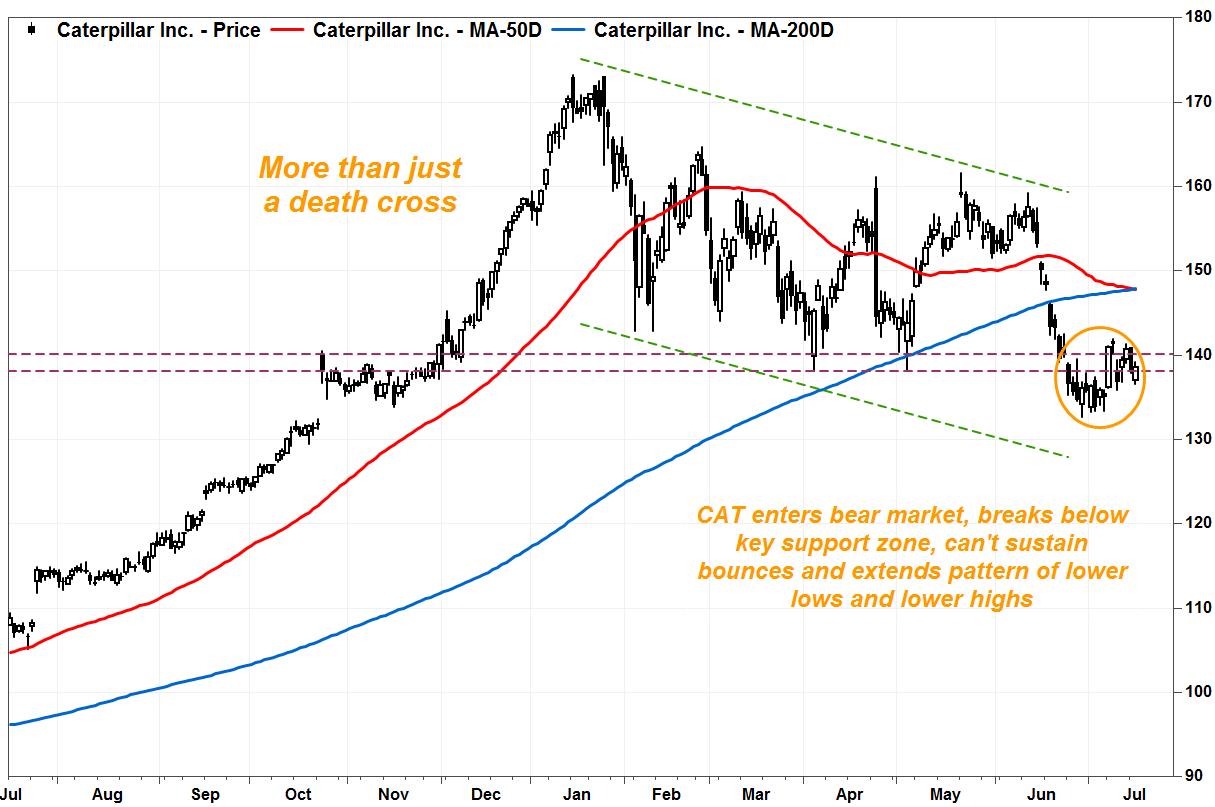 Technicians view breaks of previous key support levels, following significant highs, as a warning that bulls are no longer looking to add to their positions, and instead are looking to cash out. The stock’s inability to sustain bounces back above that support zone suggests sellers may be lining up.

The break of support also extended a pattern of lower lows and lower highs, which followers of the century-old Dow Theory of market analysis believe is the definition of a downtrend. It’s similar to the way one can determine the direction of the tide by marking how far up the beach successive waves travel before petering out.

The stock edged up 0.2% in morning trade Wednesday, but has lost 12% year to date, putting it among the worst performers in the Dow Jones Industrial Average DJIA, -0.03%this year. The stock was the second best Dow performer in 2017 with a 70% surge and the best performer in 2016 with a 36.5% rally.

Of course, even multiple bearish patterns are no guarantee of a lasting weakness, just warnings of what could happen. 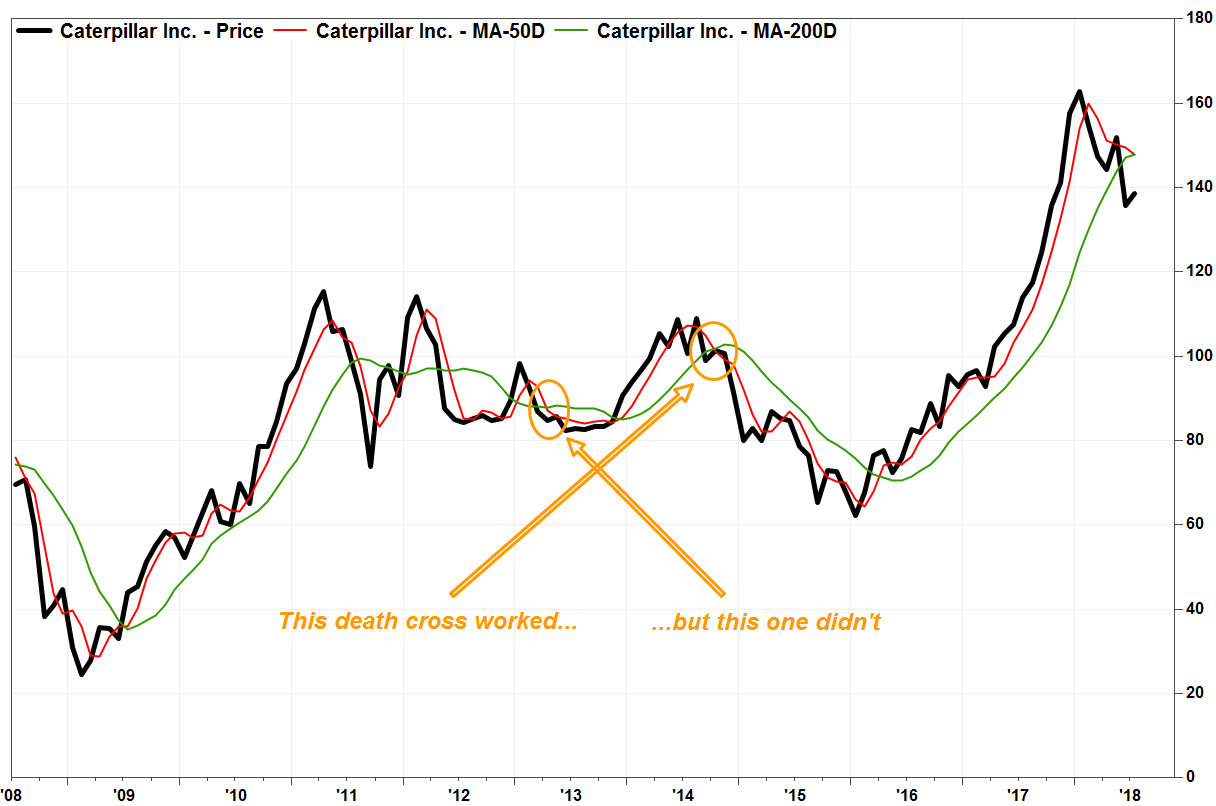 When the Aug. 19, 2011 death cross appeared, the stock had started a bear market two weeks earlier, as it broke previous strong support to kick off a pattern of low lower troughs and lower peaks. The stock bottomed less than seven weeks later, 11.8% below where the death cross appeared and 39% below the April 28, 2011 bull-market peak.

What might make this time a little different, is that there’s more to the stock’s weakness than just a change in technical sentiment. 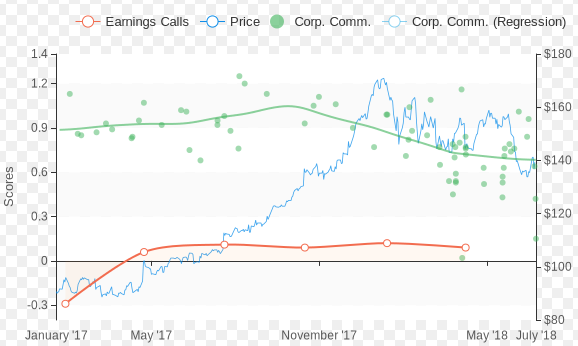 The chart above shows that even though Caterpillar kept reporting earnings and revenue that rose above expectations, management sentiment on earnings calls remained cautious, and for other corporate communications, it has declined steadily amid uncertainty over President Trump’s trade policy.

Read more: Trade war, tariffs and inflation will be the big worries this earnings season.