Novartis NOVN, -0.63% has said that, a month after entering an one-year, $1.2 million contract with Cohen’s consulting company, the relationship was essentially over, as the consultants could not “provide the services that Novartis had anticipated.”

But then-Chief Executive Joe Jimenez and Cohen communicated multiple times after that and over the course of 2017, including an email exchange in which Jimenez sent Cohen Novartis’ “ideas to lower drug costs in the U.S.,” which were to be discussed with the Trump administration.

The finding is one of several damning conclusions of the Friday report, “White House Access for Sale,” which was prepared by Democratic senators and based on documents provided by Novartis regarding its communications with Cohen.

Novartis has said that the company could not end its contract with Cohen — and stop paying him $100,000 a month — “as the contract unfortunately could only be terminated for cause.”

The Democrats’ report, though, begs to differ.

“It appears in fact the company could have terminated Mr. Cohen’s contract,” the report found, with one such out in the contract stating that “satisfactory performance” was required. 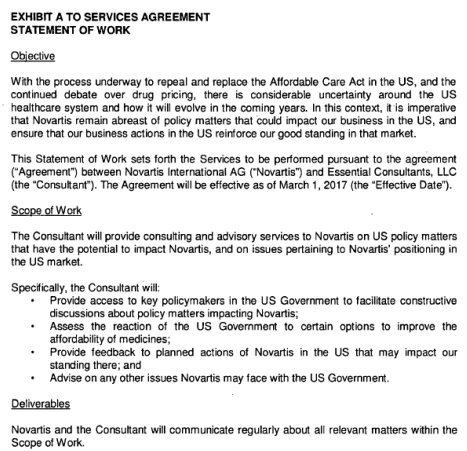 In a Friday statement, Novartis said that it disagrees with the report’s conclusions that it misled the public. The company said it met only once with Cohen, on March 1, 2017, and didn’t ask Cohen to do anything on its behalf after that. Cohen initiated the other communications with Jimenez, including the drug price ideas, which he solicited, the company said.

“As we have already acknowledged, Novartis made a mistake in entering into the contract with Michael Cohen,” the statement said. “And in hindsight — and certainly knowing everything we know now — we should have tried to terminate the contract with Mr. Cohen regardless of our views at the time of its legal enforceability.”

Novartis’ relationship with Cohen began in 2016. A few weeks after Trump was elected in November, Jimenez was eating dinner with Hain Celestial’s Irwin Simon, who called Cohen and introduced him to Jimenez, according to the report.

Jimenez would later set up a phone call with Cohen just days after pharmaceutical executives met with Trump in late January of 2017.

According to Novartis, Cohen told them that he “was knowledgeable about the individuals President Trump was likely to appoint and could provide the Company with information as to how these individuals would approach the healthcare-related issues Novartis was focused on.”

Novartis’ initial contract with Cohen similarly proposed that he provide “access to key policymakers” in the Trump administration, and that he “assess the reaction of the US Government to certain options to improve the affordability of medications,” according to the report. Cohen also represented himself as Trump’s lawyer when speaking with Novartis, according to the report, including through signature lines like “Personal Attorney to President Donald J. Trump.”

Later communications regarding drug pricing occurred around the same time as a report that Trump had drafted an executive order about drug pricing that was very industry friendly, and included several proposals that had come from industry.

Of the six drug pricing proposals that Jimenez sent Cohen, some are very like what was eventually included in Trump’s drug pricing blueprint, such as the criticism of “global freeloading” — or other countries paying lower prices for drugs — the promotion of value-based pricing for pharmaceuticals and point-of-sale rebates at pharmacies.

The proposals provided by Jimenez were “well-known ideas for lowering the cost of pharmaceuticals that had been discussed publicly in the industry,” Novartis said.

Related: Drug stocks surge on report that President Trump plans to ease industry regulations and The Trump drug price plan: who it affects and how

Because Novartis would not send the senators its own communications about Cohen and his role, there’s little information in the report about how the company discussed the consulting arrangement internally. But the report does state that current Chief Executive Vasant Narasimhan never spoke with Cohen.

Cohen also spoke with Jimenez about opioid lawsuits against pharmaceutical companies, according to the report, though there is little detail about precisely what was discussed. Hundreds of lawsuits have been filed in the U.S. against various drugmakers that manufacture opioids.

The report also opens a window into pharmaceutical industry wheeling and dealing.

Novartis had previously met with the privately held pharmaceutical company Yamo Pharmaceuticals, which is developing a therapy for autism, but decided not to invest in the company.

Cohen had a backdoor relationship with Yamo, which is connected to an investment firm called Columbus Nova that paid Cohen about $500,000, according to the report.

Columbus Nova encouraged Yamo to reach out to Cohen, who then asked Novartis’ Jimenez to “see if [the Yamo investment opportunity] was handled properly.” Jimenez said he would personally look into it.

Novartis, though, says the emails didn’t change anything, and no investment was made.