10 years after Lehman’s bankruptcy, these are the big lessons for investors

The S&P 500 these days is dilly-dallying just below last month’s all-time high.

But if you zoom out, it’s a more impressive picture, with the stock benchmark up 141% since Lehman’s bankruptcy on Sept. 15, 2008.

And that watershed moment for the global financial crisis seems like the topic du jour.

“Everyone is reflecting upon the 10-year anniversary of Lehman Brothers’ bankruptcy filing,” writes JonesTrading’s Mike O’Rourke.

While there’s going to be scads of anniversary commentary, it’s right to look back and learn, says Josh “The Reformed Broker” Brown. “None of it is extraneous or tedious in my opinion. We have to remember it, the people, the details, the opinions, the turning points,” Brown writes.

So our call of the day focuses on Lehman’s lessons for investors. It comes from two sources — DataTrek Research co-founder Nicholas Colas and Andrew Thrasher, a portfolio manager at Financial Enhancement Group and the founder of Thrasher Analytics.

The big gains for Apple AAPL, -1.34% , Google parent Alphabet GOOG, -0.02%GOOGL, -0.21% and the like provide “an object lesson in the importance of technological innovation in driving stock prices over the long term,” Colas adds. “That, in the end, is the most important takeaway from Lehman Brothers and the financial crisis.”

Meanwhile, Thrasher says he developed an “aversion to risk” due to the crisis, but he’s turned that into a “positive professional attribute,” rather than grounds for staying totally in cash. He warns that you need to get in the investing game, if you’re still sitting on the sidelines after being spooked by the 2008-9 selloff or subsequent volatility.

“I hope others in my generation can shed their fears of investing,” Thrasher writes. “A lack of exposure to compound interest and market growth will hold back countless millennials unless action is taken soon.”

Read more: 2 lessons from Lehman’s 2008 collapse can save your investments

And: A decade after the crisis, the SEC still hasn’t addressed executive pay

“It really made us have a wake-up call: ‘How do we want to live our lives?’” —Federal lobbyist Scott Dacey reflects on the 9/11 attacks, which happened on this day 17 years ago.

Dacey is among the uncounted number of people who moved quietly away from their lives near the hijacked-plane strikes that killed nearly 3,000 people in New York, the Pentagon and a Pennsylvania field, says an AP report. He and his family reside in New Bern, N.C., having left Washington, D.C.

Check out: Don’t sell if another 9/11-scale attack sinks the market 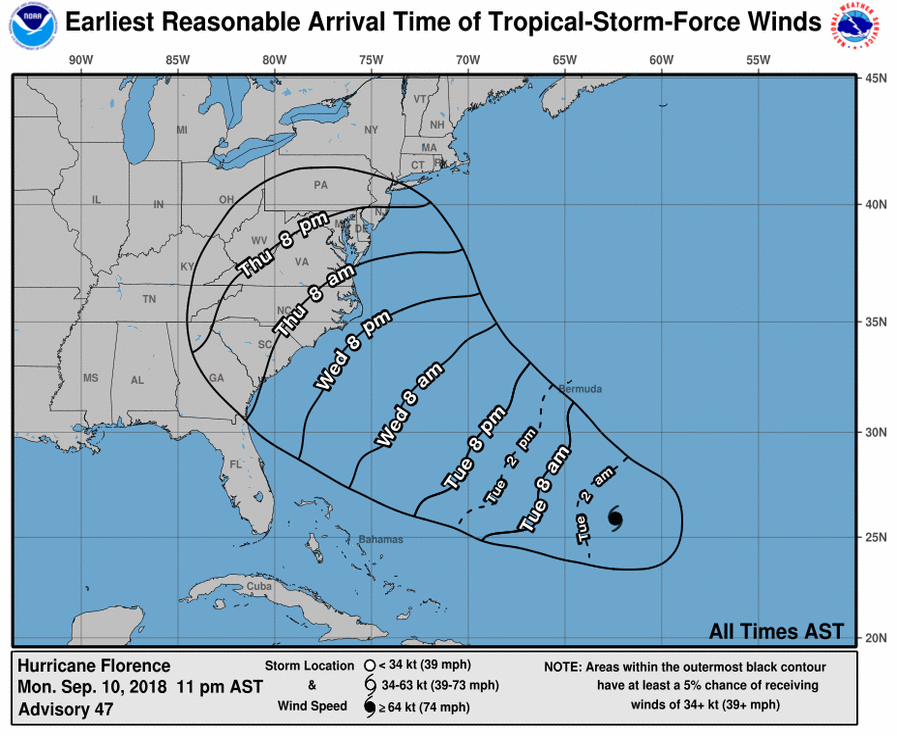 “Don’t concentrate on the exact forecast track of Hurricane Florence,” says the National Hurricane Center on Twitter, as it offers charts like the one shown above.

“Significant effects will extend outside the cone, and will arrive at the coast sooner than the eye.”

MarketWatch’s Myra Saefong reports that for the U.S. oil market, it’s all about concerns surrounding energy demand, not production, as Hurricane Florence approaches.

Helping to keep the focus on the Lehman anniversary, Ben Bernanke, Tim Geithner and Hank Paulson are due to talk about the financial crisis shortly after the opening bell.

A second meeting between President Trump and North Korean leader Kim Jong Un appears to be in the works.

Shares in Sonos SONO, +13.28% look set for a big down day after the company’s earnings report late yesterday. But the speaker maker’s stock had rallied into the release, soaring 13% in Monday’s session.

Retailer Francesca’s FRAN, -2.97% is among the companies on the earnings docket ahead of the open.

Three economic reports are on tap today, with one covering small-business sentiment arriving before the open and showing record optimism. Once trading is underway, watch for releases on job openings and wholesale inventories.

Federal Reserve Gov. Lael Brainard and the Minneapolis Fed’s Neel Kashkari are due to make remarks this afternoon.

Walmart WMT, +1.12% is getting blasted for selling shirts with Soviet symbols: “You wouldn’t buy Nazi-themed clothing, would you?”

Hundreds of Roman gold coins were just found in this theater’s basement.

A “First Man” review: The Neil Armstrong movie is “an awe-inspiring space spectacle.”

Need to Know starts early and is updated until the opening bell, but sign up here to get it delivered once to your email box. Be sure to check the Need to Know item. The emailed version will be sent out at about 7:30 a.m. Eastern.

And sign up here to get the Friday email highlighting 10 of the best MarketWatch articles of the week.