Transportation companies have been among the strongest performing assets in the public markets over the past few years. Extremely strong trendlines dominate the charts, which is one of the primary reasons that the sector has been a favorite of active traders. Recent pullbacks across the sector over the past few trading sessions are now presenting lucrative risk/reward setups, which suggests that this could be a segment to keep an eye on over the weeks to come. (For further reading, see: How to Analyze the Transportation Industry.)

Traders who are interested in gaining exposure to niche sectors such as transportation tend to flock to exchange-traded products such as the iShares Transportation Average ETF. Fundamentally, this fund comprises 20 holdings from segments such as U.S. airlines, railroads and trucking. Taking a look at the chart below, you can see that the bulls are clearly in control of the underlying trend and that the dotted trendline has provided support on each attempted pullback since the start of the move in 2016. As mentioned above, the recent pullback toward the trendline is creating a lucrative trading setup based on risk-to-reward, and it could prove to be enough of a catalyst for sending prices higher yet again. Target prices will likely be set close to the swing high near $200, which means that most technical traders will be looking to make $12 per share of profit by risking approximately $0.82. (For further reading, see: 3 Charts That Suggest Transport Stocks Are Headed Higher.) 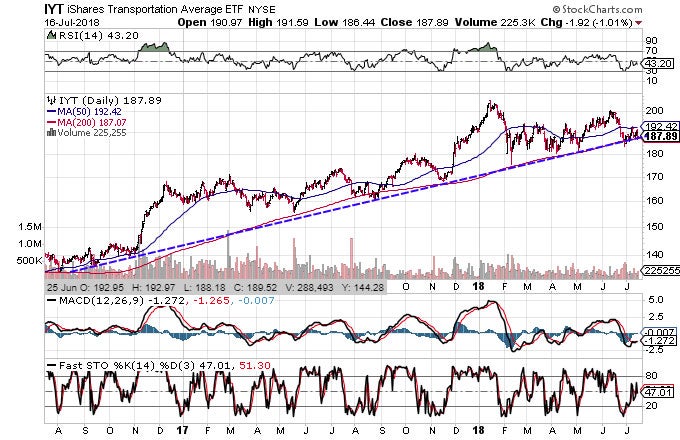 One of the top holdings of the IYT ETF that could be of specific traders over the coming days is Norfolk Southern. Taking a look at the chart, you can see that the 50-day and 200-day moving averages have consistently provided support on attempted pullbacks, which many will expect to happen again after Monday’s decline of 2.65%. The recent breakout beyond the dotted resistance line suggests that the momentum is in favor the bulls, and a retest of a key trendline like the one shown is common behavior in order to establish confidence in the placement of stop orders. Based on the pattern, active traders will likely set their 2018 target prices near $175. 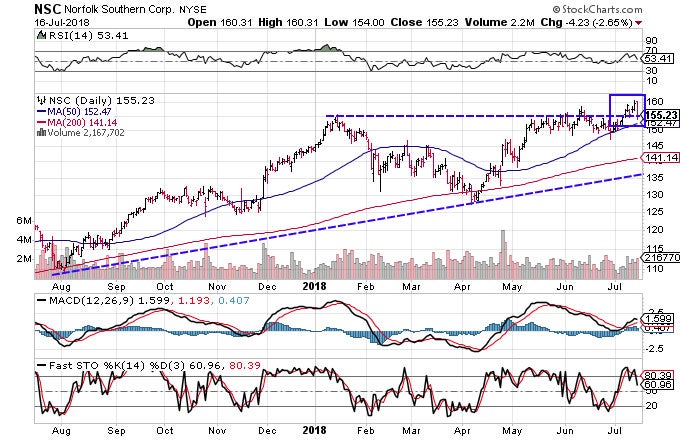 [The Technical Analysis course on the Investopedia Academy includes interactive content and real-world examples to help you build your trading strategy, from managing risk to determining your target price.]

The chart of Landstar System is currently one of the most interesting within the transportation sector. The recent 3% decline has sent the price toward the combined support of an ascending trendline and its 200-day moving average. All eyes will be on whether the bulls respond and send the price higher again like they’ve done in the past. Stop-loss orders will likely be placed a few cents below $106 in case the weakness continues. The defined risk/reward makes this one of the most lucrative trades currently within the sector. (For more, see: 3 Charts That Suggest It’s Time to Buy Into Transportation.) 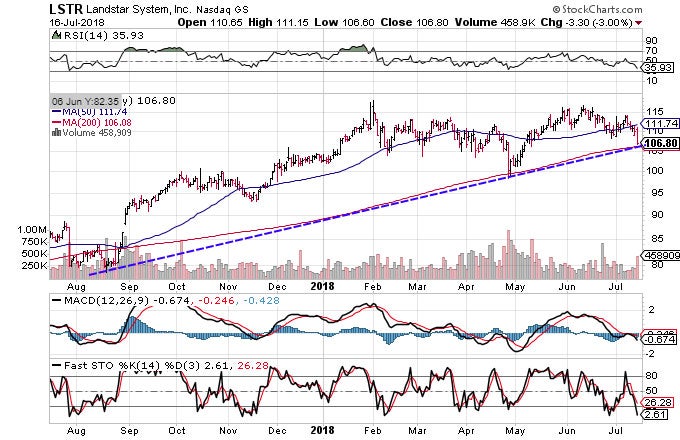 The transportation sector has consistently been one of the top performers in recent years, and the strong uptrends have made it a favorite among active traders. The recent pullbacks found across the sector have sent prices toward key support levels and could be one of the best buying opportunities of the year for those willing to take on risk. (For more, see: Transportation Securities Bullish.)

Charts courtesy of StockCharts.com. At the time of writing, Casey Murphy did not own a position in any of the securities mentioned.