Bank of Queensland chief executive George Frazis says the bank is open to more takeovers, after reviewing four potential acquisitions in the last 18 months in a quest to transform the mid-sized lender into a genuine challenger to the big four banks.

“Although the benefits of scale are becoming less important, they’re still important,” Mr Frazis said. “We’re constantly looking at opportunities. Do they align with our strategy? Does it make sense with our shareholders financially or add real capability? Or accelerate our transformation?” 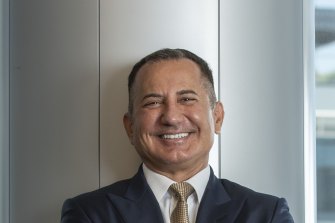 Mr Frazis said while there was nothing concrete on the cards he would review everything from neobanks to traditional lenders for opportunities to grow BoQ’s customer base and further diversify its business model.

The ME Bank takeover was revealed by The Age and Herald in February, after the boutique lender’s 26 industry super fund shareholders were asked to sell their stake in the bank. While all shareholders supported the deal on paper, there were some who wanted to retain the bank as part of an alternate financial ecosystem to mainstream banks.

Mr Frazis said successful takeovers can only occur if it’s “friendly” and while he was not aware of the internal rumblings, he stressed it was ME Bank that wanted to sell rather than BoQ wanting to buy.

Mr Frazis, who joined BoQ from Westpac in 2019, is well aware of the importance of ME Bank’s role in Victoria and has committed to retaining the bank’s own branding and continuing collaboration with the industry funds, including special deals on loans for members.

“The heritage of ME Bank is really important for us. There’s a strong link with members of industry funds. We will continue enhancing that strong link, providing compelling services to those customers,” he said.

The acquisition was a strategic and financial fit for BoQ, Mr Frazis said, that will double its retail bank and spread its operations along the east coast.

“It makes us more resilient but also more aligned to the economic growth of Australia,” Mr Frazis said. “It also balances our retail and business bank to be about 50/50. It’s a bigger base to grow off.”

The Commonwealth Bank has sought to win market share from NAB’s national dominance in the business lending market, making it a tough space to win new customers from the well-resourced rivals.

Mr Frazis said a key point of differentiation for the BoQ group is its focus on specialist businesses, where small business owners run the branches who have deep knowledge of certain industries, such as medical and health.

While he acknowledged price is “one factor” in attracting new customers, he said growing the branch network is a key pillar of BoQ’s strategy to improve the customer experience through face-to-face contact.

Evans and Partners banking analyst Matt Wilson said he was not convinced by the grow-by-acquisition approach but he supported focus on branches.

“I much prefer an organic growth option,” Mr Wilson said. “But the opportunity he has is ME Bank has no branches. So opening a few ME-branded branches in Victoria might work very well, particularly in the context of the majors closing branches.

“With mortgages … People need to eyeball someone. Zoom might be fantastic but at the end of the day, we’re all getting sick of it and we’re all social creatures.”

The takeover comes at an important juncture in BoQ’s digital transformation, that involves a five-year $440 million technology overhaul that will transfer all the group’s customers and staff onto using the one cloud-based platform.

Once complete, all three brands – BoQ, Virgin Money and ME Bank – will use the same Temenos T24 core banking system, which Mr Frazis said would allow all customers to access the bank’s 166 branches across the major cities and regional areas.

Mr Frazis said the group’s technology overhaul was a key advantage over the majors that are struggling with legacy computer systems and ageing technology that have created systemic problems with compliance.

“We’re not fixing any of our old technology. We’ve built an end to end digital bank in the cloud,” he said. “When you’re trying to fix old systems, there are always issues. It always takes longer and it always costs more.

“The major banks, because of the complexity of their business, they don’t have a choice to go with a new platform.”

However, Mr Wilson cast doubt over these ambitions in saying he believed the technology overhaul was “more complex than it appears” and the merged entity is still “a long way from being a real digital bank”.