A lot of pundits are arguing that the crisis within the Chinese property giant, China Evergrande doesn’t represent a systemic threat. The actions being taken by China’s authorities suggest otherwise.

While Evergrande’s woes might not represent a “Lehman” moment and presage a financial crisis – mainly because the absolute control the authorities have over their banking system means they can avert the kind of destructive freezing of inter-bank dealings that turned Lehman Bros’ collapse into a systemic crisis – the authorities aren’t sitting on their hands. 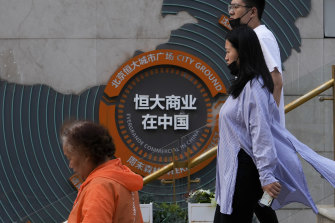 China’s authorities are preparing for the fallout of an Evergrande collapse while trying to avoid having to bail out its investors and creditors.Credit:AP

The People’s Bank of China has injected more than $US70 billion ($96 billion) of liquidity into China’s financial system in just over a week, so it self-evidently sees Evergrande as some level of threat to systemic stability.

Local government authorities have been told by the central government to put together task forces of accountants and lawyers to examine Evergrande’s operations and finances in their provinces.

They’ve also been ordered to prepare for “mass incidents” – larger-scale demonstrations by Evergrande customers, investors and suppliers than those that have already occurred.

State-owned and private sector developers are being put on notice that they might be directed to take over local projects.

The central authorities are also reported to be considering relaxing some of the restrictions on home lending and ownership and, at least temporarily, moderating the “three red lines” policy – limits to leverage and minimum liquidity ratios – that has played a major role in Evergrande’s implosion.

Evergrande may not present an absolute systemic threat but it is evident that China’s authorities believe it has some implications for systemic and social stability and are preparing for the fallout while trying to avoid having to bail out Evergrande’s investors and creditors.

It won’t surprise anyone if state-owned entities end up taking control of the group’s unfinished property assets and protecting buyers of pre-sold properties while allowing the losses for investors and financiers to flow without intervention.

Whether the measures will contain the domestic damage from an Evergrande collapse is an open question. 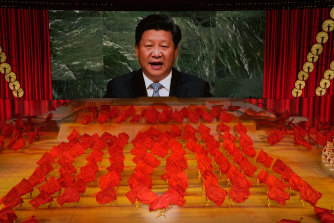 Xi’s Beijing-directed revolutionary changes to the nature of China’s model and Chinese capitalism appear well-intentioned within a communist Chinese context but its unexpectedness, pace and breadth are producing rafts of uncertainties, shocks to its system and threats to its growth and stability.Credit:AP

Property and related activity generate nearly 30 per cent of China’s GDP and account for the majority of household wealth in urban regions. Moreover, they drive activity and employment in a wide range of other sectors.

With the South China Morning Post reporting that only one of China’s 15 biggest property developers complied with the three red lines policy imposed on the sector last August, the potential for Evergrande’s troubles to evolve into a much larger threat to the economy and to social stability is real.

The three red lines policy that has precipitated the developing crisis within and without Evergrande was well-intentioned but perhaps not as thoroughly thought through as it might have been. It was designed, along with other measures like some limits on lending for housing, to help deflate a property and debt bubble.

Evergrande may not present an absolute systemic threat but it is evident that China’s authorities believe it has some implications for systemic and social stability and are preparing for the fallout while trying to avoid having to bail out Evergrande’s investors and creditors.

Earlier efforts to reduce leverage, particularly property-related leveraged, had been thwarted by the need to respond to the pandemic but the authorities obviously thought they had the pandemic under control when they resumed their crackdown last year.

They may have underestimated (or been misled by the developers, as many Chinese company accounts are opaque and unreliable) about the extent of the leverage and the vulnerability of models, like Evergrande’s, where apartments are pre-sold and most of the proceeds received before they are built and where the funding is largely short term.

Evergrande’s funding is provided by the pre-sales, wealth management products and even employees, with bank debt and bond issues a relatively modest proportion of its more than $US300 billion of liabilities. (The group, incidentally, missed a $US83.5 million interest payment on about $US2 billion offshore bonds last week and now has 30 days to avoid a default).

The focus on property and leverage was, and is, part of a much broader shift in economic management occurring within China as Xi Jinping directs a change in emphasis from “socialism with Chinese characteristics” to the new emphasis on “common prosperity.“

The policy change has been abrupt. It started with the sudden imposition of a raft of regulations and restrictions on the fintech and e-commerce sectors and has spread across the social media, gaming and education sectors, wiping out more than $US1 trillion of investors’ wealth in the process.

At the same time, citing climate change and the need to reduce pollution (particularly around the capital ahead of next year’s Winter Olympics), Beijing has been limiting steel production and coal-fired power generation.

Factories are reducing production and streetlights are being switched off.

It is a reasonable question to ask whether Xi’s desire to impose his new economic and social policy agendas ahead of next year’s Communist Party congress – where he will seek, and inevitably be given, an extension of his term as leader – has led to the authorities trying to implement too much industry-transformative change too quickly.

While property prices and the debt set against property probably represents the biggest individual threat to China’s growth and economic and social stability the combination of the property, tech, education and carbon emission agendas represents radical and dislocative change with uncertain, perhaps unknowable, implications.

Xi’s Beijing-directed revolutionary changes to the nature of China’s model and Chinese capitalism appear well-intentioned within a communist Chinese context but its unexpectedness, pace and breadth are producing rafts of uncertainties, shocks to its system and threats to its growth and stability.