Credit Suisse is like a racing car, according to the bank’s new chairman António Horta-Osório.

It is an apt analogy. The Zurich-based lender has been swerving from one disaster to the next at rapid speed and Horta-Osório, the man who restored Lloyds after the 2008 financial crisis, is trying to grab hold of the wheel. 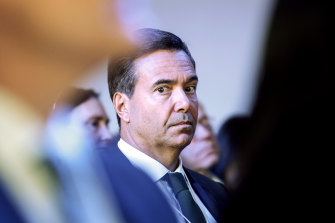 Antonio Horta-Osório has already admitted to investors that the problems facing the company are the worst he has seen in his 34-year banking career.Credit:Bloomberg

The twin implosions of the bank’s clients Greensill Capital, the finance firm advised by David Cameron, as well as US hedge fund Archegos, have left it nursing billions of dollars in losses.

The bank has now gone back into crisis mode, just as it was attempting to move on from a hugely embarrassing spying scandal that forced then CEO Tidjane Thiam’s resignation.

Horta-Osório has already admitted to investors that the problems facing the company are the worst he has seen in his 34-year banking career.

Fixing what is now Europe’s most troubled financial institution will involve hard decisions – and time is ticking for the 57-year-old to make his big move.

“During all my years as a bank CEO, I have seen a few of the highs and lows that companies experience – during the financial crisis, the Asia crisis and the problems in Brazil from 1996 to 2000. These ups and downs are normal – but the two most recent incidents at Credit Suisse go beyond that. They are not acceptable,” he told Swiss newspaper NZZ late last week.

“We are in the initial phase of the strategic repositioning of the bank. There are two things that are important to me. The first is to define our long-term direction. The other, which has to be addressed in parallel in the shorter term, is to resolve the problems that are hurting the bank.

“Or in the words of the US President Theodore Roosevelt: Keep your eyes on the stars, and your feet on the ground.”

Those who have worked closely with Horta-Osório know the level of his obsession with detail. They point out how he likes to have “a lot of control and a lot of information”, particularly when it comes to risk.

“During all my years as a bank CEO, I have seen a few of the highs and lows that companies experience – during the financial crisis, the Asia crisis and the problems in Brazil from 1996 to 2000. These ups and downs are normal – but the two most recent incidents at Credit Suisse go beyond that. They are not acceptable.”

It was at Spanish-owned lender Santander, where he was chief executive for Portugal and then the UK, where he learnt how crucial it is for those in charge to have a tight grip on risk functions.

Ex-colleagues believe that before he makes any big decisions, such as whether Credit Suisse should be broken up, merge with a rival or get swallowed up by a larger Wall Street giant, he will focus on the less headline-grabbing task of fixing risk and audit.

Swiss banks are supposed to be dull, yet at Credit Suisse there remain questions over how a 165-year-old bank in charge of the wealthiest people in the world’s savings could have ignored so many red flags. 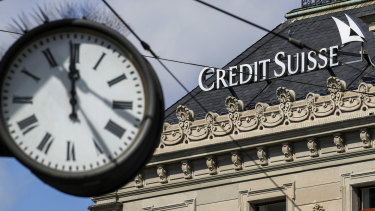 Credit Suisse has lurched from one crisis to the next.Credit:Bloomberg

“Audit and risk is part of the Santander schooling – you have a tight grip on it and you own it at the centre. So he’ll get his arms around that first,” says a senior executive who worked with the Portuguese banker at Lloyds.

“He’s also obsessed with cost income ratios, so I suspect people will be asked to look at their cost structures pretty quickly and he’ll pay for some issues to draw a line under them.

“At Lloyds he was in the weeds for the first 18 to 24 months. He’ll want to know all the details at this stage. Once he’s satisfied, he’ll step back and allow management to execute it.”

In the meantime, he won’t move alone. The bank has brought in external City consultants to help clean up its image and advise on risk management.

Sources say Horta-Osório has a close relationship with McKinsey’s global banking co-head Pedro Rodeia, who advised him when he was at Santander and Lloyds.

One ex-colleague says the McKinsey veteran will “almost certainly” be parachuted in to help Horta-Osório map out a new strategy. Both companies declined to comment on whether he has a formal role advising Credit Suisse.

Horta-Osório is also likely to turn to UniCredit’s new chief executive Andrea Orcel in times of stress, with the friends and rivals understood to text each other regularly.

When the board recently went to talk shop in Bad Ragaz, a haven in the Swiss Alps where the super-rich go to get healthy, attendees told Reuters that a formal discussion about mergers did not come up but was “the elephant in the room”.

Deal advisers will be licking their lips at the prospect of a merger involving Credit Suisse, although insiders say they will be waiting for a long time. A decision on whether to push ahead with a meaty deal is not expected to be made until at least later this year, especially as the board would rather wait and sell when the share price is at a “more reasonable level”, says one person close to the board’s thinking. Its share price has plunged by around a quarter since March.

One investment banking chief says he believes that a takeover of Credit Suisse’s wealth management business from a US giant such as Morgan Stanley is more likely to happen than a merger with arch-rival UBS – an idea that was discussed and abandoned only last year and which the banker says would be too “culturally wrong”.

Former executives have said in the past that internal politics could scupper a tie-up as both banks “are littered with people with complicated egos and long histories of working and competing together”.

“A UBS-CS merger could become a size issue for Switzerland,” JP Morgan’s Kian Abouhossein wrote in a recent report, pointing out that the current exposure of each player is 140 per cent of Swiss GDP. “Most importantly, the argument that a UBS-CS investment banking merger could offer investment banking scalability and ability to compete with US peers is a conclusion that is too late.”

One bank consultant believes a merger will not go far enough. Instead, he thinks the bank “should rip up its structure and start again”.

Aware that all eyes are on him, Horta-Osório has tried to stem the rumours by arguing that the board has only just begun discussing what to do. “In a few months, this phase will be completed and we can expect decisions to be made towards the end of the year,” he said last week.

Whatever happens, nobody is expecting him to take a back seat. “If I was an executive on the management board I’d be a little nervous at this point,” says one ex-colleague.