Clock is ticking: the walls are closing in on the $2.8tr crypto market

The rush to regulate and displace the $US2 trillion ($2.8 trillion) market in cryptocurrencies is accelerating.

A week ago China, which had been steadily cracking down on crypto activity this year, declared all cryptocurrency transactions illegal and said any company providing trading services to Chinese citizens would be deemed to be engaged in illicit activity. 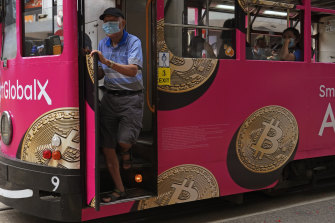 The cryptocurrency market is under a lot of regulatory and governmental pressure.Credit:AP

In the US, Securities and Exchange Commission chairman Gary Gensler wants the power to regulate crypto assets as securities, arguing that the sector is rife with fraud, scams and abuses.

Late last month the Biden administration nominated Saule Omarova, who has been fiercely critical of crypto assets and advocates their regulation, to head the Office of the Comptroller of the Currency.

Later this month the US Treasury department is expected to issue a report on stablecoins that recommends their issuers should be regulated like banks.

China, which is well down the tracks of issuing a digital yuan – it has been engaged in an advanced pilot program – had previously banned crypto mining, which is extremely energy-intensive.

Its toughening stance probably relates to its plans for its own digital currency – it is eliminating the competition – but also to its tightening regulation of digital finance and control and oversight of its citizens’ financial data.

The US appears more concerned about the implications of cryptocurrencies for financial stability and consumer protection than in emulating China’s attempt to wipe out digital currencies.

The recent hacking of Coinbase, one of the largest digital assets exchanges, which resulted in the cryptocurrencies of more than 6000 customers stolen, can only add momentum to Gensler’s efforts to gain regulatory authority over the sector to protect consumers.

It seems a foregone conclusion that the major central banks and financial regulators will move to neutralise the threats to their own position and the stability of their systems by issuing their own digital currencies while forcing the digital challengers into the regulated financial system.

The primary concern of the Fed and US Treasury, however, appears to be the potential threat stablecoins, in particular, might pose to the stability of the financial system.

Cryptocurrencies like bitcoin are so volatile that they make poor mediums of exchange and therefore don’t represent much of a threat to central-bank issued currencies, whether physical or virtual.

Stablecoins – tokens backed by baskets of physical assets, or tied to reserves of US dollars – could be much more of a threat to central-bank issued currencies, even if they only represent about $US125 billion of the $US2 trillion crypto asset market today.

The US authorities would be particularly mindful that the Facebook-sponsored Diem (formerly Libra) consortium hasn’t abandoned its cryptocurrency plans.

Its ambition of creating a global network for digital payments has evolved – the initial plan for Diem tokens to be backed by a basket of multi-currency assets has been replaced by a peg to the US dollar – but hasn’t been abandoned despite significant international regulatory opposition.

The US focus on stablecoins is driven by the theoretical stability of the value of the digital tokens, which would make them a far more viable alternative to central bank-issued currencies than Bitcoin.

The backing of the tokens with real financial assets, however, would also introduce vulnerabilities that bank regulators are very familiar with.

Banks and other regulated financial institutions are required to hold capital and minimum levels of high-quality liquid assets to protect against “runs” by their depositors and lenders. 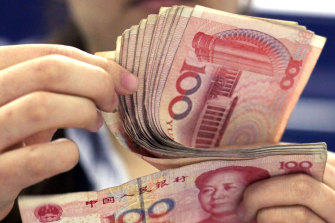 China is well down the track of issuing a digital yuan program.Credit:AP

It is apparent that the US regulators are contemplating imposing similar regulations on sponsors of stablecoins to protect investors and level the playing field for regulated institutions. Some stablecoin promoters have been seeking to offer bank-like financial products.

The response from authorities’ to the increased acceptance of cryptocurrencies as an investment class and the ambitions of some, most threateningly Facebook, to leverage their vast consumer bases and infrastructure to disrupt physical currencies and existing payments systems, is developing into something of a pincer strategy.It is apparent that governments will regulate crypto assets, albeit perhaps not as draconically as China. It is also almost inevitable that China won’t be the only major economy to issue its own digital currency.

The UK set up a taskforce earlier this year to explore the potential for a “Britcoin,” the US has had the Boston Fed and the Massachusetts Institute of Technology researching a digital dollar for more than a year and the BIS has commissioned and published ever more detailed and granular research from its member central banks (including the Reserve Bank) into central bank-issued digital currencies.

It’s not just the perceived threats to financial stability and consumers, or even the challenge to existing currencies and central banks’ authority over monetary policy, that is motivating the efforts.

Where the promoters of crypto assets today see themselves as disrupters of the establishment, the establishment sees digital currencies and the blockchain technologies that underpin them as a pathway to a more efficient, innovative and inclusive financial system.

Western governments are likely to be more concerned about privacy issues than China but, even so, central bank-issued digital currencies are likely to give the banks and their governments greater control over their financial systems, not less.

The design of these systems – the role of existing institutions and the extent to which privately-issued crypto assets should be allowed to exist and, if they are allowed, how they are regulated – will be important.

It seems, however, a foregone conclusion that the major central banks and financial regulators will move to neutralise the threats to their own position and the stability of their systems by issuing their own digital currencies while forcing the digital challengers into the regulated financial system. Both strands of that response are now being accelerated with increasing urgency.