New York (CNN Business)Shares of Alibaba, the Chinese e-commerce giant, fell Wednesday on slowing sales growth and concerns about a delay in the initial public offering of financial tech firm Ant Group, one of its top investment holdings.

Alibaba (BABA) reported third-quarter earnings Wednesday that easily topped estimates, as well as revenue growth that was roughly in line with forecasts. But that 30% sales growth was below the 34% rate in the second quarter. Shares fell about 4% in early trading but are still up more than 35% this year.
Still, Thursday’s drop follows significant losses on Tuesday, when Alibaba’s stock plunged 8% after Chinese regulators suspended the planned IPO of Ant Group, a financial tech powerhouse founded by Alibaba co-founder Jack Ma, citing “major issues” that might cause the company “not to meet the listing conditions or disclosure requirements.” Alibaba owns a third of Ant Group.

The IPO was expected to be the biggest ever in the world, raising $37 billion through a listing of shares on both the Shanghai and Hong Kong stock exchanges. 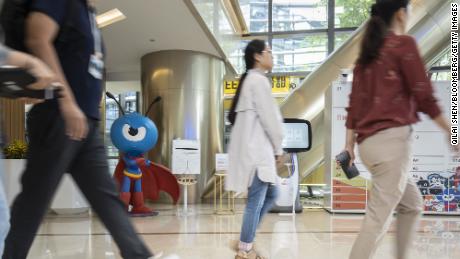 During a conference call with analysts Thursday morning, Alibaba CEO Daniel Zhang said the company is “actively evaluating the impact” of proposed regulatory changes to the fintech world in China “and will take appropriate measures accordingly.”

But no matter what happens with Ant Group, Alibaba is still benefiting from the rebound in the Chinese economy following the coronavirus outbreak that emerged there late last year.
The company reported solid growth in e-commerce revenue, as well as a healthy jump in both overall customers and mobile active users for its Taobao and Tmall sites and apps.

“Our domestic core commerce business continued to grow steadily during the post-COVID-19 environment in China through higher purchase frequency and consumer spending,” said Alibaba CFO Maggie Wu in a statement.
Tmall’s apparel sales growth rates even exceeded pre-coronavirus levels, the company said.
Meanwhile, Alibaba is also busy prepping for its annual November 11 online shopping extravaganza, which is similar to a combination of America’s Black Friday, Cyber Monday and Amazon Prime Day deals.
Alibaba said it expects more than 250,000 brands to participate in its Singles Day event and that two million new products will debut during it.
The company also continues to post strong gains in its cloud computing unit, which competes with Amazon (AMZN), Microsoft (MSFT) and Google (GOOG) owner Alphabet. Alibaba Cloud sales jumped 60% from a year ago.

On the political side, Alibaba did not address the outcome of the US presidential election in the earnings release or early part of the conference call. Some analysts have expressed hopes that if Joe Biden is ultimately declared the winner and becomes the next president, he might look to restore more normal trade relations with China and other nations.
But Zhang simply noted during the conference call that Alibaba’s “businesses related to international markets continued to enjoy rapid growth” and did not mention America specifically.
Source: Read Full Article