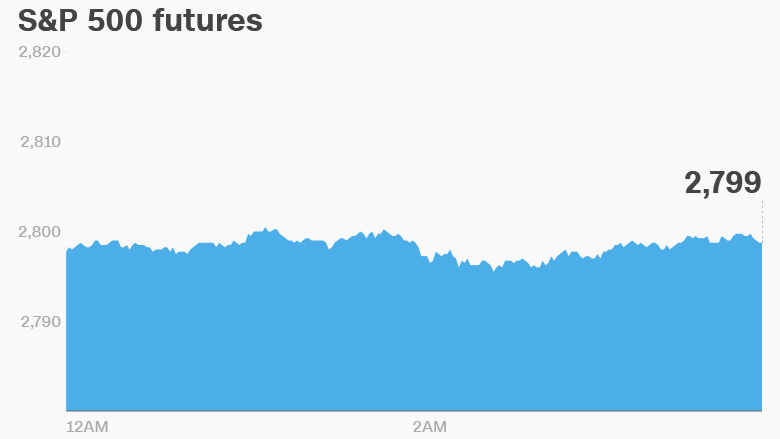 1. Earnings bonanza: The earnings season is in full swing.

Things kick off before the bell Monday with Barbie-maker Hasbro (HAS) and oilfield services firm Halliburton (HAL). Google parent company Alphabet (GOOGL), Whirlpool (WHR) and TD Ameritrade (AMTD) will follow after the close.

Most European markets dipped in early trading, with main indexes in Britain and France off 0.5%.

Asian markets ended the day with mixed results. The Nikkei in Japan dropped 1.3% while the Shanghai Composite surged 1.1%.

US market moves were muted last week. The Dow Jones industrial average gained 0.2%, while the S&P 500 was flat and the Nasdaq dropped 0.1%.

Shares in Fiat Chrysler (FCAU) (FCA) were down 3% in Milan after the automaker announced the sudden resignation of Sergio Marchionne on Saturday after the longtime CEO suffered complications from surgery.

Replacing him will be the former boss of the automaker’s Ram and Jeep brands, Mike Manley.

The company said in a statement that “unexpected complications arose while Mr. Marchionne was recovering from surgery and that these have worsened significantly in recent hours.”

Marchionne, 66, will also leave his roles as chairman and chief executive at Ferrari (RACE), which was spun off from FCA (FCAU) several years ago. The luxury carmaker said Louis Camilleri, a Ferrari board member and chairman of Philip Morris International Inc., will become CEO.

4. Watching Iran: US President Donald Trump has warned on Twitter that Iran could “suffer consequences the likes of which few have ever suffered before.”

Despite the dramatic rhetoric, US crude oil futures were little changed at $68.50 per barrel.

The United States is preparing to reimpose harsh sanctions on Iran that threaten its oil exports after the Trump administration pulled out of a nuclear deal with the country.

5. Transatlantic transactions: Shares in French IT services firm Atos (AEXAY) slipped 5% in Paris after the company announced a plan to buy the US-based firm Syntel (SYNT) for $3.4 billion in cash.