London (CNN Business)Federal Reserve Chair Jerome Powell has made it very clear that unlike some investors, he’s not stressed out about a potential rise in inflation later this year. And there’s good reason for that: he’s busy worrying about jobs.

What’s happening: The US economy is still down 9.5 million positions since February 2020, putting huge pressure on the central bank to keep stimulus coming for the foreseeable future. Expect Powell to hit this point hard when the Fed announces its latest policy decision this week.
The central bank is tasked with maintaining both stable prices and maximum employment. Last summer, it tweaked its strategy, indicating that policymakers would allow inflation to climb above its 2% target if necessary.

That gives the Fed a lot more leeway to keep interest rates lower for longer — and that’s what many economists expect it to do.

“They’ve said they’re willing to be patient,” Joseph Brusuelas, chief economist at RSM US, told me.

The passage of President Joe Biden’s $1.9 trillion relief package could help. Airlines said last week that they were canceling furloughs, and supplementary unemployment benefits and stimulus checks are expected to boost demand, supporting employment in struggling industries.
Some experts, including former Treasury Secretary Larry Summers, have warned that the package could send prices higher. But Brusuelas thinks there’s just too much slack in the labor market for sustained inflation to materialize — especially given how much one-time spending the bill contains.
“It’s simply not going to happen on the back of this particular legislation,” he said.
The package won’t eliminate economic scarring. Many jobs in the hospitality, entertainment and retail sectors won’t ever return. Researchers at Harvard University have found that the number of small businesses open is still down 32% compared to January 2020. The Economic Policy Institute, looking at the latest report on job openings from the Bureau of Labor Statistics, notes that for every 15 unemployed workers, there were only available jobs for 10 of them.
“That bartender is going to have to learn how to code. That waitress is going to have to become digitally literate, because their jobs are likely not going to be there in the early post-pandemic economy,” Brusuelas said.
Solving this problem may be left up to Congress and the Biden administration, given the limited tools at the Fed’s disposal. Treasury Secretary Janet Yellen has said there will be another bill that “addresses job creation through infrastructure development [and] through investment in people, in education and training.”
In the meantime, lawmakers will need the Fed to keep providing support — even if inflation concerns pop up again in financial markets.

Why small grocery stores are (still) out of toilet paper 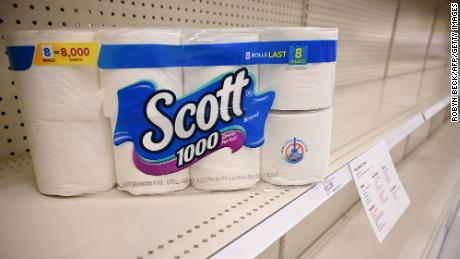 Small grocers say there’s a reason their shelves are still relatively bare, my CNN Business colleague Nathaniel Meyersohn reports. Major suppliers of consumer products, faced with limited supply and high demand, are prioritizing their biggest retail customers like Walmart (WMT) and Amazon (AMZN), according to the trade group representing independent grocery stores in the United States.
Without access to key products, small grocers say, they’re losing out on customers and facing yet another hurdle as they try to survive against big chains.
It’s not an entirely new problem. Before the pandemic, independent grocers were often told they could not get products or particular items available at big chains, according to Christopher Jones, senior vice president of government relations and counsel at the National Grocers Association.
“What’s happened during the Covid pandemic is really this issue has been magnified,” Jones said.
There’s no publicly available data tracking out-of-stock products at small versus big stores. But Burt Flickinger, a supermarket consultant at Strategic Resource Group, said he and his team visit stores around the country every week, and they have found in the pandemic that chain stores “by far” have better supply than independent stores.