For restaurants, the economic recovery is 'moving in reverse'

London (CNN Business)Six weeks ago, the Federal Reserve was sending signals that it was time to start backing away from crisis-era support for the US economy.

“It’s not clear to me that we’re really doing anything useful here,” St. Louis Federal Reserve Bank President James Bullard said on Aug. 10 of the Fed’s $120 billion in monthly bond purchases.
Dallas Fed President Robert Kaplan agreed. “What I don’t want to do is keeping running at this speed for too long, and then we’re going to have to take more aggressive action down the road,” he told CNBC around the same time. 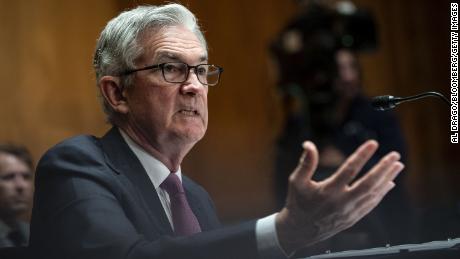 But the picture has changed since then, and when the Fed makes its latest policy announcement on Wednesday, it’s expected to reiterate that for now, at least, it’s sitting tight.

“A no change decision at the upcoming [Fed] meeting looks a foregone conclusion,” ING strategists wrote in a recent note to clients, pointing to Chair Jerome Powell’s remarks at the Jackson Hole symposium last month, which indicated that the central bank is not in a rush to change course.

Breaking it down: Inflation is still running hot. The Personal Consumption Expenditures Price Index, the Fed’s favorite measure, rose at a rate of 4.2% in the year ended July, the fastest pace since January 1991. That’s more than double the central bank’s 2% target.
This month, a number of companies have revised down their earnings expectations as a result of higher prices. PPG (PPG), which makes paints and coatings, said third quarter sales volumes would be $225 million to $275 million lower, citing supply chain problems and raw material inflation. Competitor Sherwin-Williams (SHW) made a similar announcement.
Some economic data also indicates the US economy is powering through the impact of the Delta variant. Counter to expectations, US retail sales increased last month as consumers shelled out on clothing, furniture and groceries.
Taken together, inflation readings and signs of economic resilience should be encouraging the Fed to act sooner rather than later. But Wall Street now thinks the central bank will make this call in November, with the tapering of bond purchases starting by near end.
Why? Simply because the situation remains murky. In August, spending at restaurants was flat month-over-month, indicating Delta concerns are having some effect on consumers. And the most recent US jobs report showed that just 235,000 positions were added in August, a major disappointment.
“Ultimately, the determination of the decision on tapering likely comes down to the pace of labor market improvement over coming months,” Ellen Zentner, Morgan Stanley’s chief US economist, said in a research note. She thinks the Fed will delay a tapering announcement until December so it can parse more jobs data.
Watch this space: With agreement that the Fed is on hold for the time being, the most market-sensitive moment of Wednesday’s announcement is likely to be the release of the central bank’s latest economic forecasts, as well as its “dot plot,” which tracks expectations for when interest rate hikes will kick in.
In the last update, seven out of 18 Fed officials said rate increases would likely start in 2022. ING thinks it’s conceivable that “one or two more bring their forecast forward” to next year. “We suspect the median stays at 2023 for now, but it will be a close call,” the bank predicts.

China’s Evergrande Group will pay interest due Thursday on one of its bonds, but it’s keeping rattled investors guessing about the fate of a second, bigger payment due this week.
The latest: The troubled Chinese real estate conglomerate said Wednesday in a filing with the Shenzhen Stock Exchange that issues regarding a payment on a domestic yuan bond have been “settled through negotiations.” 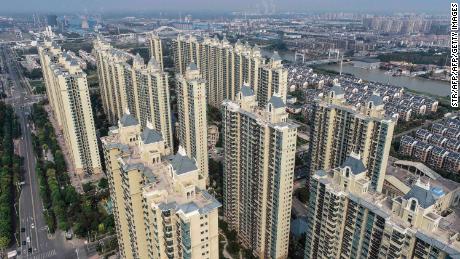 Many questions remain unanswered, though, my CNN Business colleague Laura He reports. Evergrande did not elaborate on the terms of the payment. The amount of interest it owes on the bond is about 232 million yuan ($36 million), according to data from Refinitiv.
Interest worth $83.5 million on a dollar-denominated bond is also due Thursday, though the company has not said anything publicly about what will happen with that payment.
Remember: Evergrande is stumbling under $300 billion worth of liabilities, which are widely held by Chinese financial institutions, retail investors, home buyers and suppliers in construction, materials and design industries. Foreign investors also hold some of its debt.
In the last few weeks, the company warned investors twice that it could default if it’s unable to raise money quickly.
It’s not clear whether the company will actually default, or whether Beijing will intervene and orchestrate some other type of restructuring. But the company’s failure would likely create aftershocks that could ripple through the financial market and the broader Chinese economy.
“There appears to be an acceptance that an Evergrande failure is more a matter of when and not if, and the real question is how any fallout is managed,” Michael Hewson, chief market analyst at CMC Markets, said in a report Wednesday.

The debt debate is heading for a Senate showdown

The House of Representatives voted Tuesday to pass legislation to prevent a government shutdown at the end of the month and suspend the nation’s borrowing limit. Now comes phase two: a showdown with Republicans who insist Democrats should act alone to stave off a looming debt crisis.
The backstory: Government funding is set to expire on Sept. 30. The bill the House approved would extend funding and keep the government open through Dec. 3, while shelving the country’s debt limit until December 2022. But the bill now faces an uphill battle in the Senate.
Treasury Secretary Janet Yellen has warned of dire consequences if the debt ceiling isn’t raised, barring the government from paying its bills as soon as next month.
“The US has never defaulted. Not once,” she wrote in an op-ed in the Wall Street Journal published Sunday. “Doing so would likely precipitate a historic financial crisis that would compound the damage of the continuing public health emergency.”
Goldman Sachs observed that “investors are growing concerned about market spillovers” from a political standoff in a note to clients on Tuesday. Yet the data indicates those fears may be overblown.
“History shows that US government shutdowns generally have not meaningfully impacted equity returns,” the investment bank said.
Still, a possible debt crisis is far from the only issue provoking “extreme fear” on Wall Street, according to the CNN Business Fear & Greed Index. Combined with the situation surrounding Evergrande and uncertainty about the economy and the path of central bank action, the debt debate could trigger more volatility than usual in the days to come.