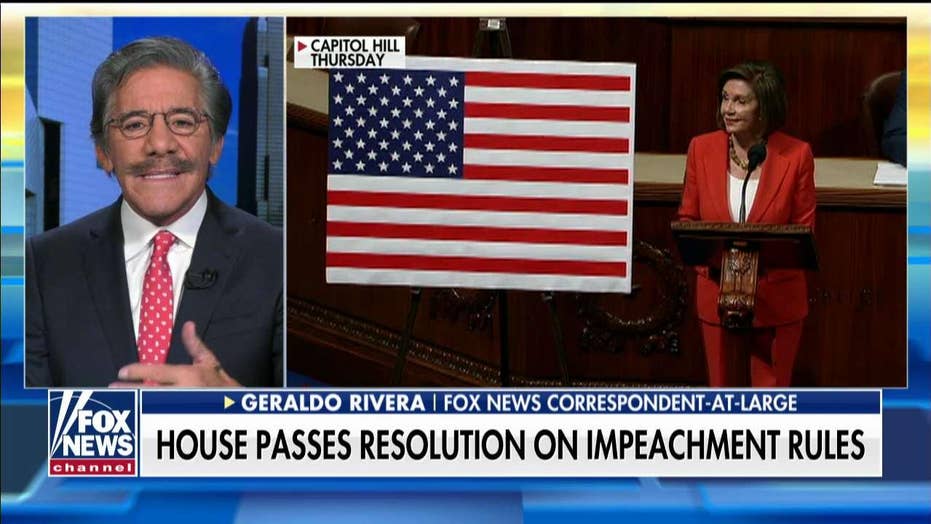 The impeachment inquiry by House Democrats against President Trump is "grotesquely unfair and divisive," Fox News correspondent-at-large Geraldo Rivera said Friday, warning that it will lead to unprecedented political division in the country.

"The Speaker of the House, the Democrats have crafted an impeachment which is inherently divisive and made it so very unfair as to enrage Republicans and other fair-minded people," said Rivera on "Fox & Friends."

"It is so deeply and fundamentally unfair, I predict it will lead to the kind of Tea Party uprising we saw in 2009 and 2010. It will divide this country along partisan lines in a way we have heretofore never seen and I do not believe it will result in justice."

The House voted largely along party lines on Thursday to approve guidelines for the impeachment process going forward, a month after launching it. But Republicans alleged those leading the charge have been looking to impeach all along. And they drew close attention to Nancy Pelosi’s March warning — especially considering Pelosi even cast a rare vote on the resolution itself, voting for it.

Republicans argued that while she said in March any impeachment push should be bipartisan, the only bipartisan vote Thursday was to oppose the resolution, as two Democrats broke ranks in opposition. No Republicans supported it.

Rivera noted that the New York Times' Friday story about the vote called it a "fractured House" and a "bitter vote."

Speaking on "The Late Show" Thursday, Pelosi said "No one is above the law" and that House Democrats "do not want to impeach a president." Pelosi argued that Trump's call to the president of Ukraine — in which he was accused of withholding military aid in exchange for an investigation of the Biden family — could not be ignored.

Rivera said Trump deserves "due process" and fairness like any other American, but Democrats have wanted to impeach him since the moment he took office. He said the ensuing months will be a "big mess" as public hearings are held in advance of Democrats eventually voting to approve articles of impeachment.