Investor protections in loan documents are deteriorating and global regulators are taking notice.

Amid this stepped-up scrutiny, research service Covenant Review has been sounding the alarm on covenants in loans issued to debt-laden companies since the 2008 recession.

Financial watchdogs say the deterioration in covenants required by lenders could result in steep losses for investors during an economic downturn and potentially lead to instability in the U.S. financial system.

“From the lenders’ perspective, it’s been a constant grind downward,” said Steven Miller, CEO for Covenant Review, in an interview with MarketWatch.

With a 20-person team of casually dressed lawyers, Covenant Review sifts through stacks of paper in the 10th floor of a Manhattan Midtown office, helping overwhelmed asset managers and investors see if loan covenants are watertight or watered down.

Covenants can come in all shapes and sizes. Sometimes they serve as an early detection system for a company’s deteriorating finances or a guardrail to prevent companies from diverting too much of their cash flow to dividend payments to shareholders. 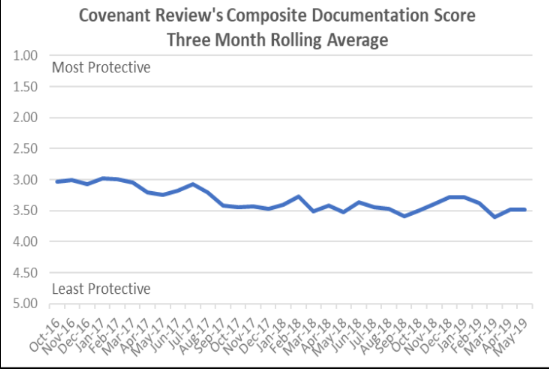 The lack of such protections in corporate debt documents has led the Federal Reserve and the Financial Stability Board to launch inquiries into the $1.2 trillion U.S. leveraged loan market.

A leveraged loan is one extended to a company that already has considerable amounts of debt or a poor credit history.

Leveraged loans are packaged and sold to investors in the form of collateralized loan obligations. The securitization of loans to debt-laden companies has also invited comparisons with the packaging of subprime mortgages in collaterized debt obligations which led to the financial crisis of 2008 and the collapse of hallowed investment banks and financial institutions across Wall Street.

The growing spotlight on leveraged loans, not just in the U.S. and the U.K. but even among Japanese financial regulators, has benefited Covenant Review as investors in loans are under pressure to show they have done their homework on the risks in their portfolio’s assets, said Miller.

Yet even as someone who has helped keep investors abreast of the deterioration of covenants, Miller said leveraged loans bear few similarities with the subprime lending boom, casting doubt on the notion that the sector poses a systemic financial risk, even if it leads to losses for investors during the next credit downturn.

“I don’t know if it’s going to have a devastating effect during the next cycle, time will tell. But if you look at the loan market today versus where it was in the mid-2000s, the thing that is significantly different is the strength of the documents,” said Miller, who has studied the loan market for close to three decades mostly as a financial journalist.

In other respects, credit booms in decades past were much the same as now, he said.

For example, the financial profile of firms selling leveraged loans was comparable to previous credit booms during the leveraged buyout frenzy in the 1980s, the dot-com bubble of the late 1990s, and the financial crisis in 2008. Miller also said the same private-equity firms including KKR and Carlyle, who underwrote loans several decades ago, were still key players in the market.

Miller also pointed out that banks no longer acted as financial warehouses that would temporarily store such securities in their balance sheets before they passed them onto the final buyers, meaning leveraged loans pose less systemic risk in the banking system..

Yet even key market participants have issued warnings about the sector.

Moynihan’s remarks were viewed as particularly concerning because BAML has been a leading underwriter for leveraged loans over the past decade.

“It’s hard to know exactly how much financial risk is in this market, but it’s definitely enough that regulators, bankers and professors are worried about it, ” said Erik Gerding, a professor at Colorado Law School, who appeared in a recent Congressional hearing on leveraged lending.

Read: Here’s why the Fed and global regulators are ringing the alarm over leveraged loans and CLOs

The boom in leveraged loans has been driven by the insatiable hunger for higher returns in an era of low interest rates but Covenant Review has had several successes in allowing investors to push back against underwriters trying to water down the quality of loan covenants.

For example, Miller pointed to how attention was drawn to the move in 2016 by the retailer J.Crew to transfer its intellectual property to another entity which could have taken away the collateral underpinning the value of the clothing maker. As a result such back door provisions were less likely to appear in future debt documents.

Market participants have also shown interest in Covenant Review’s initiative to quantify the strength of covenants with a scoring system, launched at the start of the year, to make it easier for investors to compare them across different deals much like credit ratings. Its main competitor Xtract Research also created a similar scoring system in April.

The hope among market participants is that a covenant scoring system will lead prices for leveraged loans to more accurately reflect which ones carry looser safeguards and which carry more watertight ones.

“That would be a system that would ensure better pricing,” said Martin Fridson, chief investment officer of Lehmann, Livian, Fridson and a veteran of the leveraged lending market.

But so long as money keeps flowing into loan funds for yield, little is likely to change.

“The reality is if you’re a loan fund and you have a sudden inflow of a $100 million, you’re going to have to put that money to work. You don’t have the luxury of passing on a deal,” Fridson said.

-Joy Wiltermuth contributed to this article