The U.S. 10-year Treasury yield looks set to spring higher, taking mortgages and consumer loan rates with it, after spending the past month in a rut.

President Donald Trump’s criticism of the Fed’s interest rate policies in an interview with CNBC was part of the catalyst, since traders said the Federal Reserve would now be sure to stay on its rate hiking path to prove its independence. That helped push up yields which move opposite bond prices.

The 10-year yield, between 2.8 and 2.9 percent for more than a month, had first jumped to life Friday after reports that the Bank of Japan was considering changing its easy money policies that have held Japanese government bond yields near zero and depressed global rates.

The 10-year yield shot to 2.965 percent Monday, rising from a low of 2.87, nearly equal to the maximum move in the last four weeks. 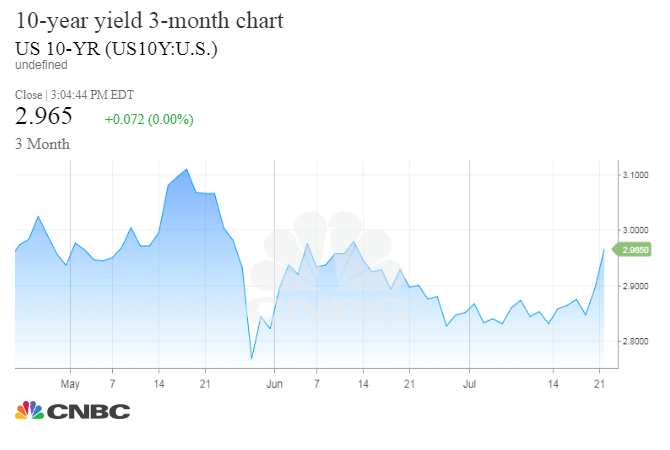 “The 10-year could go 3 percent on this move. There seems to be a momentum that has brought out sideline players, anxious to sell the market,” said Ian Lyngen, U.S. rate strategist at BMO. Lyngen said the lack of volatility signaled the 10-year had been coiled for a breakout, after spending 20 sessions in a 9.8 basis point range, an extremely rare event.

The report on the Bank of Japan continued to roil the markets Monday, and overnight the 10-year Japanese government bond jumped by 5 basis points, to 0.083 percent, the highest since February. The BOJ, which meets next week, announced it would buy bonds to curb the action, and the 40-year JGB also spiked, touching 0.92 percent.

“What drove the story Friday and the move in bonds overnight is finally the realization on the part of the BOJ that they’ve dramatically impaired the profitability of its banking system that has no yield curve to play with along with negative interest rates. Thus, allowing some steepening in the yield curve is for the sole purpose of helping banks instead of a declaration of victory with their inflation goals,” wrote Peter Boockvar, chief investment strategist at Bleakely Financial Group.

Lyngen said the last time that 10-year yield was at 3 percent was June 13, the day of the last FOMC meeting when the Fed raised interest rates by 25 basis points. It was at the year high of 3.12 percent on May 18. As the 10-year rose, the spread between 10-year yields and 2-year yields also widened to 34 basis points. The spread, or yield curve, has been watched closely by traders because it was flattening, a possible warning of economic trouble.

“It’s really a reaction to the BOJ story,” said John Briggs, head of stategy at NatWest Markets. “Any expectation around changes in monetary policy that are hawish could really drive yields,” he said.

“I think [Trump] harping on the Fed didn’t help the long end. They [Fed officials] need to keep going to prove they are not influenced by politics,” he said.

The Fed meets next week, but it is expected to keep interest rates unchanged. Its next rate hike is expected in September.