There are echoes of a familiar and not-so-distant past in the litany of woes and losses that have engulfed Credit Suisse this year.

The $US4.7 billion ($6.1 billion) of losses from its exposure to the implosion of hedge fund Archegos Capital; the multi-billion exposures of the bank and, more particularly, its clients to the abrupt demise of Greensill Capital and its related exposures to the Greensill-funded steel empire of Sanjeev Gupta are the latest in a series of embarrassing misadventures over the past year.

The clients within the $US10 billion supply chain finance funds that financed Lex Greensill’s dramatic rise now face losses of $US3 billion, or more, from his traumatic fall.

Last year Credit Suisse was entangled in alleged frauds at Chinese coffee chain Luckin Coffee and German payments company Wirecard and revealed it could face losses of up to $US680 million from litigation over its US sub-prime mortgage dealings during the lead-up to the 2008 financial crisis. 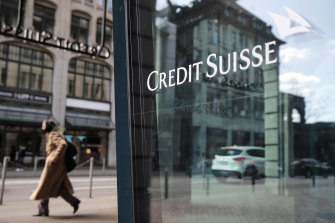 Credit Suisse could perhaps have avoided its scandals and losses of the past year had it learned from history.Credit:Bloomberg

The obvious conclusion to draw from this series of embarrassing and large-scale failures of judgement is that Credit Suisse — a Swiss institution founded in 1856 and with a history of relative conservatism – has been reckless and that its management of risk has been abysmal.

That conclusion is supported by the dumping of a host of senior managers earlier this month, including its chief risk and compliance officer and the head of its investment bank.

Credit Suisse had been having a good pandemic until the Greensill and Archegos debacles emerged. Its shares had risen about 90 per cent from their pandemic-driven lows last March. Yet since the start of last month the share price has almost halved, wiping about $14 billion off its market capitalisation.

By contrast, its fellow Swiss banking giant, UBS, has seen its share price soar over the past year, adding more than $30 billion to its market capitalisation. It’s now valued at about $78 billion against Credit Suisse’s $32 billion, nearly doubling the $20 billion gap between their relative valuations last March.

It’s interesting to ponder whether a UBS return on equity almost twice that of Credit Suisse’s played a role in the misconceived strategies and the misjudgments the smaller Swiss bank made.

Credit Suisse could perhaps have avoided the scandals and losses it has experienced over the past year had it learned from history that it should have been very familiar with, given its geographic proximity to UBS.

The enlarged and aggressive UBS then acquired Paine Webber, a big US investment bank and brokerage, in 2000 and set out to challenge the big Wall Street banks that dominate investment banking. That ambition nearly destroyed UBS, which had to be bailed out by the Swiss National Bank after the 2008 financial crisis.

A lengthy report to shareholders in 2008 explained how its $US40 billion of subprime-related losses had occurred.

There was a long and detailed list of its mistakes, but the core of the explanation was the focus on size and revenue and a lack of focus on risk and reward.

Essentially, in setting out to achieve its objective of becoming the biggest player on Wall Street, UBS gave its investment banking unit an unfettered mandate to chase growth.

Moreover, it did so without building recognition of the higher risks in investment banking relative to its traditional banking activities into its strategy.

It essentially provided the investment bankers with a blank cheque written against the low-cost customer deposits in its retail funding base—and big individual financial incentives — to use that access to cheap funding to buy its way into big market shares in subprime lending and securities trading.

It’s no wonder that ended badly.

From what Credit Suisse has disclosed about its spate of financial disasters, something eerily similar occurred within UBS’s Swiss rival. In some respects – to borrow from Shirley Bassey – “it’s all just a little bit of history repeating”.

Risk, and its concentration within the Greensill-Gupta relationships, seems to have been relegated behind reward as the bank chased revenue and profits, with Credit Suisse’s risk-management function streamlined and reoriented in recent years to be more commercially-minded.

Perhaps the secret ingredient in Macquarie Group’s success has been the separation and independence of its risk-management function, which has an arm’s-length and quasi-adversarial relationship with the group’s commercial activities.

For investment banks, which routinely engage in relatively high-risk activities, a robust risk and compliance department that can reject proposals and is supported by senior management is critical.

Self-evidently that doesn’t appear to have been the case at Credit Suisse — one of the few major banks that got through the financial crisis with scrapes rather than scars — even though it had a relatively recent template for avoiding disasters, nicely documented and issued by a compatriot only a few hundred metres away from its own Zurich headquarters.

Perhaps Credit Suisse’s risk-management failures reflect something broader. It wasn’t, for instance, the only major bank to get caught up in the Archegos collapse.

Nomura lost about $US2 billion and others – JP Morgan, Goldman Sachs and Morgan Stanley among them – only escaped relatively unscathed because of the speed at which they dumped their exposures (increasing the losses for Credit Suisse and Nomura in the process) when it became evident that a cascade of margin calls on Archegos’ derivative exposures threatened its existence.

Archegos, a “family office” hedge fund, is said to have been provided with $US50 billion of credit from Wall Street institutions for its concentrated exposure to a handful of listed companies.

In a world where risk is seen to have been eradicated by the post-crisis monetary policies of the central banks, or at least one in which the risk has been transferred away from investors and institutions to those central banks and where asset prices are therefore seemingly set to rise almost in perpetuity, why prioritise risk management?