JPMorgan Chase CEO Jamie Dimon said the U.S. economy is headed for a boom that could run well into 2023.

In his annual letter to shareholders Wednesday, Dimon said robust consumer savings, a successful vaccine rollout and the Biden administration’s proposed $2 trillion infrastructure plan could lead to an economic “Goldilocks scenario” of fast and sustained growth, tame inflation and a measured rise in interest rates.

“I have little doubt that with excess savings, new stimulus savings, huge deficit spending, more QE [quantitative easing], a new potential infrastructure bill, a successful vaccine and euphoria around the end of the pandemic, the U.S. economy will likely boom,” Dimon said. “This boom could easily run into 2023 because all the spending could extend well into 2023.”

Biden’s $2 trillion infrastructure plan: It would lift economy but higher taxes may hamper growth until projects roll out

In his 65-page letter, Dimon said the long-term effects of the economic boom won’t be known for years because it will likely take time to see how government spending, including President Biden’s proposed $2 trillion infrastructure bill, will boost economic growth.

The infrastructure plan, dubbed the American Jobs Plan, aims to rebuild the nation’s aging roads, bridges, transit and rail service, along with supporting electric vehicles, clean energy and building more than 2 million affordable homes. The White House said it would like to see the plan approved by Congress in the summer.

“The permanent effect of this boom will be fully known only when we see the quality, effectiveness and sustainability of the infrastructure and other government investments,” Dimon added. “I hope there is extraordinary discipline on how all of this money is spent. Spent wisely, it will create more economic opportunity for everyone.”

To be sure, a number of challenges could thwart the boom, Dimon said, including the risk of new COVID-19 variants and rising debt levels. A faster-than-expected rise in inflation could also lead the Federal Reserve to raise interest rates more quickly than Wall Street is expecting, which would threaten to weigh on economic growth. 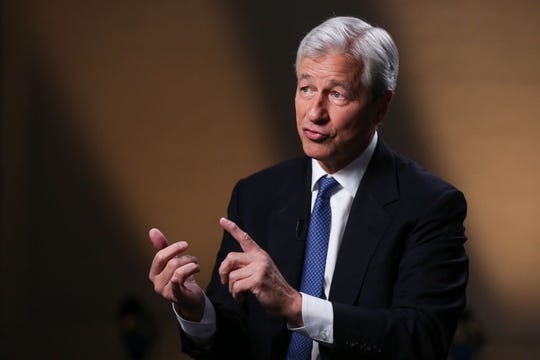