Dozens of car crashes littered slippery roads in the Los Angeles area Thursday evening as a rare Southern California downpour lead to flooding and mudslides in the region.

Los Angles, Riverside, Orange and San Bernardino counties were all under flash flood watches as of Thursday evening, according to the National Weather Service, which said it could rain more than three-quarters of an inch per hour.

“50+ crashes on LA freeways? Our partners over at the CHP are in for a long night. Please SLOW DOWN!” the Los Angeles Police Department tweeted in response to a report from KCAL9-TV helicopter reporter Desmond Shaw.

Shaw reported the California Highway Patrol had to temporarily stop all southbound lanes on a section of Insterstate 5 after one crash. 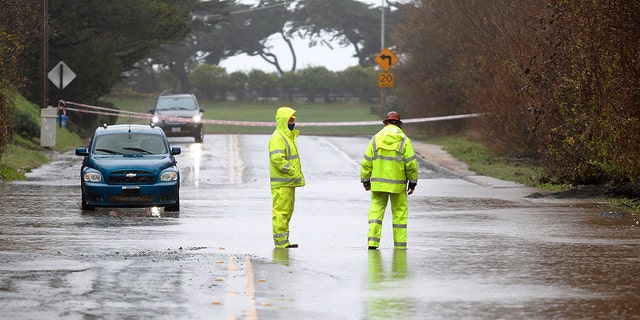 Police advised drivers to stay off the roads if possible.

The rain is expected to continue into Friday with the chance of a thunderstorm.

Friday is also the first day that restaurants in Los Angeles will be allowed to offer outdoor dining after two months of delivery and takeout only.

Sandra Cordero of Woodland Hills’ Gasolina Café told The Hollywood reporter the rain is already complicating a difficult situation for their restaurant. “Re-re-re-re-opening a restaurant is not as easy as flipping a light switch,” she said. “There are a lot of spokes to make the wheel turn. Ordering, staffing, menu planning and executing, there’s rain and cold weather. There’s kids that are still not back in school. I’m not excited, I’m exhausted!”

Because of the rain, some restaurants plan to wait until Saturday to reopen.

Small mudslides were reported in some parts of Orange County south of Los Angeles, Thursday evening, according to FOX 11 in Los Angeles.

A FOX 11 team witnessed one mudslide while reporting on the storm.

“This mudflow that happened in front of us in Silverado Canyon is beginning to swallow up the front of a home,” FOX 11 reporter Bill Melugin reported. “We’re told the residents evacuated. Sheriffs Department now on scene.”

He added that the team is trapped because of multiple mudslides but they are safe.

A winter storm warning was issued for the area’s mountains with up to two inches of snow expected above 6,000 feet and wind gusts up to 55 mph.

After barreling ashore Tuesday in Northern California, the storm moved to the central coast, where the two-day rainfall total neared 14 inches in San Luis Obispo County, the National Weather Service said. By Thursday evening it had moved all the way down the state, drenching Southern California.