Moderna's medical officer on how it felt to learn vaccine is 94.5% effective

London (CNN Business)Positive reports on the efficacy of Covid-19 vaccines from Moderna and Pfizer are extremely good news for a world battling a crippling pandemic.

This just in: Moderna (MRNA) has announced that per early results, its Covid-19 vaccine is 94.5% effective.
Stocks — which jumped dramatically when Pfizer said its vaccine was more than 90% effective last Monday — are rallying again. Futures of the S&P 500, which hit an all-time high on Friday, are up sharply. The Dow is also in record territory.

Breaking it down: Wall Street sees positive vaccine developments as a major confidence booster, firming up expectations for a big economic rebound next year. If companies have faith that vaccine distribution can begin in late 2020 or early 2021, they can start to make more concrete plans for the future.
Unfortunately, vaccines won’t prevent an extremely tough winter. Many European countries are still under modified lockdowns, and the United States surpassed 11 million coronavirus cases on Sunday. At least 45 states have reported more new infections this past week than the previous week, according to Johns Hopkins University.

“The good news on vaccines is tempered by the fact that they won’t come soon enough to prevent a difficult winter for many economies,” Neil Shearing, group chief economist at Capital Economics, said in a note to clients on Monday.
The contraction in activity between October and December expected in Europe won’t be as bad as what countries experienced this spring.
“Clearly the lockdowns this time around are much less stringent than they were earlier in the year,” Ben May of Oxford Economics told me, noting that schools mostly remain open.
He also pointed to a lower fear factor, which is likely to boost the economy through decreased voluntary social distancing, and a healthier environment for exports.
Oxford Economics now predicts that global growth will come in around 0.7% for the fourth quarter, compared to roughly 7% between July and September.
“The pace of growth in [the fourth quarter] has fallen back very sharply,” May said.
The global situation is made better by the recovery in China, which said Monday that industrial production in the world’s second-largest economy rose nearly 7% last month. Retail sales rose by slightly more than 4% — the fastest pace this year.
Big picture: News on the vaccine front does change the outlook for 2021, however. “It’s possible to believe that life will start to become a bit more normal next year,” Shearing said.
May said that indications there will be viable vaccines firms up expectations for a sizable rebound in activity by the middle of next year. Per Shearing, if all goes well with immunization, top economies could “return to pre-virus levels of output around six months earlier” than expected.

PNC to buy US business of Spain’s BBVA for $11.6 billion

PNC (PNC) is spending billions to cement its place among America’s largest banks.
The Pittsburgh-based lender is buying the American unit of Spanish financial group BBVA for $11.6 billion, the companies said Monday. The tie-up will create the fifth-largest US retail bank by assets, PNC said. 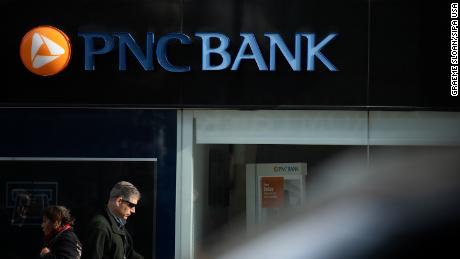 The all-cash deal will be the second-biggest banking sector merger since the global financial crisis, coming nearly two years after BB&T bought SunTrust for $28 billion to create Truist. Shares in BBVA surged as much as 16% in London.
PNC said in a statement that the transaction “significantly accelerates” its national expansion strategy. BBVA’s US subsidiary has over $100 billion in assets, and operates more than 630 branches in Texas, Alabama, Arizona, California, Florida, Colorado and New Mexico.
“When combined with PNC’s existing footprint, the company will have a coast-to-coast franchise with a presence in 29 of the 30 largest markets in the US,” PNC said.
Scoreboard: The combined entity will have more than $560 billion in assets, placing it behind only JPMorgan Chase, Bank of America, Wells Fargo and Citigroup when ranking US retail banks by size.
Investor insight: The deal comes amid a trying year for US banks, which have been weighed down by rock-bottom interest rates. They’ve also had to set aside billions of dollars to cover bad debts stemming from the coronavirus recession.
But Wall Street analysts, buoyed by hopes for Covid-19 vaccines, are increasingly confident that US bank stocks can turn it around in the coming months. The KBW Bank Index, which tracks US lenders, jumped 11.5% last week for its best performance since June.

In the world of ice cream, one company reigns supreme. Unilever, whose brands include Klondike, Ben & Jerry’s and Magnum, sells ice cream in 63 countries around the world. The Anglo-Dutch firm commands almost a fifth of global ice cream sales, a bigger share than its next four competitors combined, according to market research firm Euromonitor. 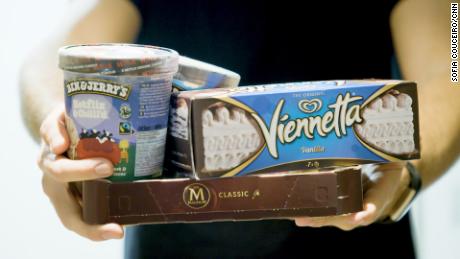 Now, as the coronavirus pandemic rages on, the company is plotting to conquer one final frontier: ice cream delivered to your home on demand, my CNN Business colleague Hanna Ziady reports.
Ice Cream Now, the company’s home delivery business, has boomed during the pandemic. What began as a pilot program in 2016 at Deliveroo’s London headquarters with a single freezer is now available in more than 100 cities.
“As an ice cream gang we’re a bit messianic,” said Matt Close, the company’s executive vice president for global ice cream. “We believe that people want it, we’ve just got to find a way to get it to them.”
Through partnerships with the likes of Uber Eats and Domino’s Pizza, customers can get ice cream delivered within 30 minutes. The company has even teamed up with Terra Drone Europe to explore delivery by air.
The plan is working: The growth of ice cream at home is on track to more than offset the collapse in its out-of-home ice cream revenue this year, which includes sales to restaurants and catering companies. Looks like Ben & Jerry’s picked a good year to launch a flavor called Netflix & Chilll’d?