This expansionary cycle might be the shortest one out of the last three in the US due to the speedy and powerful rebound seen in the past 12 months, as well as inflation that’s primed to make a comeback after 30 years, according to Andrew Pauker, an equity strategist at Morgan Stanley.

About a year ago, COVID was becoming a bigger threat to the market as the outbreak filled the world with uncertainty and fear. One of the consequences included a quick economic downturn in February 2020 from the longest expansionary phase in more than 100 years, according to the National Bureau’s Business Cycle Dating Committee, which maintains a chronology of US business cycles.

Describing the economic shock caused by COVID, Pauker said in a note released on Tuesday that it was more of an external shock rather than an imbalance in macroeconomic forces. That made it easier for the Fed to take on the costs to get the economy back on its feet. And in turn, the economy is likely to speed through the early phase of the business cycle especially when compared to the previous one.

“The strength of the recovery doesn’t just end there. Our forecasts imply not only that the economy will reach its pre-COVID levels of output quicker but that it will rise above its pre-COVID path in 3Q2021,” he wrote.

And some people have already set their sights on inflation this year. Michael Hartnett, the chief investment strategist at BofA Global Research, wrote in a recent note to clients that the bank’s inflation survey showed that 61% of analysts saw their companies raise prices in recent months.

Meanwhile, supply in the economy is struggling to keep up with rising demand that is driven in large part by Biden’s $1.9 trillion bill and a potential infrastructure package, Pauker said. This could pave the way for inflation to stage a comeback, after being a no-show during the last 30 years.

But typically when inflation reaches the Fed’s 2% target, the central bank resorts to a tighter monetary policy that raises short-term interest rates, which aims to reduce inflation. Morgan Stanley economists believe this could happen in the third quarter of this year or sooner, Pauker added.

The bank’s equity strategists have also called for a V-shaped earnings recovery by March 2022, which means it will take just 25 months for earnings per share to return to its previous peak.

“That would make this EPS recovery the second-fastest since 1970. It’s interesting to note that quicker EPS recoveries tend to coincide with shorter cycles,” he wrote, adding that this cycle will probably last 42 months.

But to answer the question of where we are in the business cycle, Pauker’s team turned to their cross-asset cycle model that showed we are most likely in the late stages of the “repair” phase, as can be seen below. 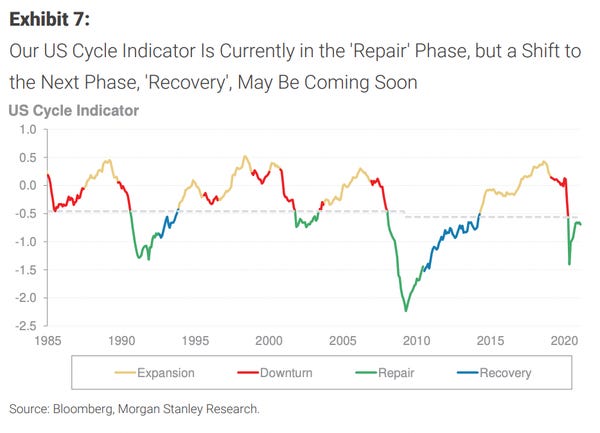 Besides, we could soon be entering the “mid-cycle” or “recovery” phase in the fourth quarter of the year, and there’s a 15% chance of jumping straight to “late-cycle” within the next year, he added.

“We think risk-asset leadership is already shifting from ‘early-cycle’ to ‘mid-cycle,’ and that investors should position accordingly,” he wrote.

The speed of the shifts in cycles within single stages of the broader business cycle opens up opportunities in some areas of the market that benefit from that transition. Pauker said that autos, retailing, consumer durables, and industrials are the most attractive in this environment.

But when it comes to single stocks, he is recommending getting a hold of “recovery” outperformers versus the Russell 3000 which offer earnings upside at an attractive valuation.

That being said, he compiled a list of stock ideas across multiple sectors that have been outperformers in the “recovery” phase with attractive prices and earnings upside potential.

Some of the names within the industrials sector include AGCO, American Woodmark, Carlisle Companies, Cornerstone Building Brands, and Deere & Company (John Deere).

Within the retailing industry, it’s Bed Bath & Beyond, and Lowe’s Companies.

And in the autos space, LCI Industries, Patrick Industries, and Winnebago Industries could be winners this cycle.