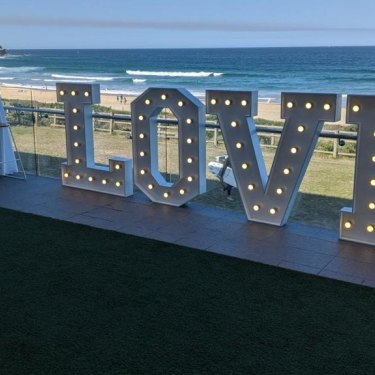 Leaked photos from EISS October staff party. A spokeswoman for Mr Hutchison said staff did not receive bonuses last year so morale was built through events like this.

It was a warm spring evening in early October last year at the Maroubra Surf Life Saving Club on Sydney’s eastern beaches, where about a dozen EISS employees had gathered for a party.

The club, less than five kilometres from former EISS Super chief executive Alex Hutchison’s family home, had been sponsored by the $6 billion fund for years.

EISS’s senior employees and their partners were invited to the club for a quarterly celebration, all expenses paid. Unlimited bar tab, exclusive use of the space, sit down three-course meal, canapes, cocktails, the works.

“After that we went to a pub and the bar tab and taxi fares home were all covered,” says one person who attended the event.

The Age and Sydney Morning Herald have revealed in recent weeks that EISS has spent significant amounts of money on staff entertainment, overseas trips and sponsorship deals linked to senior managers’ families.

The reports have thrown the super fund into turmoil, causing the abrupt resignation of its chief executive, chair and three senior directors. Amid the chaos, a junior employee was instructed to cancel the fund’s Christmas party to be held at the Museum of Contemporary Art this summer.

The reports have come amid increased scrutiny of the expenses and political ties of the $3.3 trillion super industry.

Under new laws introduced in July, the federal government has raised the bar for super fund spending to ensure it financially benefits members and has forced funds to undertake a yearly performance test conducted by the Australian Prudential Regulation Authority. Both EISS and Maritime failed this test and must now reduce fees, improve returns or face a ban on accepting new members.

The Maroubra party was one of the many lavish events bankrolled by EISS Super and was held in the same month the fund inked a $3 million sponsorship deal with the NRL, that for many within the fund, was the final straw.

When COVID-19 caused men to stop shaving their beards, Gillette was forced to rein in its marketing budget and axed its ball sponsorship with the NRL. The little known super fund for energy workers swooped in to become the newest face of New South Wales’ favourite sport.

A spokeswoman for ex-CEO Hutchison says staff were not paid bonuses last year and events were “hosted periodically for the purposes of morale and team bonding”, adding the NRL deal was approved by the board and included input from independent experts.

Questions around how super funds spend members’ money are not new. Hostplus faced a grilling during the 2018 banking royal commission over $260,000 spent on tickets for the Australian Tennis Open. Chief executive David Elia defended the expenses as necessary in a competitive marketplace.

Overall, the not for profit industry super sector emerged from the banking royal commission unscathed while systemic misconduct at the major listed wealth companies and big banks caused chief executives to resign and shareholders to revolt. And as a group, the industry funds have consistently beaten the retail funds on fees and returns by a mile.

But now, Liberal MP Tim Wilson has threatened to call EISS executives to front an economics committee to explain “corrupt” and “scandalous” expenses while the government’s reform package to stamp out largesse and kill underperformers has reignited the bitterly fought superannuation wars.

Superannuation has been a political football since it was made compulsory by former prime minister Paul Keating in 1992.

The industry super funds were borne out of the trade union movement, with union officials given designated appointments to well-paid board roles. The unions benefit the funds by setting up default arrangements with large employers. But senior union insiders claim the relationship has caused super to become a “cash bag” for the unions.

“When you really get down to it, it’s just a bag of gold for the Labor Party and their mates,” says one insider for the Electrical Trades Union, linked to EISS. “There’s no integrity there.”

Maritime Super has been under increasing pressure to merge due to long-standing underperformance. It has now reached a deal with hospitality fund Hostplus to wholly outsource investment management, but has retained the fund’s board at full pay.

EISS and Maritime Super were both exposed to have below-average returns and above-average fees when APRA launched its ‘heatmaps’ initiative in December 2019. Despite this, directors and executives at both funds were given pay rises.

Over the past two financial years, EISS directors saw their take home pay swell by more than 30 per cent. The chairman was given a 47 per cent pay rise to $115,462 and both Maquarie bank’s Michael Roche and charity director Juliet Dunworth, saw pay rises of 40 per cent, who both quietly resigned on Thursday and have not responded to requests for comment.

Maritime Super’s leadership team were also given modest pay rises in recent financial years, in some cases bringing fees in line with the country’s top-performing funds. For example, Maritime Super’s chairman’s annual fee was bumped up to $114,614 from $111,818 from the 2018-19 year. This compares to the country’s largest and leading super fund, AustralianSuper, whose chair is paid a base fee of $130,880, according to recent financial statements.

However, multiple insiders claim Maritime Super’s resistance to merge may be linked to the aligned union not wanting to have its influence weakened. Maritime Super has defended its sponsorship of union events, claiming the events present an opportunity for the fund to spruik its services and engage with members. It also maintains all board remuneration is in line with strict prudential regulations.

EISS has donated more than $735,000 to the Electrical Trades Union over the past two financial years and a further $350,000 to another NSW energy union, the United Services Union. But the fund retains close ties on both sides of politics. Hutchison, a former Australian Federal Police officer and corporate regulator, hosted a catered breakfast for NSW deputy premier John Barilaro in March last year.

The breakfast was funded by EISS as part of its membership of the NSW Business Chamber, where Barilaro speaks at events attended by a collection of business leaders. A spokeswoman for Hutchison says more than half of the fund’s members are in regional NSW and the breakfast was attended by various industry representatives.

EISS regularly asks staff to fill in a survey answering questions about the fund’s corporate culture and leadership. Its ‘Kincentric Best Employer’ status has been one of the fund’s key branding assets, after achieving a top quartile score last year.

However, this year’s score has not been as widely touted after scepticism with the NRL deal and increasing hostility towards leadership caused a 15 per cent drop in approval ratings, remaining slightly above industry average but robbing the fund of its title.

Multiple insiders say at the best of times, these surveys paint a rosy picture that is out of step with the experience on the ground. This masthead revealed earlier EISS was forced to hire external solicitors WorkDynamic to probe bullying complaints after head of people and culture Lisa Elias made a formal complaint against a senior manager.

The fund has dismissed the allegations, writing many off as unsubstantiated, but has refused to release the full report into the investigation. Former staff say the “toxic” culture is widespread and many have been left traumatised and forced to sign non-disclosure agreements on their way out.

Staff claim they were regularly discouraged from asking questions about expenditure they saw as problematic and were berated or muscled out of the company if they tried to change the status quo.

These allegations of a culture resistant to scrutiny are replicated at Maritime Super, where multiple former employees have described a fund stuck in its ways, albeit without formal bullying and harassment complaints.

While two Maritime Super’s staff members claim they never witnessed largesse and enjoyed the working experience, others say parts of the fund had a reputation for its “boozy” culture where $300 bottles of wine were bought on the corporate card.

Maritime Super does not have an internal policy for acceptable use of its corporate cards, and financial planners claim they were encouraged to spend big on entertaining employers when travelling the country.

“There were never any rules, processes when we were given the cards,” says one former Maritime Super employee. “The opportunity was there to abuse it.”

Our Breaking News Alert will notify you of significant breaking news when it happens. Get it here.