RLX Technology stock sank as much as 45% on Monday after a report out of Reuters said the Chinese government is looking to increase regulations on e-cigarette manufacturers.

Shares of RLX are down over 60% since the company raised $1.4 billion in its January IPO.

On Monday, The Ministry of Industry and Information Technology (MIIT) and China’s State Tobacco Monopoly Administration posted draft regulations online that are set to clarify and enhance existing e-cigarette laws.

According to reports from the Global Times, a newspaper owned by the Chinese Communist Party’s People’s Daily newspaper, a clause called Article 65 will be added to the Detailed Rules for the Implementation of the Tobacco Patent Sales Law of China.

The clause will help the State Tobacco Monopoly Administration step up its regulation of e-cigarette manufacturers and build a new “market supervision mechanism” for the industry. Regulators are soliciting public opinions on the revision until April 22, per the Global Times.

The move towards increased regulation of e-cigarettes comes after a November 2019 decision by Chinese regulators to forbid e-commerce platforms from selling e-cigarette products.

Despite the tightening regulations, RLX Technology posted revenues of $324 million and net income of $16 million for the nine months that ended September 30, 2020. The figures surpassed the company’s full-year 2019 top and bottom-line results, according to the company’s latest SEC filings.

RLX Technology was able to boost revenues due to the intense demand for its products in China.

According to the World Health Organization, there are more than 300 million smokers in China and the country accounts for nearly a third of the world’s total smoking population.

Cigarette sales also generated 5.45% of China’s overall tax revenue in 2018, per Reuters. And data from Daxue Consulting shows e-cigarette sales are expected to more than double by the end of 2022. 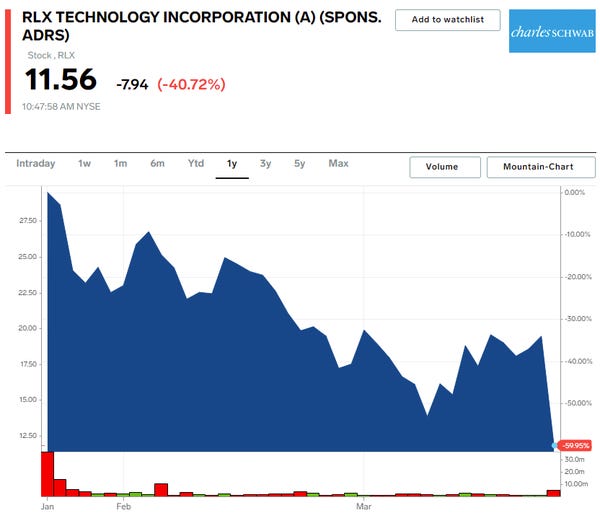