Total net cash inflows for the six months ended December 31 was $1.4 billion, taking Magellan's average funds under management 35 per cent higher to more than $72.1 billion. The share of retail investors piling into its funds jumped by 43.5 per cent to $475 million. 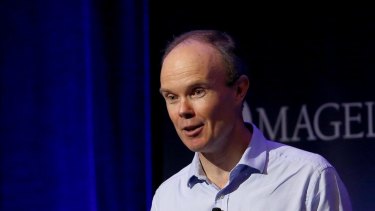 Hamish Douglass was one of the best-performing Australian fund managers last year, reaching a 9.8 per cent return for his global fund.Credit:Daniel Munoz

The fund manager has experienced average monthly retail net inflows of about $79 million over the six months to December 31, up from $55 million a month in the previous corresponding period. The retail component of its funds under management now makes up 27 per cent of the total.

Magellan's adjusted net profit jumped 62 per cent to $176.3 million in the December half.

Investors celebrated the set of good numbers, pushing Magellan Financial's shares up almost 10 per cent to record an intraday high of $32.16.

Piling in for better returns

Mr Douglass was one of the best-performing Australian fund managers last year, with the fund returning 9.8 per cent.

The fund has consistently outperformed its benchmark MSCI World NTR Index over the long term.

Chief executive Brett Cairns said the comparison was slightly skewed, as the previous dividend had been paid under a lower dividend payout policy.

The company’s new policy is to pay dividends of 90 per cent to 95 per cent of net profit — excluding performance fees — of the group’s funds management business.

He said the growth in funds under management had resulted in a 28 per cent increase in management and services fees to $228.1 million.

Profit before tax and performance fees of the funds management business was up 41 per cent to $182.3 million.

"We continue to focus on our clients and delivering on our investment objectives, which ultimately leads to strong financial outcomes for our shareholders,” Mr Cairns said.

Risk focus has been an essential element in navigating the recent market.

As at December 31, the group's funds under management were split between global equities (74 per cent), infrastructure equities (17 per cent) and Australian equities (9 per cent).

"This risk focus has been an essential element in navigating the recent market," he said.