A Swiss prosecutor is probing whether the late Saudi king broke any laws when he transferred $US100 million ($129 million) to a fund controlled by fellow royal Juan Carlos I of Spain in 2008.

Last month, a hearing was held behind closed doors in Geneva to discuss a legal opinion that prosecutor Yves Bertossa sought from scholars on whether the payment by the late King Abdullah could constitute a crime under Saudi law, according to documents seen by Bloomberg. Bertossa first solicited the advice in a July 23 letter to the Swiss Institute of Comparative Law. 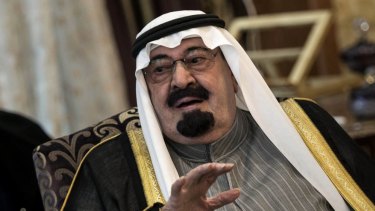 King Abdullah reigned for nearly a decade until his death in 2015 at age 90.Credit:AP

Bertossa’s request for an opinion came just a month after Spanish Supreme Court prosecutors announced they would investigate whether Juan Carlos, who abdicated and lost his immunity from prosecution in 2014, could be pursued for possible crimes linked to a high-speed train contract in Saudi Arabia won by a Spanish-Saudi consortium.

Bertossa’s scrutiny of King Abdullah, the half-brother of the current king, could roil Switzerland’s longstanding role as a preferred destination for Saudi wealth. Middle Eastern investors had 432 billion Swiss francs ($600 billion) stored in the country at the end of 2019, according to the Swiss Bankers Association, nearly a fifth of the total. Saudis flock to Geneva every July and August to avoid the fierce desert heat, staying in luxury villas along Lake Geneva.

In his letter, Bertossa said his probe had been focused on “determining whether this alleged gift should be connected to a corruption scheme.” The letter didn’t mention the rail contract.

Even “assuming the hypothesis that this payment was a gift,” he continued, it raised the question of whether there was “disloyal mismanagement of public interests on the part of the former king of Saudi Arabia.”

Bertossa referred in his letter to an offence in the Swiss Criminal Code that translates as “misconduct in public office” in the official English-language version.

The payment was a thank you from King Abdullah for Juan Carlos’s help organising a conference in Madrid on religious understanding, according to a Saudi diplomat cited by Spanish newspaper El Pais. The paper reported last year that Bertossa, in a separate letter to a Spanish judge, drew a direct link between the contract and the Saudi payment, and said that the winning bidders offered a discount of as much as 30 per cent.

Qualifying for the multibillion-dollar contract had already begun in 2008, the year of the Saudi payment. The two separate tenders for the Phase 1 civil engineering works and the Phase 2 rail contract were then finalised in 2008 and 2009, respectively. The consortium that won the Phase 2 contract in 2011 said in a statement it denies making any agreement or payment related to the award of the project. 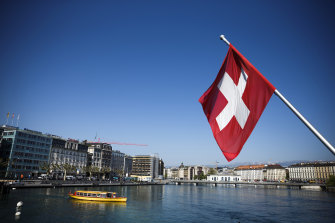 Middle Eastern investors had 432 billion Swiss francs stored in Switzerland at the end of 2019.Credit:Bloomberg

In international cases, Swiss prosecutors often prefer to establish whether a comparable offence exists both in Switzerland and the country in question before proceeding with a fresh line of inquiry.

According to the Swiss institute’s December response, seen by Bloomberg, misconduct in public office as defined in the Swiss Criminal Code also exists in Saudi Arabia and would, in theory, be punishable under Saudi law with a sentence of as much as 10 years and a fine of 20,000 riyals ($6877). But the written opinion didn’t address the specifics of the case Bertossa is investigating and so didn’t discuss the prospect of immunity for a monarch – living or dead.

The author of the opinion at the institute, a research centre attached to the Swiss Federal Department of Justice, declined to comment.

The money at the centre of the inquiry was paid into the Panama-registered Lucum Foundation. The foundation, of which Juan Carlos was the sole beneficiary, was established to receive the Saudi donation and was dissolved around 2012. Juan Carlos left Spain for the United Arab Emirates last year, according to the BBC.

His lawyer, Javier Sanchez-Junco, didn’t respond to requests for comment. The Swiss bank which received the payment and has been investigated by Bertossa denies any wrongdoing.

Bertossa’s inquiries come as Saudi Arabia’s current heir to the throne, Crown Prince Mohammed bin Salman, has declared fighting corruption a key priority. In 2017, the prince turned Riyadh’s Ritz-Carlton hotel into a temporary jail during a controversial anti-corruption campaign that targeted Saudi’s elite. Most of the detainees were released after agreeing to hand over billions of dollars in private settlements. Dissidents say the prince uses corruption allegations selectively to undermine potential opponents and critics, a charge officials deny.

King Abdullah reigned for nearly a decade until his death in 2015 at age 90, when he was replaced by King Salman, the crown prince’s father.

Given that King Abdullah is no longer alive, Bertossa’s next steps in his investigation are unclear. As Geneva’s top prosecutor, however, he typically juggles other financial crimes and corruption cases at the same time.

In January, Bertossa secured a surprise conviction of Israel mining tycoon Beny Steinmetz for bribery, in what was heralded as a landmark decision for the prosecution of commodities-related corruption. Steinmetz denies any wrongdoing and is appealing the verdict.